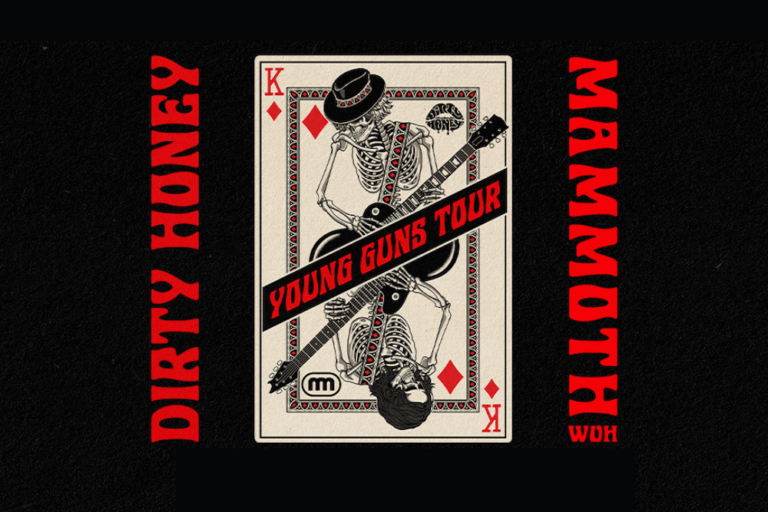 The Young Guns – Rock ‘N’ Roll’s Tour of the Year

Nobody is born a rockstar. Even if they were born to musical legend parents or predisposed to the work of the Beatles and Stones, they’re not a rockstar. A person can certainly have rockstar qualities at a young age, but they aren’t a full-fledged rock ‘n’ roll musician until they put the work in to find themselves and their sound. For some, that takes months or years. For others, decades. For Wolfgang Van Halen, it was a mix of both. The singer-songwriter grew up on and around stages. He has been playing and writing, recording and riffing, for as long as he can remember. However, it was just days before he turned 31 when he told us how gratifying it is to finally be his own artist – the rockstar he worked diligently to become.

The age in which an artist truly comes into their own doesn’t make a vast difference, but it can play a role in how you are perceived. A band like Dirty Honey are a stellar example, because no matter how fresh their sound is, it will always be equated to the bands who came long before their 2017 formation. Even the most open-minded music lover would have a hard time associating genuine, homegrown blues rock with the modern day music industry. Yet here are Dirty Honey, in all their groovy glory, with their name on the map and an ever-growing discography to keep them there. Marc Labelle, vocalist for the group, is 30-years-old himself, and knows better than anyone that music has no age, having grown up on the sexy swagger of Aerosmith (and now emulating it as a frontman).

This rock and roll trek around the country, aptly named the Young Guns Tour, is a joint venture through and through. Each act stands their own ground without holding back, leaning into grit and valor as if their remarkable talent wasn’t enough to win the world over… which it is, in case you’re not already one of the many people who have contributed to both Dirty Honey and Mammoth WVH’s millions of streams online. Together, they make up this tour, but each band is their own stylistically with their own experiences under their critically-acclaimed belts.

Dirty Honey is one of the biggest and most successful independent bands of our time, and as a rock band, that’s no easy feat where everyone who is anyone can hop on Garageband and throw out some power chords. They’re so much more than that and the way they climb the charts are just one example of proof. Another would be their intense, devoted fan base – one that Marc LaBelle can’t help but show appreciation for and gush about in our conversation. “They’re open-minded listeners,” he says with an evident smile in his voice.

Their fans and Mammoth WVH’s fans are meshing beautifully, as well, jamming to each set of each band each night of this tour. “Our fans are like crossing the line to appreciate the other band that they maybe didn’t know of before the show started. To me, that’s a benefit, obviously, for the state of rock and roll. I’m genuinely impressed by our fans’ love, but we’re all fans of music, too. Dirty Honey are big fans of Wolfgang’s and all he’s doing, so, I’m more than happy to raise the flag for him and carry that torch and be supportive. We are really wishing the best for him and his set every show – in a genuine way. I feel like there’s not a lot of bands I can really say that about these days, you know? I am truly excited about all he’s doing and what we get to do alongside him on these stages and on this tour.”

Wolfgang Van Halen, a proud fan of all kinds of music, understands that wholeheartedly, telling us about how he’s as much of a fan of Foo Fighters (of whom he’s up against for Best Rock Song at this year’s Grammy Awards) as he is LaBelle’s band. “It’s a really great, great time watching Dirty Honey be rockstars. They’re all great. It’s a fun night of music, too, because while we are rock bands, we’re both very different in our sounds. It’s not sort of a one note, boring sort of night. You’re definitely gonna be entertained easily by both [Mammoth and Dirty Honey].”

Speaking of Grammys, The Aquarian had to ask Wolfgang Van Halen about his nomination and how stoked one must be to find out about it. “My manager called me and woke me up,” WVH starts with a laugh. “My team – I call them the trusted humans – is me, my manager, my uncle, and my business partner. We are sort of the brain trust of decision making when it comes to the band. My manager called me the morning of the announcements and told me to call one and he was gonna call the other and get us on a conference call. Then he said it and I was just kind of like, “Holy shit, am I still dreaming? Or did I really wake up? It’s really, really crazy.”

These two bands know what it’s like to balance out a setlist and a stage with another band and other sounds, because as superb as they are as headliners, they cut their teeth recently with just as roaring and notable bands, such as a grand tour with Gun ‘N Roses for Mammoth WVH, whose audience may or may not have known of the Van Halen legacy’s five star solo band.

“That’s the big difference between the two: when you’re opening for someone big, it’s always an incredible opportunity, but at the same time, you’re sort of auditioning for their attention. Because, really, they’re not there you. Normally you see moments where like, by the end of your set, you’ve kind of won over the people who came to see the headliner. When it comes to this recent tour, though, it’s straight up out of the gate a good time. People are ready to see you and they just go nuts, so it’s been a really fun time so far because it’s nuts to me to see all these different people singing lyrics that I wrote. That that’s a whole new thing for me, you know? I’ve been touring for 15 years, but I feel like I’ve been doing it for the first time with Mammoth since I have such a much more of a personal stake with all the music that we’re playing.”

LaBelle echoed the sentiment in regard to Dirty Honey coming off of a slew of dates with The Black Crows, explaining the notable differences between being an opener and a co-headlininer. “More than anything, it’s just been great to get into a room with your fans and people that are excited to see you rather than the headliner and just so happen to discover you through them. The fans know more about us at this point and they’re familiar with the material, so it’s become a more exciting environment for both Dirty Honey and them.”

“When you put the mic out to get people to sing along during an opening set it’s not too active of a response, but when you do it at your own headlining show, everybody’s thrilled to sing back to us. We try to help create an environment that’s fun and find that sense of community because everybody is there to see an artist that they all love is, so they have to be present, but we have to be really present.”

No matter who they’re coming out for on this run, fans are treated to a variety show that is rooted in musicianship and instrumentation is the intricate and superb, yet a whole lot of fun. The camaraderie between bands on stage and off is palpable, teetering on the edge of becoming a rock and roll family. “[Mammoth] and Dirty Honey are definitely both rock, but there are different flavors in there that people can get exposed to and find common ground with,” Marc LaBelle comments.

We can’t help but enforce how important creating a community is at a live show, especially in only semi post-pandemic times. Becoming a unit as your rock out, jam, and mosh to hit songs and deep cuts adds to the worthwhile and beloved aspect of a concert. The tri-state knows how to do that better than most, hosting bands just like these two and putting on shows just like the ones we hope you head to at Webster Hall and Starland Ballroom.

“That’s one of the places that we started out in and finding our footing in – New Jersey,” the Dirty Honey frontman says. “Asbury Park at The Saint, actually. That was one of our first real gigs that we got playing on the east coast. To the point of watching the audience get even more into the music and watching the fan base grow, it’s just gotten exponentially bigger in that area since we started, so it feels like we must be on the right track.”

When asked what he’ll take away from the Young Guns Tour, local tour dates or otherwise, the “Distance” singer explains how having “more seat time” works in his – or any band’s – benefit. “It’s the 10,000 hour rule: the more you put towards your craft, the better you get. I’ve noticed, at least personally, that I’ve become a better front man. I’m better at talking to the audience and getting more out of the crowd, sort of pulling reactions out of them way better than I was on the Guns ‘N Roses tour… or even the headlines in between this and the [G’N’R] tour. You get more time in the seat, you get better, and you create the energy.”

Wolfgang Van Halen is touching people with his craft, which he works at even today, as a headliner. His Grammy nod (a first for him) is one thing, but the way he is transcending generations with his take on hard rock is something else, and his ability to connect with audiences? That’s being hit out of the park today more than ever before. “This all just so insane. I never could have seen the response to this and the music, for it to reach out how it had has. I am very grateful.”

FOR TICKETS AND INFORMATION ABOUT THE YOUNG GUNS TOUR AND THE NYC AND NJ DATES THIS WEEK, CLICK HERE! KEEP UP WITH THE BANDS BY CHECKING OUT THEIR WEBSITES DIRTY HONEY AND MAMMOTH WVH!