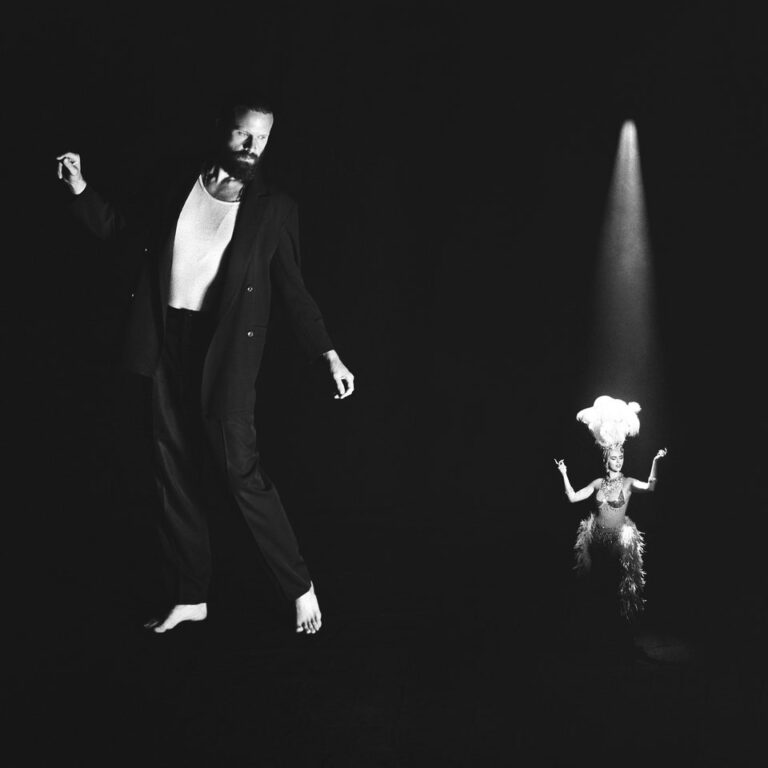 Father John Misty (a.k.a Josh Tillman) returns with new music this week with his fifth studio album, Chloё and the Next 20th Century. The album title is cleverly crafted by the opening track, “Chloё,” and the final track, “The Next 20th Century.” Ahead of its release, Tilman had released “Funny Girl,” “Q4,” “Goodbye Mr. Blue,” “Kiss Me (I Loved You),” and “The Next 20th Century” as singles all available on streaming platforms right alongside the dreamy full-lgenth record.

Josh Tillman began making music in a number of groups during the 2000s, including four years with Fleet Foxes. After making the decision that he wanted to move away from the gloomier music he was making, Tillman moved to Los Angeles, changed his persona to Father John Misty, and never looked back. Father John Misty became popular in the folk rock genre, making haunting yet upbeat tracks such as the beloved “Hollywood Forever Cemetery Sings” and “Mr. Tillman.” The singer-songwriter has been featured on Lana Del Rey’s albums, too, and has written music for some of the biggest names in music, like Lady Gaga and Beyoncé.

The new album of his keeps a loose hold on his original indie rock sound, but moves on to incorporate elements of Old Hollywood style music, predominantly from film scores. Nearly every song on the album encapsulates the dramatic melodies of the Golden Age and feel like they would fit into the days of Elizabeth Taylor and Marilyn Monroe. The instrumentals are arranged with warmth and delicacy, having glamorous melodies and blues elements, as well as moments on the piano and brass solos that feel fresh out of Singin’ in the Rain or Gone With the Wind.

Opening with “Chloё,” which feels akin to a performance at an underground jazz club with its ethereal tone, has Tillman singing directly to the song’s subject. This intro transitions to a seventies singer-songwriter vibe for “Goodbye Mr. Blue,” but immediately returns to the classic and grand feel of Old Hollywood by the third track. “Funny Girl” is reminiscent of Grease’s “Beauty School Dropout” with the way Misty addresses the girl not by her name, but by the way he sees her; backing up his points with a choir and grand orchestra, as the white-clad pop star did in the film.

Lyrically, though, the songs on this album are heartbreaking, with “Goodbye Mr. Blue” describing two lovers’ last encounters together, and “Funny Girl” being about having a crush on someone so captivating, but the timing was never right for them to fall in love. Tillman’s music always shows us the most cynical side of himself. Sarcasm about relationship norms are his bread and butter, but these 11 new songs are more heavily inspired by these darker stories than ever before. “Kiss Me (I Loved You)” is a slow, piano-driven song with the story of wanting to be near someone that the narrator used to be deeply in love with, yet wants to say goodbye to now. These themes are deep and draining, but the style of the music keeps us drawn in and entranced, wanting to listen intently to the narrative and this performer’s evolution to now.

In his typical fashion, the Mist makes the last track on the album feel like a closing, as if he has just performed a show for his listeners and the curtains are closing. The final words he leaves us with are “I’ll take the love songs and the great distance that they came.” This last song sounds the most like his past music and feels like a ballad dedicated to the entire album itself. With it being the most recent release from the album, fans are already buzzing about how this is the best single so far, with it’s brass and electric guitar solos that set it apart from the Old Hollywood theme and make it so much monumental sonically – so much more him.

Back in 2017, Father John Misty told The New Yorker, “If you can’t hold two ideas in your head at the same time, you’re not going to get what I do.” This declaration holds up today as he sings of modern romance and heartbreak, while seamlessly using one of the oldest styles of musical arrangements that is enjoyed today. This album makes listeners feel like they are traveling backwards in time, while standing still, grounding in the present.

CHLOE AND THE NEXT 20TH CENTURY IS OUT NOW ON ALL PLATFORMS!