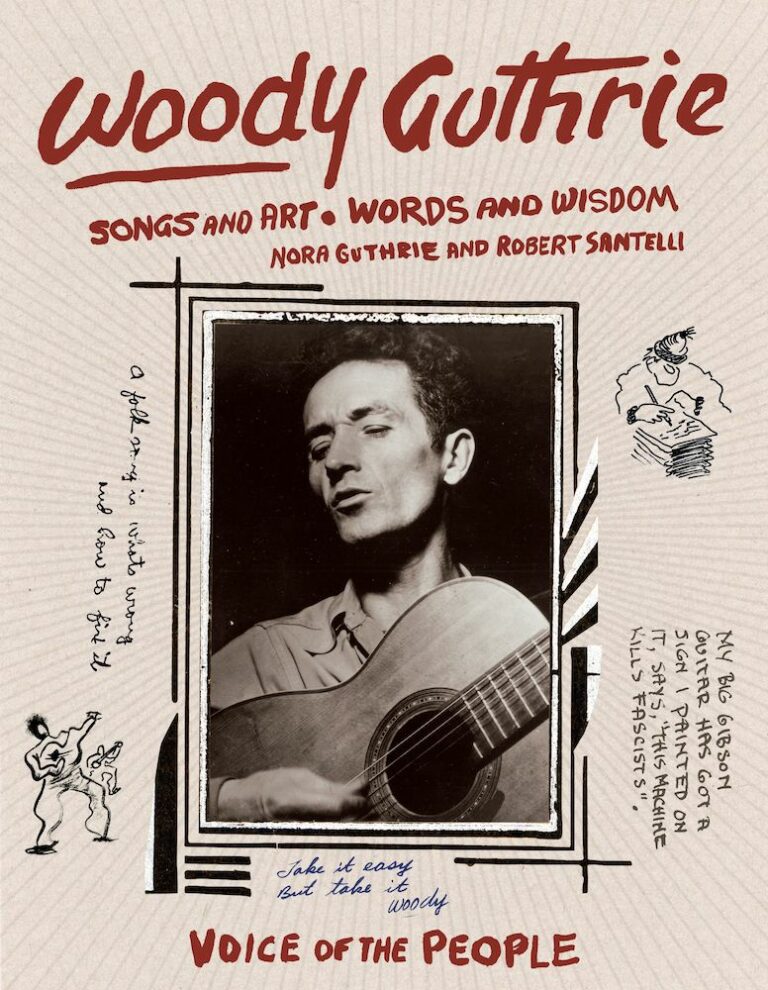 Woody Guthrie:  Songs and Art * Words and Wisdom (Chronicle Books) is a lavish hard-cover book collated by the legendary folk singer’s daughter Nora Guthrie and Robert Santelli.  Let’s give props to one of our own:  Santelli was the Aquarian Weekly’s Jersey Shore correspondent before he left us all in the dust to be handpicked by Jann Wenner at Rolling Stone in 1993 to be one of the original curators of the Rock’n’Roll Hall of Fame. So he moved to Cleveland and served in that capacity for seven years until he got a phone call from Paul Allen [1953-2018], the billionaire NBA/NFL owner who started Microsoft with Bill Gates, who flew him to Seattle to start MoPOP (The Museum Of Pop Culture). The Santelli family fell in love with the Pacific Northwest (they live there still). Then he goes and starts The Grammy Museum in Los Angeles, writes 12 books and develops the Woody Guthrie Center in Tulsa Oklahoma with Nora Guthrie. All this from a kid who started out as a beach bum surfer dude who loved Bruce and could string a few sentences together?

After traveling to India for the Ravi Shankar centennial, he called home.

Mike Greenblatt: Dude, you’re like king of the world now!

MG: Just remember who gave you your start.

MG: Well, actually it was Jim Rensenbrink, the original owner here at the Aquarian. I just assigned the stories.

BS: I was single then so I could run down the shore every weekend and go to The Stone Pony, Upstage or The Fast Lane.

Suffice it to say, Santelli and Nora Guthrie are keeping Woody Guthrie where he belongs:  as America’s greatest folk-singer, a man who wrote poetry, painted, illustrated, wrote novels, composed children’s songs, kept journals, was a profuse letter-writer, and philosopher. The man was as passionate about politics as he was about the plight of poor people.

He wrote provocatively about economic inequality, immigration reform, fascism, war, corruption, greedy capitalism, patriotism, environmentalism, and spirituality – topics that resonate today even more than when he first wrote them. He wrote children’s songs. He wrote protest songs. In fact, when he was ailing in a New Jersey hospital with the disease that claimed his life, Huntington’s Disease, he was visited by Bob Dylan whose early work blatantly copied Guthrie’s tone, demeanor and outrage.

Guthrie died October 3, 1967, but not before a generation of students on college campuses across the country took his cue and the folk music boom was on. His song “This Land Is Our Land” should be our National Anthem. His song “Old Man Trump” specifically pointed to Fred Trump, the father of America’s worst president, as a racist crooked slumlord who cheated and abused those who had the misfortune of living in one of his horrible buildings. Woody Guthrie suffered such an indignity and wrote about it.

“I suppose that Old Man Trump knows just how much racial hate he stirred up in that blood-pot of human hearts,” wrote Woody, “when he drew that color line here at his Beach Haven family project. Beach Haven ain’t my home! No, I can’t pay this rent! My money’s down the drain and my soul is badly bent! Beach Haven is Trump’s Tower where no Black folks come to roam.”

The apple doesn’t fall far from the tree.

The book is filled with 90+ original hand-written and typed lyrics to such classic Guthrie compositions as “Oklahoma Hills,” “Deportee,” “The Ballad Of Harriet Tubman” and “All You Fascists.” Testimonials from artists as far-ranging as Rosanne Cash, Chuck D, Ani DeFranco and his son Arlo Guthrie paint a picture of a man who lived to write about what he saw no matter the consequences. His voluminous letters to friends and family (the most fascinating part of the book) are a window into his innermost thoughts.

In “Pretty Boy Floyd,” he wrote “…many a starving farmer, the same old story told, how the outlaw paid their mortgage and saved their little homes…’well, you say that I’m an outlaw, you say that I’m a thief, here’s a Christmas dinner for the families on relief.’ Yes, as through this world I’ve wandered, I’ve seen lots of funny men, some will rob you with a six-gun and some with a fountain pen. And as your life you travel, yes, as through your life you roam, you won’t never see an outlaw drive a family from their home.”