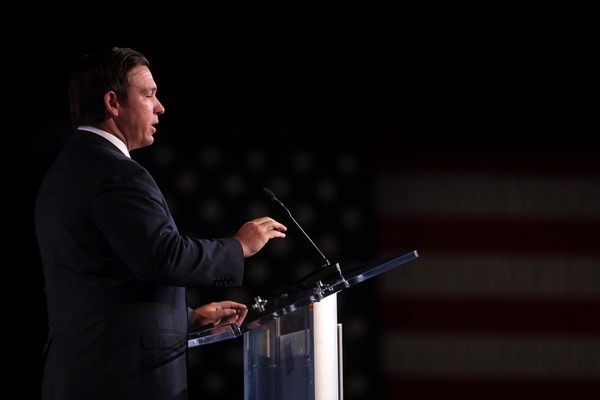 "Ron DeSantis" by Gage Skidmore is marked with CC BY-SA 2.0. To view the terms, visit https://creativecommons.org/licenses/by-sa/2.0/?ref=openverse

Reality Check: RON DESANTIS IS DEFINITELY NOT A CLOSET TRANSGENDER COMMUNIST MEMBER OF THE KKK INSPIRED BY ‘MEIN KEMPF’

Dismantling scurrilous rumors about the Florida governor one at a time.

It is better to cast your seed in the belly of a whore than spill it on the ground.

The rumors are not true. In fact, I am here to defuse the furor over claims that beleaguered Florida Governor, rising Republican star for the 2024 nomination for president, was born a woman, and his anti-LGBTQ laws to attack these children at a vulnerable age is a prime example of Freudian sex-identity self-loathing. This is madness and an obvious attempt by radicals to attack his origins and dilute his influence over a dying economic state and add to his plummeting approval ratings. There is also no truth to the allegations that his using the state government to pass laws as blatant attacks on business rights for political vengeance is a prime example of his communist leanings. Nor is this nonsense that his constant parading of the term “grooming” as a systemic mind-control of the state’s youth by the gay community is lifted directly from the third chapter of Adolf Hitler’s Mein Kempf, substituting Jews for Homosexuals. And just because the Republicans have voted to disenfranchise Black congressional districts to skew election results, does not cement DeSantis’s membership in the Klu Klux Klan. Come on. This craziness has to stop. Now.

I am no fan of DeSantis. He is a charlatan selling fear and the over-coddling of children for their inability to process information on their own without the help of the government. His banning of math books because it may upset white people is cancel culture run amok. Sure, he’s an opportunist who exploits whatever wind is blowing – anti-science, anti-gay, and whatever crap it takes to get elected. But who doesn’t? I get that. I have been at this a long time. I lived through Just Say No and Freedom Fries and Muslim Bans. I’m a big boy. I do not hate Ron DeSantis. Even though I think he is silly, his kind interests me – like studying the grazing habit of the dung beetle.

If anything, I pity DeSantis. He is clearly mentally challenged, and these attacks are just a cheap form of bullying. For instance, I am appalled at these memes and repeated video clips played over and over on YouTube of his drooling. This is absolutely not a sign of stroking. Are these people doctors? No. Do they care that his administrative assistants are forced to calm his late afternoon crying jags or deflect these tall tales of his manic jacking off to Donald Trump sweating through interviews? They do not. Instead, they just take to the Internet to hammer on him. Where is the compassion? Maybe it is this low-rent treatment that has led him to act as a psycho bigot. Has The Grinch Who Stole Christmas, or pretty much any Dr. Seuss (his canon does tend to drive a singular concept home), taught us nothing?

I do not have to agree with someone’s politics to defend their character against mean-spirited political mudslinging. I support LGBT rights. I do not want to see any state, even a sinkhole like Florida, either run by Democrats or Republicans, disenfranchise African Americans to better the chances of electoral victory. Having read Mein Kampf and found eerie similarities between most religious-based governing and its dangerous baby, patriotism disguised as state-mandated mugging, I can state with confidence that it is a stretch to take out one or two sentences in a deplorable document to prove DeSantis is a Nazi.

Enough with the Nazi comparisons. As if that is ever going to happen again. Great defenders of freedom like Vladimir Putin are putting an end to fascism in Ukraine right now. We are all safer for it. He is a great hero. At least that’s what Trump and Fox News says, and why divert any belief system beyond what a game show host and a tainted news organization have to say? There is no time for that.

Or maybe Putin is a despot? Hard to tell. I’ll have to do my own research and investigation once I am done deconstructing the quasi-science of the COVID virus. I heard a good place to start is Season 26 of The Bachelor.

Can I just break the fourth wall for a moment? I just wrote that there are 26 seasons of something called The Bachelor, wherein strangers find spouses for life on a reality TV show. That is a thing that is true. It has happened and keeps happening. The National Broadcasting Company would not put this on if it didn’t make a shit-ton of money and get big ratings. A quarter century of The Bachelor. Let that sink in.

Okay, back to the satire.

While it is true that DeSantis and his Republican-controlled government is pissing on Ronald Reagan’s grave by stripping the legal right for the Disney Corporation to control land it has built on its own with its own funds, maintain its debt, infrastructure, and other amenities, freeing tax-payers and the local government of the fiduciary burden, he is doing so in the defense of the right of parents against the company’s evil anti-DeSantis ideologies. The state manipulation of a private business concern is not communism. The state using its powers for personal gain and vengeance for a business not supporting its ideology is not communism. It is hardly communism for the taxpayers to absorb the business expenses of private enterprises, thus making it state run. This is like saying that a president not agreeing to the results of an election, trying to use the awesome powers of his office to remain in charge, and then commandeering an insurrection on the federal Capitol building is fascist. Absurd.

Finally, the most outlandish of any of these fast-moving rumors is that Ron DeSantis has had sex realignment, that he was born a woman, and he is using this crusade against the LGBTQ community and (gulp!) LGBTQ children as a front to deflect the truth. This one is easy to refute. Firstly, no respectable Trans would ever dress like him. Have you seen his suits? It’s like a 1970s Caldor blew up and landed on his back. His gait is also far-too simian to have any female origins. And while I support his right to self-identity as sacrosanct and defend his personal choices to not be defined as a threat by the government, it is beyond believable that this man has ever been anywhere near women, much less was once one.

Okay, so maybe this Roy Cohn-esque boondoggle does come with photos of the former Ronnie Dee-Lite dancing at Birds of a Feather Lesbian Lounge in Miami, Florida in 2001. And, admittedly, there are intriguing resemblances to what some – not me – might judge as pre-surgery female DeSantis. But come on. I might be led to believe Marjorie Taylor Green was a man or that Lindsay Graham was thrice the grand marshal of the Mermaid Parade, but DeSantis as a woman just doesn’t wash.

In conclusion, despite actions leaning in this direction, Ron DeSantis is not a self-loathing transgender, nor is he a devout communist, influenced in any way by the writings of Adolf Hitler, nor a member of the KKK – at least not a card-carrying one. But I will be doing further research on this. The Green Bay Packers QB is helping me out.

Considering how gullibly fickle our electorate is, and his preternatural ability to tap into the whiny zeitgeist, Ron DeSantis is probably going to be our next president.

So, come on. Leave him alone.