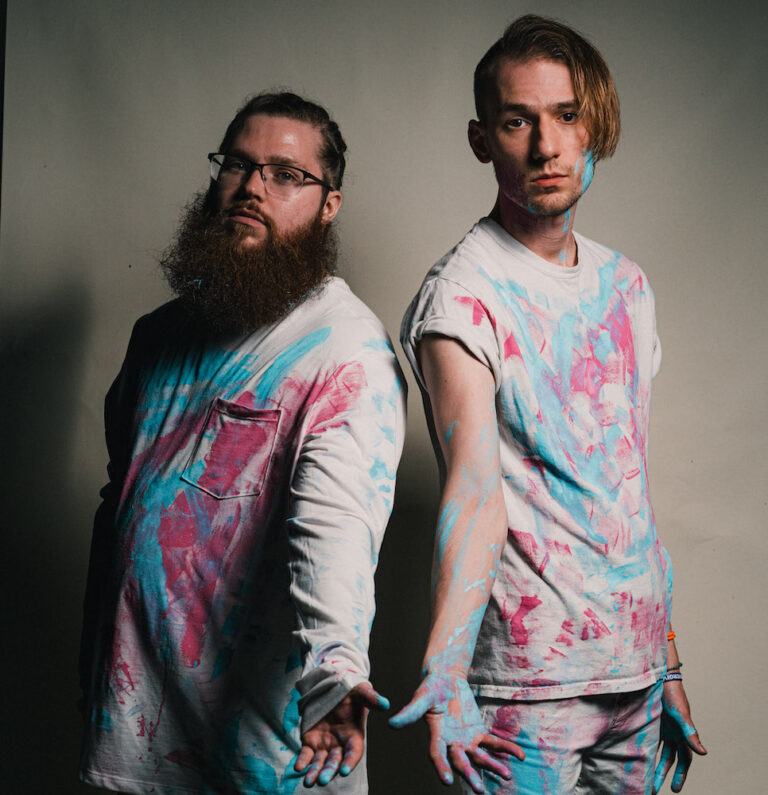 In 48 hours, Something Right In Between is yours. For now, here is a track-by-track look at the record, exclusively for The Aquarian from Highwind.

Chris Russo, frontman for the Jersey duo Highwind, is all about building songs with texture and taste in mind. With drummer Dan Smith, the pair critically examine hook-laden music and radio ready rock with what they are creating. There are more elements to name when it comes to these two and the career of theirs that is taking shape, but memorable melodies and unabashed pop musicality are forever going to be at the forefront of conversations about Highwind.

The Garden State natives are releasing their debut full-length on May 6. Titled Something Right In Between, it’s sure to stir you up, get you moving, and show you that if you take an emotionally-charged eighties rock band and throw it in a blender with a catchy pop punk artist from the early 2000s, you’ll get a musical partnership that is in the same tuneful vein as twenty one pilots (while still being far removed from the “Chlorine” hitmakers). Before you get to delve into it sonically and all for yourself, we reached out to the group for some thoughts and stories behind each song making up this brand new, highly-anticipated, colorful, and fun pop rock album.

“‘Sugar’ is as candy-coated pop of a song as you can get. Literally. ‘Sugar’ is a song about comparing going through a breakup, realizing that you are worth more than the negative treatment you are given, and comparing that to candy and the, ‘sweeter,’ things in life. ‘Sugar’ is the song that really inspired us to take a poppier, dancier approach to our song-writing, and was the first step of the Highwind era that is unfolding before everyone’s eyes. Having been inspired by a lot of indie-pop and pop-rock artists, taking our songwriting in this new direction felt natural.”

“‘Hung Up (Feat. L St. Germain)‘ is about the burning desire to be with someone you can not have. The love, lust, and attraction of someone that you can not get over. They make you think about yourself differently. They make you question your thoughts and feelings. But when all is said and done, the only thing you have is those feelings that can’t be reciprocated. Musically, this song is heavily inspired by neon pop bands like All-American Rejects, Forever The Sickest Kids, The Ready Set, and whatever pop-rock bands were popular in the mid-2000s. A nice touch of modern pop is also thrown in there for texture and taste.”

“‘Fine For You’ was written during a time where I wasn’t sure of what to do next. It was written out of anxiousness from not feeling like I’m working hard enough, and wanting to feel like I’m good enough. This song also marks a huge pivot in sound for Highwind. This song, both lyrically and sonically, is a big change in the direction of Highwind. As the first single off of the album, I couldn’t think of a better song to showcase the beginning of this chapter of this project.”

“‘Search Without Sight’ is the companion track to ‘Fine For You.’ ‘Fine For You’ is about the WANT to be good enough, Search Without Sight asks the question of, ‘WILL I ever be good enough for someone?’ Having been written in the spur of the moment, Search was the last track to be added to the album, and easily the most raw track. It’s the best way that we could have wrapped up side A of Something Right in Between.”

“‘Will You Please (Stay)’ is a return to positivity. This song is meant to serve as a reminder to the listener that everything will be okay at the end of the day. Having been a single prior to the release of the album, it felt right to include this song in the mix of tracks that make up Something Right in Between. The song carries a message of hope, and is packed with energy that consistently rises as the song plays out. A perfect way to begin side B.”

“‘All’s End‘ is a song about life moving faster than you can handle. Life moves fast, [so] we compared the journey to speeding cars, being drowned out by a crowd, and a ticking clock. Not knowing where we ended up or how we got there, but being ready to play with the cards that we were dealt. This song is massively inspired by modern day indie-rock and synth-pop, and is a great showcase for where our heads were at when going into the songwriting process for the record.”

“‘Jaded (Feat. Charlie Mahoney)‘ is a song about the realism and stress of life. Paying rent, needing that cup of coffee to get you through the day, and accepting the fact that you will have your days where you fall down. I (Chris) wrote the song over video call with Charlie Mahoney from the band Flight Club in the midst of the pandemic. The songwriting happened very organically between the two of us, and is a very therapeutic track for the both of us.”

“‘Harmony’ is the last track on Something Right in Between, and is simply about love. ‘Harmony’ is about wanting to find love, wanting to find someone to walk with through the rollercoaster of life. After covering so many ideas, thoughts, and emotions throughout the record, ‘Harmony’ brings the album to a soft, somber close. While this song is the biggest departure of sound for us, it leaves the door open for whatever we want to do when the next album comes around.”

SOMETHING RIGHT IN BETWEEN IS OUT FRIDAY, MAY 6, WHEREVER YOU LISTEN TO MUSIC! KEEP UP WITH HIGHWIND HERE!