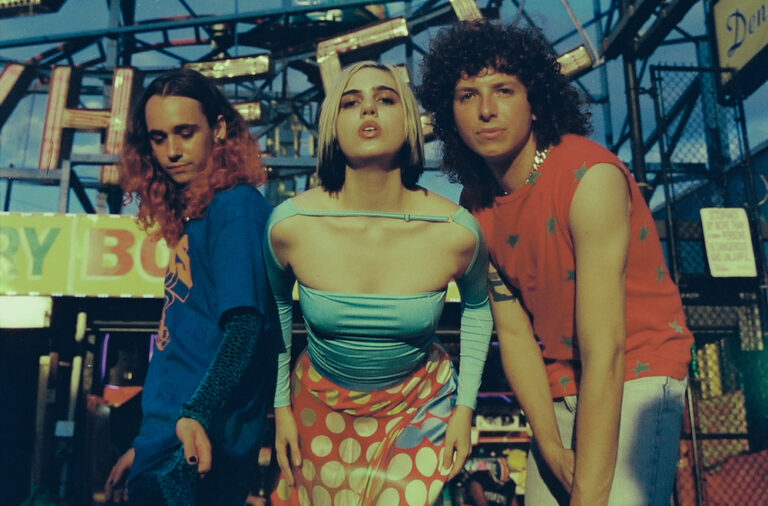 Sunflower Bean on ‘Headful of Sugar’ and Headlining Webster Hall

Next week has a lot to look forward to, such as The Black Keys’ new album Dropout Boogie (May 13) and Twilight Zone Day (May 11), but nothing is more exciting thank knowing a riveting, borderline psychedelic, high energy rock show is coming to NYC (May 12) just days after an album release (May 6).

Despite their grungy past, New York City’s rock trio Sunflower Bean are placing all their energy in a Headful of Sugar, the band’s third full-length album – one that is gearing up to be a pop rock classic. Since their 2016 debut with Human Ceremony, the rock outfit has been experimenting with all types of punchy, experimental sounds that have illustrated growth throughout each album.

The songs “Who Put You Up To This?,” “Baby Don’t Cry”, “Roll The Dice,” and “I Don’t Have Control Sometimes” were released already, representing such an incredible smorgasbord of edgy sounds. “It has a feeling of a mixtape,” Cumming adds. “It has a lot of songs that meant to hit different parts of your taste. My dream is that the rock fan will find to love the poppier elements of the album and the pop fan finds the heavier rock side to it. I hope there is a taste of cross pollination to it. This record is meant to live in the now.”

Sunflower Bean’s songwriting and recording process saw a crest for a first time during the Sugar sessions. They found themselves at their most relaxed and creative at the time. “For the first time ever, we had a lot of time to write and record due to the pandemic. There was a lot less pressure to record the album because it felt like the record wouldn’t come out,” states Kivlen. “Working from a place from instinct and having fun and letting things naturally flow is liberating. There really isn’t much of a formula when it comes down to songwriting. Sometimes Julia writes an entire song and then we work it all out together. Sometimes it’s a collaborative lyric process and we work on each line together in one song.”

Next up, the band is ready to headline the coveted mainstage of Webster Hall, but the sudden onslaught of fame hasn’t hit them yet. “I was in high school when the first album came out. It’s been brick by brick. We sort of operate like a family business,” the singer tells us.

“Our lives are so normal, and it’s been so gradual. I’d be happy to play a house show now too,” admits Kivlen on the band’s success thus far.

At the end of our interview the band did declare that rock music still has a chance. “I think we are gonna make a heavier album than Turnstile. It’s the upper echelon of music coming from Machine Gun Kelly and Yungblud that will trickle down. The rock scene has been soft for bit now, but now that the pandemic is over, I think people will want to rock again,” concludes Kivlen.

THE NEW SUNFLOWER BEAN LP IS OUT ON FRIDAY WHEREVER YOU LISTEN TO MUSIC! FOR MORE INFORMATION ON THE BAND, INCLUDING HOW TO GET TICKETS TO THEIR WEBSTER HALL CONCERT, VISIT THEIR WEBSITE!