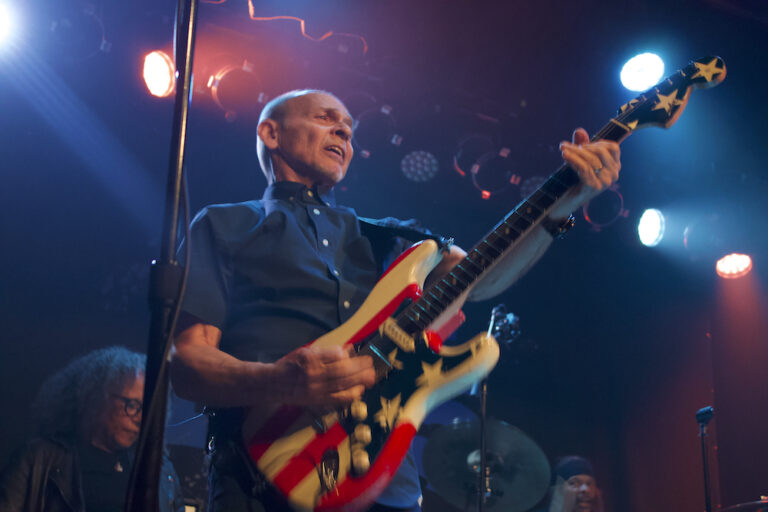 The MC5 rolled through Warsaw on May 8 with support from Brooklyn’s own Shilpa Ray and melted our faces.

In the opening track of the MC5’s debut live album, they are introduced as a ‘testimonial.’ Those in the audience must choose their life’s purpose – Are they part of the problem or the solution? – and testify it here and now. And then, the infamous “Kick out the Jams” follows, making rock and roll history.

Since 1964, Brother Wayne Kramer has been the guitarist for the Motor City 5. Though they did not sound like the Motown coming out of Detroit, the MC5 left a mark on music history with their nightly high-energy performances and leftist zero-tolerance-for-bullshit that launched them to fame (or notoriety, depending on who you ask.) Although vocalist Rob Tyner, guitarist Fred ‘Sonic’ Smith, bassist Michael Davis, and drummer Dennis Thompson all passed on, the spirit of the MC5 is alive in Brother Wayne.

The latest incarnation of the MC5 is a star-studded lineup: Brad Brooks from Pollo Elastico on vocals, Stephen Perkins from Jane’s Addiction on drums, Vicki Randle (who played with Mavis Staples) on bass, and guitarist Stevie Salas, a David Bowie band alum.

As people were milling about and filing in, DJ Mick Collins from Detroit provided a stellar blend of tunes; garage rock, psychedelic, Motown, blues, soul, and more. Funkadelic, The Clash, The Meters, John Lee Hooker, Curtis Mayfield leading the Impressions. A delightful blend of songs, both known and obscure. He also filled the gaps in between sets. I’m sure I’m not alone in appreciation for his methodical soundtrack.

Shilpa Ray then took to the stage around 8:35 p.m. The quartet, who we previously saw open for July Talk less than a month ago, consisted of her bassist, guitarist, and drummer. The band is riding high off recently releasing their album Portrait of a Lady, where Shilpa smiles her best Billie Holiday smile. Their music is genre-bending: punk, soul, artrock. I previously wrote that Shilpa as frontwoman channels Poly Styrene, and I reaffirm that. Though their set was only 45 minutes, the crowd was bewitched by the trance she put us under.

After a rather quick changeover, The MC5 then took the stage with Wayne coming to the center microphone for “Ramblin’ Rose.” His American flag guitar has been a prominent statement from before the days of Abbie Hoffman clad in red, white, and blue. Brad wore a red suede jacket and sunglasses, looking cool, and let Brother Wayne take the spotlight for their first song. Wayne then shifted to his spot stageright for “Come Together,” a punny innuendo. “Baby Won’t Ya” and “Motor City is Burning” followed suit with all five members in tune and ripping. Before “Poison,” Kramer introduced the band, and when he came to Stevie Salas, made an apparent note of his Apache heritage.

Make no mistake, Wayne Kramer may be 74 in age, but in energy and ability, he is 40 years younger. He jumps, windmills his guitar, and has more energy than some new acts. He looks incredible. As one of the progenitors of punk and metal, the MC5 were heavy with distortion created from high volume. Introducing a new song named “Heavy Lifting,” Kramer cracked a few jokes: “Most bands take six months between. Maybe two years. We took 50; we’re extremists.” The current lineup of Randle, Salas, Perkins, Brooks, and Kramer will release the MC5’s first new studio album since 1972, so that’s exciting!

With building bass and cyclical grooves, Brooks said to the crowd, “The time has come. It’s time to…” The crowd knew what time it was. Randle and Perkins were locked in a groove, Stevie made a quirky face, and Wayne smiled at the crowd. “It’s time to… KICK OUT THE JAMS MOTHERFUCKER!” One of the first cases of censorship launched them into counterculture cult fame. They intended ‘jam’ to mean tunes, which they have plenty, but ‘jam; taken on new meanings over the decades. ‘Jams’ could be interpreted metaphorically as the restrictions of progress; the things jamming up Congressional Halls and public discourse.

Surprisingly, “Kick out the Jams” was not their last song; “Rocket Reducer No. 62 (Rama Lama Fa Fa Fa)” followed, then a sermon by Brother Wayne Kramer.

“We live in a dangerous time,” he said. “Seriously. These Republicans, the religious right, and the Trump-istas are not joking about taking democracy away.” Cheers from the crowd. “They are serious. And if the MC5 means anything, it means taking action.” More applause. “I want you to get out, I want you to work for positive change. Show these fools they cannot take our democracy away from us. We gotta fight, we gotta vote, we gotta work like we’ve never worked before to save this city, to save this country, and to save the planet.” (Cue the uproarious applause.)

When Brother Wayne Kramer speaks, you listen. When he plays, you witness. Following Kramer’s speech, “Looking at You” followed before the three song encore of “Let me Try,” “The American Ruse,” and “Sister Anne.” It is such a shame the MC5 is not a household name. To us punks, they are the basis. To us audiophiles, they are fascinating to hear their innovation. Kramer’s scrambling, dissonant, loud guitar is the stuff of legend. And to behold it, long after their time at the frontline of the volatile hippie movement, or the riot at the Democratic National Convention of ‘68, is something I won’t soon forget.

FOR TICKETS AND INFO ON HOW YOU CAN CATCH THE MC5 LIVE, VISIT THEIR WEBSITE!