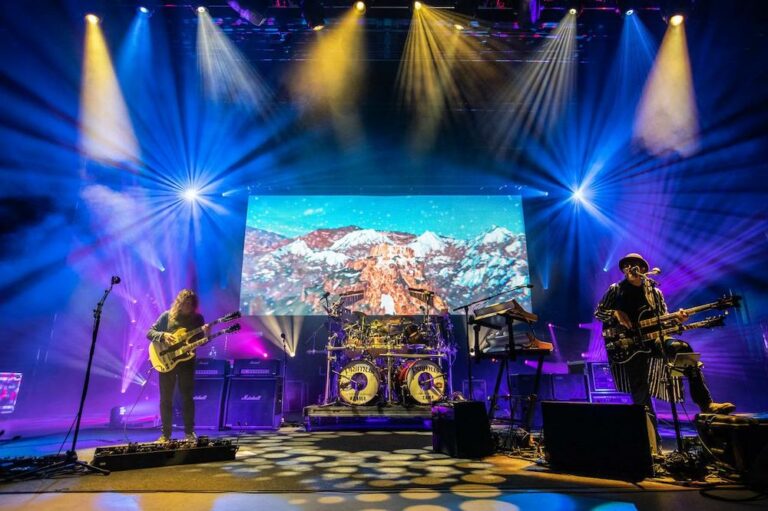 A slick NorCal band with an open-minded SoCal sound, Primus took metal by its horns and made it fun again with rhythm, funk, and groove that few could emulate, but many could love. (There’s a reason they have embarked on 30-something tours… and have the guts to cover Rush.)

It’s impossible to pin Primus to a specific genre in the rock milieu, and that’s a good thing. The eccentric San Francisco Bay Area trio is truly unique, having produced unconventional, experimental music for nearly 40 years. Les Claypool’s amazing, at times funk, at times avant-garde bass playing, guitarist Larry “Ler” LaLonde’s unpredictable note and chord structures, and Tim Alexander’s wild yet solid drumming make for an extraordinary listening experience. Through the course of their career, which includes nine studio albums, Primus has amassed a rabid fan base. Now, the band has turned its attention to Rush. Primus is on its “A Tribute to Kings Tour,” playing the legendary Canadian trio’s 1977 prog masterpiece, A Farewell to Kings, in its entirety.

The tour, which also features the band performing music from its new EP, Conspiranoid, and fan favorites, comes right to our neighborhood on May 21 at the Wellmont Theater in Montclair. We recently had the pleasure of talking with affable six-stringer Larry “Ler” LaLonde.

How does it feel to get back onstage again after doing one leg of the A Farwell to Kings Tour in 2019 and then having it postponed for two years?

It feels great, always feels great to tour. In 2019 it was a whole undertaking to put the show together, the songs, the stage set, the lighting, the rehearsing. I took time to let my brain absorb everything. Then the pandemic hit and I unabsorbed everything. I’m actually redusting off the cobwebs on the songs now. You start to forget some of it but it’s also kind of like riding a bike again, it all comes back

Why a Rush tribute and why did you choose A Farewell to Kings?

There was a period of time when we’d done a lot of touring and played everywhere and when we came back we weren’t going to make a record right away. So we had a window of time and wanted to do something but not a new record. We thought about wanting to cover something and then we started thinking Rush. It came down to A Farewell to Kings or Hemispheres. We batted them back and forth and settled on A Farewell to Kings.  You have to play “Cygnus X-1” before “Cygnus Book II.” It’s crazy that when it started off the idea was to do this little, small thing for fun. Now it’s a big tour. As soon as we announced it the fans were excited about it and then everybody else in the business that makes these things happen got excited about it and it got extended quite a bit, which is cool. I love playing these songs.

When were you first exposed to Rush and A Farewell to Kings?

My first concert was Rush. I went with my older brother. I was 12 and I didn’t even know what a concert was. I didn’t know Rush or anything about a concert. It was at the Oakland Arena and there were lights and smoke and crazy people everywhere and this whole scene was nuts. It was a whole spectacle. It was the Moving Pictures [era] so I was lucky to get to see that tour. The funny thing was the next weekend was Van Halen and I didn’t know them either. After seeing them I wanted to get a guitar and be in a band. I didn’t know very many bands. With Rush, I learned about instrumentation, lyrics, and even album artwork. The funny thing is, A Farewell to Kings was the one I listened to the least. That and a couple earlier ones I didn’t have. I only knew the stage versions of those songs from the live albums.

What are your favorite songs to play live from the album? Which are the most difficult?

“Xanadu” is always amazing and the answer to both questions. As difficult as these songs are they’re fun to play. “Xanadu” is most definitely the most difficult. There’s keyboards you’re playing with your feet, several guitars you’ve got to switch between within the song. The thing about Rush songs is they’re not jammy. If you don’t do them right the song is quickly lost.

Primus is a very experimental band while Rush sticks to studio versions of songs when performing live? How does Primus interpret Rush songs onstage?

For the most part we try to just stick right to what the record is. Our assumptions are that nobody really wants to hear someone else’s take on a Rush song. It’s weird in general playing cover songs but I think hearing a band playing it loud and live is great. I think with “Xanadu,” for example, since I’ve heard the “Exit Stage Left” live album version so many times that I gravitate toward that version more.

What do your bandmates bring to their roles as Geddy Lee and Neil Peart respectively?

The thing that blows me away is that the guitar is hard enough. I can’t even imagine playing the bass and drums parts for these shows and on top of that trying to play the bass parts and sing. I’m pretty impressed every night by both of those guys playing this stuff.

Your new EP, Conspiranoid, Primus’ first set of new songs in five years, was released on April 22. What led the band to producing new music at this time?

Les has a new studio set up and we were rehearsing up there for this tour and we had this idea of, “Oh, we should do a new song for the tour,” so we went in and started recording and recorded this 12-minute song (“Conspiranoia”). We finished that one, put it all together, and were pretty excited about it. Then while I was driving back home to Los Angeles I got a call that, “Hey, we should do some more songs,” so I drove pack up and we did two more songs (“Follow the Fool” and “Erin on the Side of Caution”). That’s what the EP turned out to be.

You know, that’s wild and kind of scary. It’s kind of been overwhelming the last couple years how much crazy stuff is thrown out at you and then how you’re expected to not see it as how crazy it is. There are people who seem to not be crazy kind of rolling with it. I’m sure there a million different motivators and factors as far as votes or clicks or getting paid. I just think there’s a lot of things going on with it, and it’s pretty crazy.

Les’ bass playing is very unconventional. Do you find it difficult to write your guitar parts around his music?

It’s like a fun puzzle at times because you do find ways to fit in or ways to complement it and restart with it. It’s not in a key you would see in a regular music. You’ve got to find out the roadmap to what’s going to be the key in the thing. It’s definitely hard to find two people let alone three that are into the same sort of weird music and willing to not worry about expectations and convention when putting music out.

It’s a lot easier when you have people of the same mind frame, so you just go for crazy. The greatest thing is it’s Primus so I can do whatever I want. The creative boundaries are pretty wide. We love it. It’s definitely some kind of thing that if you were putting together a band to be famous you’d never go this route.

You started playing guitar at age 12 and took lessons from Joe Satriani. How would you describe that experience?

I can’t even imagine the amount of information I got from that guy. It’s incredible. I don’t know how I lucked out that much. At the time in the Bay Area, everyone that I knew around my age had their local guitar teacher, and it turns out everyone’s local guitar teacher was taking lessons from this guy Joe Satriani, so he was kind of this mythical guy already around town. The guy who was supposed to be better than Eddie Van Halen, which at the time was blasphemy. One day I had gone into this music store because they had a used Marshall cabinet which somehow I saved enough money to buy. I went in and they had the guitar lesson advertisements where you pull the strip of paper off with the phone number at the bottom. It turned out to be Joe and I signed up. He was an amazing guitar player and an amazing teacher. Just to be able to sit in a small room and see somebody who can play at that level was mind blowing. I’d recommend it if you can do it.

You started out as a professional early, recording an album with the death metal band Possessed that came out when you were 17. What went through teenage Larry LaLonde’s mind when making your first record?

I think I was 15 when we recorded it! The good thing about that, when you’re that age, is you don’t know anything so you go for craziness. Stuff like death metal, there wasn’t really anything out there so we kind of felt like we were pioneering something to some extent. Slayer had just come out so obviously we were taking a lot of cues from them and Metallica was starting to bust out. So there was some heavy music around but with us with the satanic stuff it was funny because we got to push people’s buttons. We didn’t know anything about the satanic thing, what any of it meant, other than it pushed people’s buttons. We just knew that people got mad about it, so [that was] great.

How did you progress from death metal to Primus?

When you’re that age you’re switching musical directions a lot. Possessed was only two or three years and by that time death metal was going in a direction that wasn’t that positive, that was dark in terms of the satanic stuff. I had gotten into King Crimson and the Grateful Dead and all these other things and I wanted to do something a little more like that.

Now that the EP is out, is Primus planning a full album anytime in the near future?

In typical Primus fashion we never really plan too far ahead so we don’t have any plans for that. I’m sure we would’ve turned this one into an album if we didn’t have so much going on. Everyone’s pretty busy. I would hope so at some point. Everyone seems to be excited about playing, so I would hope so, but nothing is in the works.

FOR TICKETS TO SEE PRIMUS AT THE WELLMONT THEATER, THE PARAMOUNT, AND THE CAPITAL THEATRE, CLICK HERE!