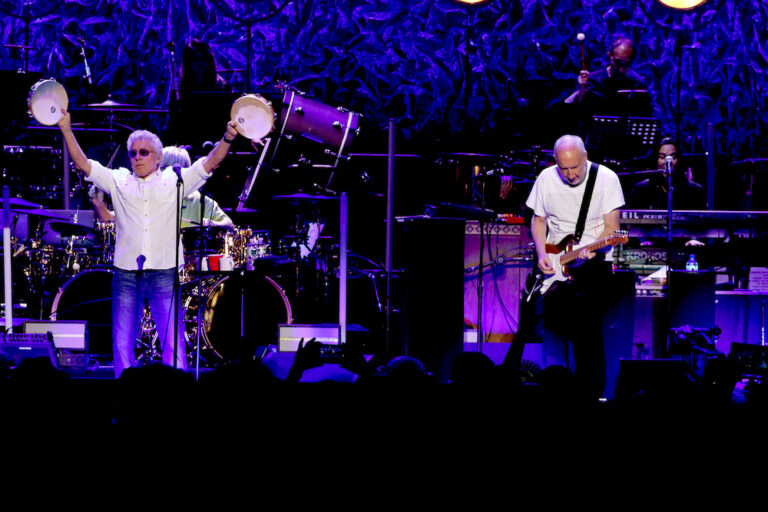 Rock bands and orchestras seldom meet on the same stage – unless you are the Who. The British rock band started as a quartet in 1964 and began working with orchestrated arrangements periodically following the success of the Tommy rock opera in 1969. In recent years, however, a full orchestra has been an integral part of every Who tour, and even on solo dates by the band’s two surviving founders, vocalist Roger Daltrey and guitarist Pete Townshend.

This symphonic turn is ironic, since the Who’s original premise was to be an explosive blues rock quartet. What made the Who so unique in its earliest days was that each of the four musicians played as if their instrument was the lead. Daltrey was the lead vocalist, Townshend played lead guitar, the late John Entwhistle played lead bass and the late Keith Moon played lead drums. Curiously, the 21st century version features predominance by symphony instrumentalists, many hired to read from charts for the night.

At Madison Square Garden, the “The Who Hits Back!” concert was bound by these charts. Wiggle room and spontaneous jams were not possible when dozens of musicians on stage came prepared to read charted music. These specific arrangements raised a legitimate question: were the extra musicians accompanying the rock band or was the rock band accompanying the orchestra?

Daltrey was in fine voice, although not nearly as spectacular as he performed in the earlier decades. Townshend’s riotous guitar playing was thrilling when it was not smothered by the volume of the orchestra. Oddly, perhaps the most impressive performance came from Starkey, son of the Beatles’ Ringo Starr; Starkey’s clever drum fills were mesmerizing and powered most of the drive of the concert.

Starkey’s stunning percussion throughout the concert raised another question. Since the band featured such an amazing drummer, why did the Who have three additional percussionists in the orchestra? Did the concert genuinely benefit from tympanis, for instance, on all but five songs?

The audience grooved on hearing the classic songs performed live. The Who performed mini-sets from Tommy and Quadrophenia. The band largely dwelled in its 1970s catalog, but also played “Ball and Chain” from its 12th and most recent studio album, 2019’s Who.

The Who closed the concert with flashy crowd pleasers. “Love, Reign O’re Me” was accompanied not only by rousing orchestral crescendos, but also with projected video clips of dark history, including the September 11th terrorist attack and the violence in Ukraine. For the finale, “Baba O’Riley,” Jacoby moved center stage to dance with gypsy flair alongside Daltrey and the Townshends as she played an extended lead on her violin.

In general, however, having nearly 60 musicians play the majority of the concert was excessive and detracted from the evening’s fullest rock potential. Indeed, the most engaging and riveting portion of the concert was the mid-section when the orchestra was on break. Will someone please tell Daltrey and Townshend that fans long for the Who to return to performing live as a four-piece powerhouse rock band?

The “The Who Hits Back!” tour is touring the United States in two legs, one in the spring and one in the fall. The Who will return to the New York City area with an October 7 concert at the UBS Arena in Elmont, Long Island. The performance will include an orchestra.