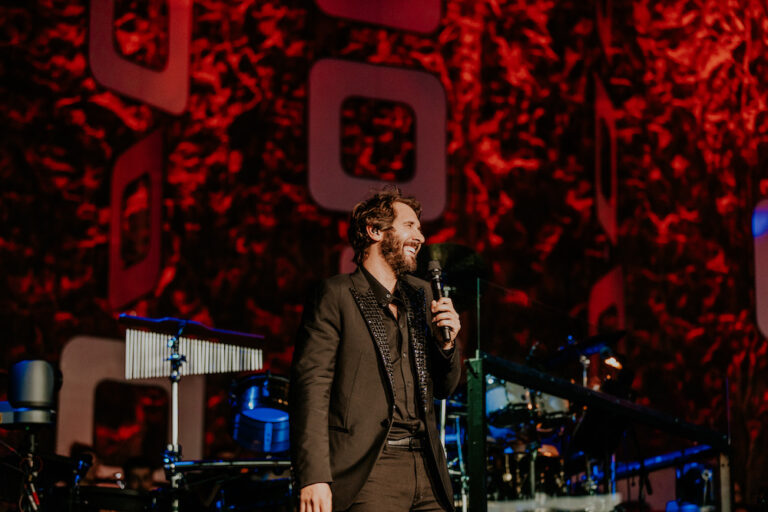 Josh Groban Writes His Own Rules

In a way, Josh Groban is a diamond in the rough. Sure, he’s a world-renowned and critically-acclaimed performer, but he has always been at the top of his game when in his own lane and, as the title says, he wrote his own rules to get there.

As part of his current Harmony Tour, acclaimed singer-songwriter Josh Groban will perform at Northwell Health at Jones Beach Theater in Wantagh, New York on July 8, then PNC Bank Arts Center in Holmdel, New Jersey on July 9. After the pandemic-induced hiatus, he couldn’t be more thrilled about performing in front of live audiences again.

“This is our first time being able to get out and play for fans after two years,” Groban says, calling from a tour stop in Cleveland. “I think that [live music] is something we all need so desperately, and I’m glad we’re finally able to get back to it. I missed my band. I missed my crew. I missed singing for actual human beings instead of singing in a livestream where you don’t hear applause at the end of it, which is kind of unnerving for singers!”

Groban promises that fans can expect a euphoric experience at these concerts, which is what he and his band are feeling, too. “I’m so happy when the house lights go down and it’s time to go out and celebrate that joy, celebrate that connectivity,” he says. “To not have had that has been really, really hard for everybody. For us, for the audience. Any little things, like a technical thing goes wrong or I miss a note on the piano, I’m not sweating that stuff – I’m really just excited to get out and jam with my friends and sing my face off for thousands of people that have been the most wonderful and supportive fans I could possibly hope to have.”

Groban also promises that these shows offer a bit of escapism. “We are all dealing with the dust still settling from everything that has happened, and everything that is still happening. I mean, the world is continually traumatic. To be watching the news and seeing everything that’s going on all the time, it feels like one bad day after another. And so music is a way that we can all give ourselves a little bit of respite from all the anxiety and fear.”

The setlist spans Groban’s entire career throughout the past two decades. “We chose a lot of material that represented, I think, the positive energy and the gratitude that we’re feeling right now, and the excitement that we’re feeling to get back out on the road,” he explains.

He is especially pleased to finally perform songs from Harmony, his ninth studio album, which was released in November 2020 (with a deluxe version following in February 2021). The album includes what Groban calls his “bucket list songs” and the twelve tracks on it (eighteen on the deluxe version) are songs that he has wanted to do for “as long as [he] has been in this business and songs that fans have requested in Instagram comments and tweets and things like that.”

One of those songs, “Both Sides Now,” was originally written by Joni Mitchell for her 1969 album Clouds, but it still seems relevant today. “It’s a song about perspective after having gone through life and having wisdom through a lot of different experiences,” Groban says. That message makes this songs one of his favorites to perform during this tour. “To sing that in front of a lot of people who are going through the same thing is a really powerful thing.”

Although Groban originally envisioned Harmony as purely an album covering other artists’ material, in the end he also included two tracks that he wrote, “The Fullest” and “Your Face.” These were, he admits, “Happy accidents. Sometimes the inspiration, the music, comes to you when you least expect it. I would get up every morning and sit at the piano, and I would write for me – I wasn’t writing for anybody else or for an album – and those songs just kind of came out.”

Writing material as the pandemic raged was a healing thing, the multi-talented performer tells us. “Sometimes you write songs about how you feel – and sometimes you write songs about how you want to feel, and you’re hoping that by playing it you’re manifesting the positive energy you want to see. Because I know I can go into a dark hole if I don’t let all that stuff out through singing and writing. It’s my greatest therapy. So I wrote ‘The Fullest’ about wanting to make sure that I collect memories, that I collect moments that are important to me, so that when it comes to the time when you look back on your life, you say that you did everything the right way. So it’s a song about celebrating all of the most important, simple things in life.”

One of the things that Groban certainly will be able to say when he looks back on his life is that he succeeded on his own terms. “When I started, I didn’t fit any trends. I wasn’t on the radio. I wasn’t on MTV. I wasn’t getting invited to all of the chichi parties. I was just doing my own thing and selling a boatload of records and singing to all these people who were interested in the sound of my voice and the music that I was making, but it was like we were existing in our own universe. So I was able to take advantage of all the ways I was being ignored, to say, ‘We’re creating something that’s special, but also no expectations from outside fly-by-night fads.’ It allowed me to write my own rules.”

The singer-songwriter gives credit to celebrated producer David Foster for helping him learn how to approach his career. Groban was still in high school in Los Angeles when a vocal coach introduced him to Foster, who took him under his wing. But, as Groban recalls, it wasn’t easy. “I was an introverted, shy kid. I was the kid in the corner reading. I did not want to be in the spotlight. I wanted to do theater. When I was doing theater, I could escape into a role. But as just me, as Josh Groban? It took a lot of pushing and prodding for David to get me to find that confidence that he had in me.”

Foster finally got through to Groban by pointing out that there was really no pressure on them, so they could do as they pleased. “He said, ‘Look, nobody’s paying attention. Nobody’s waiting for this debut album, so all we have to do is sing from the heart, write from the heart, play stuff that makes us feel good,’” Groban recalls. “So we didn’t put ourselves in any pigeonholes to say, ‘Well it has to be this.’ We just kept sprinkling influences into the music that felt right.”

Groban says he still feels like an outsider – in a good way – to this day. “Honestly, I haven’t really felt like I’ve been a natural fit in any of the genres. And that’s ok… it just means that I can take all of the rock and pop influences that I’ve had in my life and I can include them in more of the traditional orchestral influences I’ve had.”

Following his own eclectic path has worked out well for Groban: to date, he’s released several multiplatinum-selling albums, becoming one of the top-selling artists of the past 20 years. Besides his music, he has also enjoyed a successful acting career, winning roles across film, television, and theater.

For now, though, Groban is firmly focused on this tour, where he is mainly performing at outdoor venues (including the ones in Wantagh and Holmdel). “We were thinking to ourselves, ‘[Pandemic-related] regulations are going to start to get lax or non-existent,’ so we wanted to make sure that for our safety, for the audience, that we had some really nice fresh air,” he says. “And I also think, after being cooped up, who wants go into a cramped indoor space? Let’s be under the stars.”

FOR TICKETS AND INFO ON JOSH GROBAN’S TOUR, INCLUDING HIS UPCOMING DATES IN NY AND NJ, CLICK HERE!