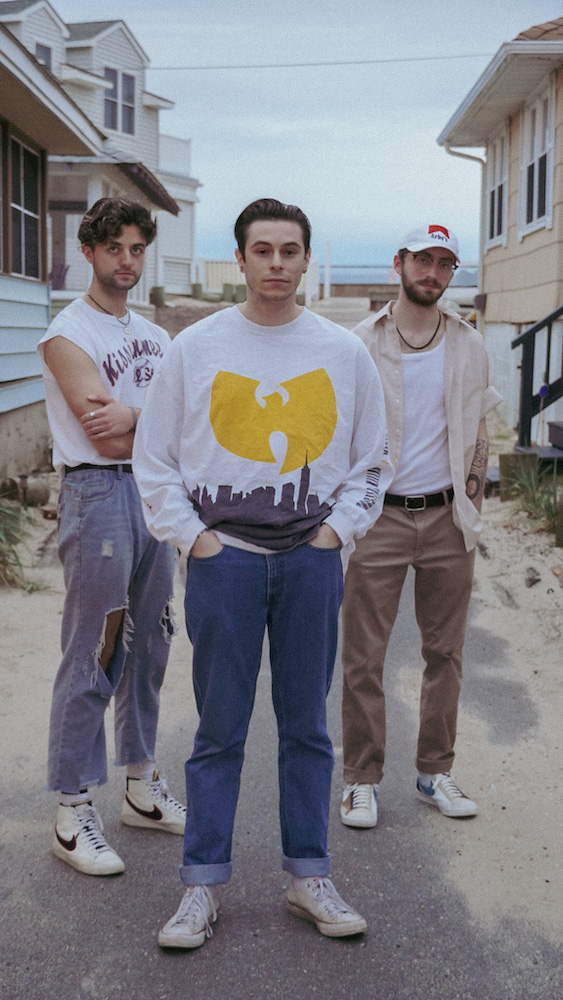 Malibu – In & Around Asbury Park

Lenses, the debut album from Long Branch’s own Malibu, is out now.

Malibu is synonymous with a few things: California beaches, that one Miley Cyrus song, Barbie dolls, the setting for Two and a Half Men. In New Jersey, when you hear “Malibu,” there is a good chance you think of the musical three-piece that has been cutting their teeth in and around the Garden State for years. The alternative rock outfit has almost a quarter million streams on Spotify alone, and that was without their debut record being out in the world (which it is now). For a trio whose grown from house shows to venue release parties, it’s no small feat and all worth celebrating. This new era, the Lenses era, is going full-speed ahead with members Ray Zando Laux, Scott Buksbaum, and Eric Schwartz working hard to keep that train moving forward. The Aquarian had a moment to catch up with them ahead of the Lenses drop and prior to the aforementioned release show, which is July 9 at House of Independents right here in Asbury Park.

Why is now, July 2022, the best time for you to be releasing a debut album? Does the record have an overarching summertime feeling to it? What led up to this release day?

The main reason being this was the soonest date we could release the album after finally finishing it. Luckily, it also works out where a few songs off the record (“Lose Your Mind” and “Never Ending May”) have a [definite] summer-y vibe to them.

Malibu has been a New Jersey staple, a DIY scene entity, for years. How has this community shaped you as a band and your music as a whole?

There are so many great artists in the local scene, it would be hard not to draw some inspiration from them. It’s nice to have so many artists to share the stage with, too.

Long Branch is the home base of Malibu. Asbury Park is the setting of your album release show. What in and around the Jersey Shore would you like to give credit to and shoutout in terms of getting you to where you are today: a band with an LP under its belt?

We wouldn’t have been able to do any of this without a staple of Asbury Park’s music scene, Telegraph Hill Records (Joe Pomarico). Joe picked us up in 2019 and has been working with us to produce and release the album since. We also have to shout out all the great venues on the shore that we’ve been able to play at for the past five years – especially the Brighton Bar. Shoutout Brighton Bar.

How has your process for writing and recording changed, if at all, since starting out as just friends who jammed and now as proper bandmates?

The past few years, we’ve started to pay more attention to the recording and production aspect of our music. We started out by just going into the studio and cranking out three to four songs in a day then leaving. For the album, we spent multiple hours – sometimes days – in the studio for each song and we think that it shows when you listen to our first songs versus our latest music.

What was the first song you got together for this album versus the most recent? Can you tell us a bit of backstory on each to share with our readers and your fans?

The first song written was the album opener, “Constant State.” Ray actually wrote this song when he was 16, before Malibu was even a band. We’ve made some other recordings of it in the past, but finally got the sound we envisioned on the record. Funny enough, the most recent song off the album is the finale and title track, “Lenses.” Eric wrote this one during the recording of the album and we decided we liked it enough to throw it on there… and even make it the title of the album.

We were grateful for the opportunity to dive into this 10-track record ahead of its mainstream, public release. For us, two standout songs were immediately and evidently “Never Ending May” and “Things Fall Apart.” Are there any numbers that are strong favorites or important tracks to you outside of the sonic aspect we hear?

Our collective favorite off the album is “Lenses.” We really like how that song came out and are looking to make that our signature sound moving forward. It’s also one of the harder-hitting songs off the album, emotionally-speaking. We think it works really well as a grand finale.

At House of Independents on July 9, what songs are you the most excited to play live for friends, family, and fans? Is there one that you are itching to bring to life on stage?

We’ve been playing a good amount of these songs for a while now, but haven’t played “Constant State” since our first ever show. The current form of it has such a different energy that we can’t wait to show everyone. It’s also cool to see how that song has come full circle in the span of five years.

FOR TICKETS TO THEIR ALBUM RELEASE SHOW AT HOUSE OF INDEPENDENTS, VISIT THIS LINK! KEEP UP WITH MALIBU BY FOLLOWING THEM ON INSTAGRAM!