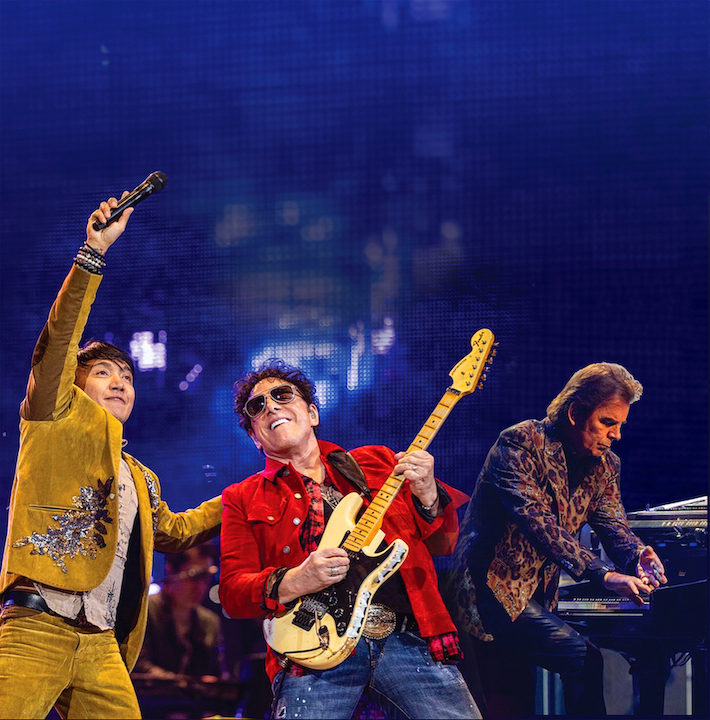 Journey – a band known for more hits than one can name on both of their hands – have yet to slow down. Eventually their generations of fans will have an easier time counting songs that weren’t hits than those that were, but who is really complaining?

By any measure, Journey are one of the most popular rock bands of all time. In the 1970s and 1980s, they put out hit singles that have since become rock anthems, beloved across generations: “Wheel in the Sky,” “Lights,” “Lovin’, Touchin’, Squeezin’,” “Any Way You Want It,” “Who’s Crying Now,” “Don’t Stop Believin’,” “Open Arms,” “Separate Ways (Worlds Apart),” “Faithfully,” “Send Her My Love,” “Be Good to Yourself,” and many more. Now, nearly 50 years since the band began, they continue to sell out arenas around the world – and today, July 8, they are releasing their 15th (!) studio album, Freedom (via BMG).

Journey’s fans have been loyal, but they’ve also had to be patient: Freedom comes 11 years after their last studio album, Eclipse. When asked how the band members knew it was finally the right time to release another album, Journey’s founder and guitarist Neal Schon affably exclaims, “Well, you know what? We had a lot of time to think about it!” Throughout a recent Zoom video call with The Aquarian, he remains upbeat, clearly energized to get new music out into the world.

“The last couple of years, when everybody was just kind of locked up during the pandemic, I turned to music and tried to get creative and started shooting things off to Jonathan [Cain, Journey’s keyboardist]. One thing led to another, and then all of the sudden I found myself in the studio.”

He is elated with the results: “I think it’s one of the best albums we’ve really ever done, and I think it holds up next to an Escape, a Frontiers,” he says, referencing Journey’s multiplatinum-selling albums from 1981 and 1983, respectively. “I think musically it’s very diverse. I think that we show signs of new life, a new chapter in Journey with heavier, funky, rocking stuff.”

Fans shouldn’t worry that the band has strayed too far from their distinctive sound, though. Schon promises that the album also includes “material that sounds very familiar, and the type of melodies that you would expect on a Journey record.”

The album’s 15 tracks exude a certain sense of optimism and Schon says this was by design. “I think it’s always been something with Journey: we always write about love and hope and the better side of life that is there for everybody, and not dwell on situations or politics or things that make you think too much about what’s going on,” he explains. “Yeah, I mean, everybody’s got a lot of that every day – the news is heavy now. But I think music is meant to take people out of that funk and help them escape real life and go into their own world where they’d like to be for a second.”

Schon certainly has the track record to prove that he knows what Journey listeners want: next year will mark the 50th anniversary since he founded the band. It is, he says, “kind of crazy that we’re still together and we’re creating. We’re getting, I think, better reviews from our actual fans than we’ve ever gotten in any of the years I can even recall.”

He takes a lot of pride in what Journey have accomplished because “In a sense, it’s like my baby because I started it with Herbie Herbert, our original manager, who’s now in heaven – he passed this last year.” Herbert was working as a roadie for the band Santana when he met Schon, who was that band’s teenaged guitar prodigy.

After Schon departed Santana, seeking to do something where he could stretch out and explore all his influences – mixing “[Jimi] Hendrix and Cream and Jeff Beck and Jimmy Page… with the blues guitarists and jazz guys I was following back then,” he says – Herbie Herbert approached him with an offer that would change his life.

“Herbie Herbert decided he wanted to be a manager – this was in the middle of ’72 – “and he said, ‘Look, I want to wrap a band around your guitar playing.’ And I didn’t know what I wanted to do at that time. I was very young. So I said, ‘Sure, let’s go.’ That was kind of the beginning of everything.”

Given that he was a founder for Journey – and has remained the sole constant member since then – Schon takes his legacy with the band very seriously. “I feel responsible for where it ends up and how it ends up. I’ve had a lot to do with most every change that we’ve made, personnel-wise. The one change that was huge for us that Herbie made that I had nothing to do with was adding [vocalist] Steve Perry.” Although Schon confesses that he was initially unsure about this move, it ushered in a highly commercially successful period for the band. “[Herbert] turned out to be very correct, and opened up our audience to a much, much broader audience.”

With the band’s current vocalist, Arnel Pineda (who joined in 2007), Journey have continued to successfully release albums and tour. Schon says he’s grateful that the fans have remained loyal as the band evolved.

“Our audience now, we have five generations out there,” Schon says. “I mean, I’m seeing a new generation almost every time we play. It’s really wild. This last tour, I recall seeing some videos that some parents had put up of their kids in the audience. My first thought was, ‘Oh, they probably couldn’t get a babysitter, so they brought kids to the show – how cool.’ And then the camera’s on the kids and you see that they’re singing every lyric. It’s amazing. I think we continue to bring younger people in as the older albums continue to sell.”

To date, Journey are certified as one of the most successful rock acts of all time, with 80 million albums sold so far. They were inducted into the Rock and Roll Hall of Fame in 2017.

Neal Schon is proud of what Journey have already accomplished, but he is more interested in what comes next for the band, believing that fans expect them to keep striving, too. “I always like moving forward. I don’t want to sit in neutral. I don’t want to go backwards, definitely,” he says. “I think we have a lot of life left in us, and I think we should utilize it and not just rest on the laurels. We have a lot of hits, and our fans expect us to play them, but I think they also expect you to create.”

JOURNEY’S NEW ALBUM, FREEDOM, IS OUT TODAY WHEREVER YOU LISTEN TO MUSIC! FOR DOWNLOAD AND PURCHASE OPTIONS, CLICK HERE!