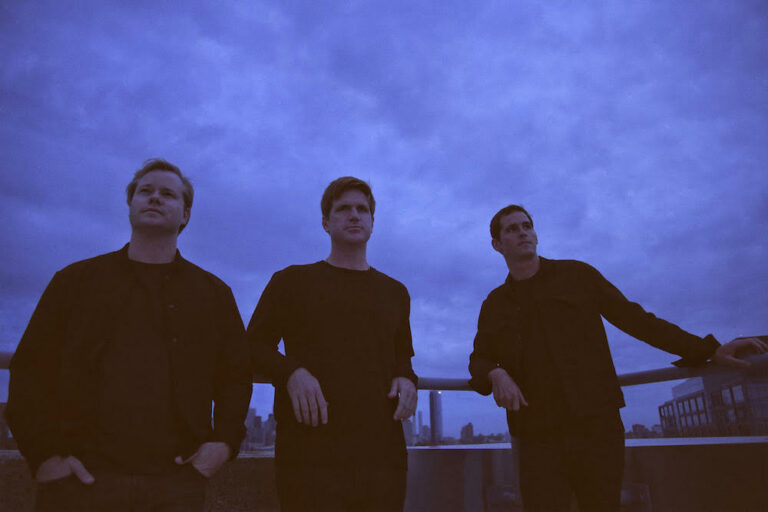 With over a quarter million monthly listeners on Spotify, this energetic Big Apple trio is on a path to take their electric alternative sounds far and wide.

Rock trio VHS Collection has put together a memorable, captivating collection of songs with their new album Night Drive, which sounds like something East Coast Rocker would’ve covered. Like us, the band, comprised of James Bohannon, Nils Vanderlip, and Conor Cook, do have New York City roots to pull from. Their upcoming plans and goals include playing parties for friends and hitting the dives of the LES to garner even more attention for their rock synth music.

The edgy electronic band’s turning point came when they played Baby’s All Right in Brooklyn and a concert promoter saw them shine, quickly asking them to play Lollapalooza. Soon after they were also invited to play Austin City Limits and Governors Ball among other music festivals. The Aquarian sat down with Conor Cook to discuss the origins of the band, their new album, and what’s next for the group whose career began in front of the greatest city in the world.

How did the band meet?

I went to grade school with James Bohannon in New York. We both messed around with music in grade school. James went to high school with Nils Vanderlip. We jammed here and there through the years – we weren’t doing it as seriously. We started playing shows at friends’ parties and we played at the lower east side bars. Then we started to learn how to work synthesizers. We tried to get better and better at each show. We hired a producer and that’s when we learned how to flesh out songs.

What does Night Drive mean to the band?

I think we were always eager to record songs and put out material. We were always learning along the way. The last album didn’t seem refined as much as Night Drive. We honed in on what our sound is. We had a better sense of what we wanted with this record and what we wanted to avoid. I think we achieved that. In the middle of the writing process we honed in on a darker vibe in the album. The album has a darker tone over all.

Producer Tony Hoffer got on board with the band for the new album. How was it working with him?

Tony Hoffer was a big piece of the project. We liked his work as a producer and a mixer. He worked with M83, the Kooks, and Phoenix. We enjoyed working with him and there was a good vibe in the studio. He was good at taking ideas and telling us what needed to be changed. He gets what we wanted to do. He understands drum programming, analogue synths, and vocals. We knew we wanted to work with him from the beginning. It was helpful to have an outside perspective and Tony did a great job with that.

How difficult was it to record the album during the pandemic?

We were suppose to record in April 2020 and go on tour that fall and then everything got shut down. That’s when we recorded everything separately. We were antsy to get the album done. Once we got back in the studio, it was good.

“Survive” is the standout song from the album. How did that song come about?

James and Nil wrote that song. It was an acoustic song originally and initially didn’t want to put it on the album. [However], we felt, lyrically, it was strong. I think it reached out to people during the pandemic. We wanted to write more serious songs, too. It felt right from that standpoint. Everyone goes through their ups and downs and it’s about getting up again.

Your influences range, but I hear a bit of One Republic on this new record.

I wouldn’t say One Republic is one we talk about a lot, but I see it with this album. We do love the Killers, Daft Punk, the Strokes, Phoenix, M83. We love band or artists that have a sound of their own. Even if it’s rough around the edges, that’s what makes it great. Hot Chip and LCD Soundsystem were influences on the first album. We are a rock band that has electronic sounds.

What do you want your fans to take away from your music?

What’s next for VHS Collection?

We haven’t played any of these songs live yet. Our focus is on the tour right now. Playing live is important to us and part of the visibility of our music, so we will be playing Brooklyn Steel in New York City this summer.

FOR TICKETS TO SEE VHS COLLECTION LIVE ON TOUR AT BROOKLYN STEEL ON JULY 28, CLICK HERE!