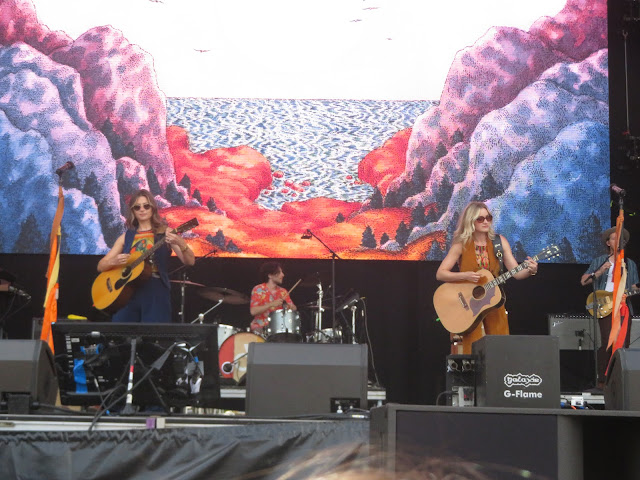 Only Music Reigned at This Year’s Governors Ball: The Weekend Recap

Summer weekend music festivals are making a comeback, with Governors Ball launching three days and nights from June 10 through June 12, 2022. More than 60 pop, hip hop, and EDM artists would perform non-stop across four stages from noon to 10:00 p.m. Numerous sponsors promoted products in their huts with hands-on “experiences” and giveaways. Dozens of vendors sold food, drinks, and souvenirs.

Governors Ball is currently the longest-running weekend festival in New York City. The first Governors Ball was held on Governors Island in 2011, then moved to Randall’s Island from 2012 to 2019. The annual festival took a COVID pause in 2020 and moved to the parking lot of Citi Field in 2021 and 2022 […].

Migos was listed high on the bill when the promoter, Founders Entertainment, announced the lineup for the Friday show. The rap trio canceled on Tuesday, however, amid rumors that the group is fracturing. Lil Wayne was booked to replace Migos, but withdrew just hours before his set time due to reported “flight disruptions.” A$AP Ferg became the last-minute replacement and it would be his first Governors Ball since 2017.

“I was just chillin’, and then I got a call from the festival like, ‘Yo, Ferg! We need your ass to come right now!'” the New York City native explained to the audience early in his set. Later in the set, seeing that fans in front were packed too tightly, Ferg paused the music flow briefly and asked everyone to take a step back for everyone’s safety.

The headliner came on stage at sunset. Kid Cudi, who last headlined Governors Ball in 2012, told the audience, “I’m the master of ceremonies, and I’ve come to show you a good time.” He sported a 1962 Los Angeles Dodgers letterman jacket and blue hair. Unfortunately he performed under very dark red, blue, and purple spotlights, so the audience mostly caught just an obscure glimpse of him.

Cudi introduced King Chip (formerly Chip Tha Ripper) and they performed the duo’s 2012 hit “Just What I Am.” Later, Cudi premiered “Do What I Want,” which he released earlier that day as the first single from his forthcoming album, Entergalactic. The new album is the soundtrack to Cudi’s upcoming adult animated Netflix series of the same name.

While most of the performers were designed for a younger audience, Black Pumas performed a rock and soul set for the adults in attendance. Early in the set, singer Eric Burton made a rather dangerous seven-foot leap from the stage into the photo pit. He continued singing as he walked up and down the corridor separating the general admission and the VIP section, connecting with fans. Later performers also came off the stage to the audience below, but did it in gradual steps – not a seven-foot leap.

Coi Leray […] had a stage show that was all about sensuality, even inviting a woman onstage from the audience for an impromptu lap dance. Sisters Aly & AJ performed songs from their days on the Disney Channel along with new indie songs. New York artist Blu DeTiger performed on two different stages, singing originals as well as interpreting covers of MIA’s “Paper Planes” and Gorillaz’s “Feel Good Inc.” Not playing on any formal stage, the unplugged Brass Queens returned to Governors Ball, walking through the crowds and attracting small crowds when stopping to play a couple of instrumentals. Jack Harlow, Louis the Child, Quinn XCII, the Knocks, Skepta, Julia Wolf, JPEGMAFIA, Channel Tres, Beabadoobee, Samia, Kaleena Zanders, Paris Texas, Julia Wolf, Between Friends, Plastic Picnic, Kaleena Zanders and Erika the DJ also received positive receptions on Day One of the Governors Ball Music Festival 2022.

Roddy Ricch Is Arrested, Halsey Does Stranger Things, & Shaquille O’Neal Is a DJ

Roddy Ricch drew a crowd of thousands, but the rapper was unable to perform. The New York Police Department arrested Ricch and two other men on gun charges (that were later dropped) during a vehicular security check at Citi Field shortly before Ricch was scheduled to perform. […] A half hour after Ricch’s 6:30 p.m. set was to begin, festival organizers notified the audience via electronic signage that Ricch would not be performing, providing no further explanation. Organizers encouraged the attendees to visit the other stages, where Denzel Curry and Joji were performing.

Halsey was the main headliner for the second day of Gov Ball. The singer started the set by declaring, “If you think you know what this show is going to be like, I’m going to change your fucking mind.” Halsey, born Ashley Frangipane in Edison, New Jersey, and who uses both she/her and they/them pronouns, later relayed a story first shared when they performed at Governors Ball in 2018. They attended their first Governors Ball in 2014, on the same day they signed their first recording contract while wearing a Governors Ball wristband, and wondered if they would ever perform at the festival.

Halsey’s performance focused on the more rock-leaning side of their catalog, with two newer additions to the 16-song set. They performed their new single, “So Good,” live for the first time. They also covered the currently-trending “Running Up That Hill (A Deal With God),” a song Kate Bush recorded in 1985 that recently became a hit after being included in an episode of Stranger Things. “I just had to do it! I’m sorry, guys, I just had to do it!” they told the cheering audience. Halsey’s set ended with a fireworks display.

Before YG came on stage, his disc jockey amped the crowd to “open up the mosh pit” and the crowds both in general admission and VIP did as requested. YG later took a political turn. “We in New York City, right?” he asked the audience. “Fuck Donald Trump.” He then rapped the song that repeatedly chanted the f-bomb refrain.

NBA Hall of Famer and Newark native Shaquille O’Neal introduced his new side gig at Governors Ball. Yes, he had a platinum-selling rap album in 1993 and acted in commercials for an insurance company. Now, as DJ Diesel, he spun an hour-long set of heavy-handed EDM beats along with snippets of popular songs. The seven-foot-one athlete even invited a fan on stage from the audience to sit on his shoulders as he dj’ed.

Blue-haired Ashnikko wore onstage one of the more imaginative outfits of the festival, along with a touch of curious face painting. An advocate for self-care, she instructed her audience to place a hand on their head, give themselves a “brain hug,” and tell themselves “I love you, you’re doing your very best.” Later, she encouraged her listeners to release an unbridled, cathartic primal scream.

The Governors Ball Music Festival has a history of severe weather canceling parts of the program, but not so in 2022. On day three, numerous large puddles from an overnight storm greeted the attendees early in the day, and then sunny or overcast skies and moderate heat defeated the predictions of further rain. J. Cole headlined and the day was filled with performances by Playboi Carti, Kaytranada, Jazmine Sullivan, Glass Animals, Japanese Breakfast, Clairo, Becky G, 100 gecs, J.I.D, COIN, Soccer Mommy, Surf Curse, Duckwrth, Del Water Gap, Ken Car$on, the Brummies, Jax, De’Wayne, Kaien Cruz, and Chris Andrew across all four stages.

“I’ve been playing basketball,” J. Cole told his audience of several thousand fans below him. “I came here to see if I could still rap.” Cole’s most-recent New York City performance was in 2021’s Rolling Loud Festival. Since then, he has been playing basketball for a Canadian minor-league team, the Scarborough Shooting Stars. He performed a career-spanning set, including songs off his appropriately-titled 2021 album, The Off-Season.

“It’s so crazy to be here, with the train going by,” Cole said as he watched the subway roll on the elevated tracks just outside the field grounds. “I used to live right down the street, writing songs as the trains go by.” The audience cheered when he concluded on a note that New York was a second home to him

Many music acts incorporated visually stimulating moments into their performances. Glass Animals brought the stage set from the band’s 2021 tour, in which the resort-themed design placed the audience within a swimming pool, below the band’s diving board. Michelle Zauner of Japanese Breakfast banged on a Chinese gong surrounded by a wreath of colorful blossoms. Coin included a huge three-dimensional ladybug as part of its backdrop. 100 gecs started its set dressed as wizards. Duckwrth wore a flaring dress that looked like it was made from a military parachute. Nevertheless, Playboi Carti’s performance at the end of the weekend was the most radical.

A massive pyramid-like structure covered the full staging area surrounded by constantly billowing fog. Much like a moonlit graveyard scene in a horror movie, from the darkness the audience heard death metal rock along with screams and growls. Playboi Carti performed his entire set in the shadows of this thick fog, such that the audience never saw him clearly, only his silhouette. A guitarist, also barely visible in the dense fog, played death metal leads and riffs from the base of the pyramid, while Carti shrieked, howled, and rapped, often from the top of the pyramid. Recurring towers of fire added to the eerie setting.

“I didn’t know if you would all come today,” singer Michelle Zauner told the audience gathered to hear Japanese Breakfast, “but you came through, New York, as you always do.” Since many in the audience saw her last, Zauner has been branching beyond her role as pop singer. Her 2021 book, Crying in H Mart: A Memoir, made the bestseller list in the New York Times, and she is rewriting the book into a screenplay for a movie. Just a few weeks ago, she was at Citi Field for another reason. “We’re from Philly,” she reminded the audience. “I am returning to the scene of the crime, where I threw out the first pitch here for the Mets.”

J.I.D performed earlier in the day and at night came back on stage with Kenny Mason for J. Cole’s set, where the three performed “Stick.” At this time, the audience learned that J.I.D’s fall during his afternoon set was more serious than anyone thought, including J.I.D. Before the trio started, J.I.D told the audience, “I want you to be safe out there.” He raised his arm, showing his hand wrapped in bandages. He continued, “I broke my hand earlier during my set because I was raging too hard. Don’t be like me.” He advised those who felt uncomfortable with mosh pits to move back. “I see fun. I see mosh pits. I see safety.” Raising his hand again, he said, “Listen, I’m serious, don’t be like me. Have fun.”

At 10:00 p.m., the final musical notes were played, the music fans walked to the subway station or other methods of transportation, the musicians began their exodus to their hotel rooms, the stage hands began dismantling the stages, the food vendors packed their vehicles with their leftovers, and everyone involved in the production likely began counting their profits. The festival ground would soon resume its role as a parking lot for New York Mets fans. Rolling Loud New York will transform the open pavement again on September 23-25, with Nicki Minaj, A$AP Rocky, and Future headlining what is billed as the world’s biggest hip hop festival. Until next year, Gov. Ball!

FOR THE FULL ARTICLE AND PHOTOS, VISIT EVERYNIGHT CHARLEY’S BLOG, THE MANHATTAN BEAT!