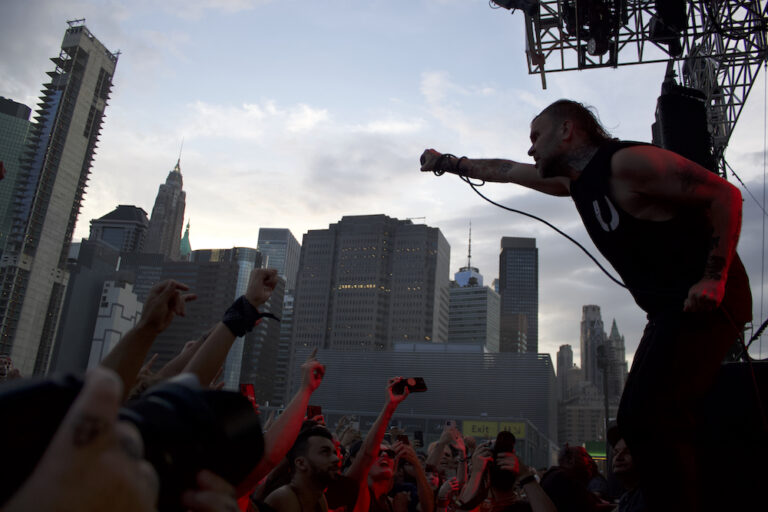 Rise Against stopped at The Rooftop at Pier 17 on August 9 for the Nowhere Generation Tour alongside special guests The Used and Senses Fail.

My experience began by hopping on a train to NYC and running against the clock for a 6:00 p.m. show start. I took the 2 train to Fulton and ran to the South Street Seaport, checked in at the box office for my photo credentials, took the elevator up to the roof just in time for Jersey’s Senses Fail to hit the stage. The legendary emo band consisting of vocalist Buddy Nielsen, guitarists Gavin Caswell and Jason Millbank, and drummer Steve Carey ripped through 10 classics, including “Calling All Cars,” “Bite to Break Skin,” and “Buried A Lie.”

Though they’ve been a band for over 20 years, their stage presence and charisma are those of a band twice that. Energy radiated from them through the crowd. And they even did little teaser covers of Disturbed’s “Down with the Sickness,” Limp Bizkit’s “Break Stuff,” and Rage Against The Machine’s “Bulls on Parade” with their own twist.

After their set, an announcement was made of a lightning threat and all attendees had to evacuate the roof and be escorted into an indoor, unfinished portion of The Pier underneath the rooftop. An estimated 15 minute delay turned into 40 minutes and although no lightning struck, the staff at The Rooftop had excellent professionalism in ushering patrons off and back on the roof. Better to be safe than sorry.

Because of the lightning delay, the Used’s hour-long set was cut to around 40 minutes. Utah’s best emo band consisting of guitarist Joey Bradford, bassist Jeph Joward, drummer Dan Whitesides, and lead singer Bert McCracken hit the stage at 7:40 with “Maybe Memories” from their self-titled debut. Around Bert’s mic-stand was a Palestinian scarf and he made a few remarks in support of Palestine to cheers.

“Sorry about the lightning delay,” Bert said after a few songs. “We are the fucking Used. We’ve been emo for 22 years and we’re not going anywhere! The only thing you have to do at a Used show is have a smile on your face.”

The band played through an abridged 40 minute set with nothing but killer choices; “The Bird and the Worm,” “The Taste of Ink,” and “A Box Full of Sharp Objects” being crucial standouts to my relished delight. The first sign of moshing occurred during “Pretty Awkward Handsome,” their penultimate song. And before the final track of “Sharp Objects,” Bert recited the entire monologue from Hamlet.

The sun set over the East River and Rise Against took the stage promptly at 9:00 p.m. to the tune of “Prayer for the Refugee.” Frontman Tim McIlrath jumped on stage to drummer Brandon Barnes’ riser before taking his spot centerstage. “Prayer for the Refugee” was once my hype anthem for my high school track and field career, years after it was popular. Bassist Joe Principe and guitarist Zach Blair stood on opposite sides of the stage and brought ferocity with their strums.

The second and third songs in their set were “Under the Knife” and “Satellite,” complete with me shouting along to every word from the photo pit. Tim grabbed a bullhorn for “Satellite” and sang a refrain of the chorus.

Having seen Rise Against several times before, their production is always great. Their lightshow, usually accompanied by a visual screen, was replaced by a stunning view of the Brooklyn Bridge.

After “The Violence,” Tim addressed the crowd: “How many of you are seeing Rise Against for the first time?” Lots of cheers. “How many have seen us before?” Louder cheers. “At the Rise Against show, for 20 years, we’ve sung songs about change, hope, awareness, staying alive, revolution. We hear that word a lot… there’s no racism in revolution, no sexism, no homophobia, no neophobia, no religious hate at the revolution. If someone says otherwise, you  might be at the wrong fucking revolution. At Rise Against shows, we dance.”

With that, he signaled for a circle pit as the band struck up “Collapse (Post-Amerika.)” A fan holding a vinyl copy of Appeal to Reason in the circle pit had their copy held safe by Tim who struck up “Re-Education (Through Labor)” off that album.

Every song they played was a certified hit; “Hero of War,” “Give it All,” and an encore of “Survive” and “Savior.” Rise Against always deliver an incredibly sound show – from performance to production to energy in the crowd. This was my third time seeing them, and it will not be my last.