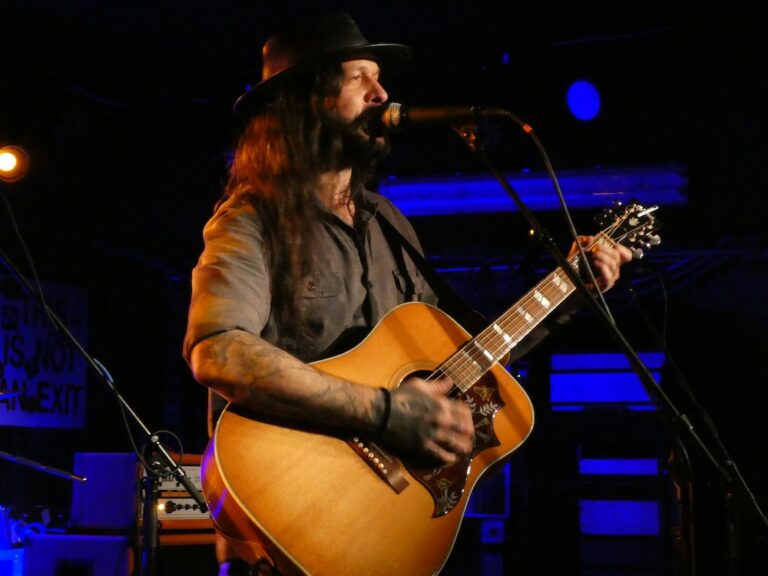 Shawn James has a voice so rich and thick that he probably could sing “Mary Had a Little Lamb” and make it thrilling. His soulful baritone easily engages the listener because it is so uniquely heartfelt, earnest and strong. Thankfully, he has good original music and so has not considered adding children’s lullabies to his repertoire.

As a youth, James sang in the choir of a gospel church in his native city of Chicago, Illinois. This experience fed into his singing style, as did his later interest in American blues, folk, rhythm and blues, and rock. He started playing acoustic guitar while in high school and started writing songs seriously in his mid-twenties.

James started his professional career in music by working as a sound engineer at music studios in Nashville, Tennessee. In 2012, he moved to Arkansas and busked on the streets of downtown Fayetteville and performed in local music venues while recording his first album in his bedroom studio. In 2013, he formed his backing band, the Shapeshifters.

James achieved some notability in 2015 when his cover of A. A. Bondy’s “American Hearts,” filmed in a wolf sanctuary, went viral online. In 2016, James experienced a greater breakthrough when his 2012 song “Through the Valley” was covered by the character of Ellie in the reveal trailer for the 2020 video game The Last of Us Part II. James’ music also was featured on television’s Yukon Men, Reckless, and Shameless.

James has released six albums under his name and five albums with the Shapeshifters. He released his most recent solo collection, A Place in the Unknown, on February 25, 2022. He now resides in Seattle, Washington.

With his long hair, dark beard, black leather hat, and his rolled-up shirt sleeves revealing numerous tattoos, James looked earthy, like a woodsman, and his intense vocals occasionally sounded like back porch ravings before a full moon. At Mercury Lounge, James started his performance playing melancholy heartland rock with his band. He then performed a few songs solo accompanied by his acoustic guitar. To close, he rocked hard with his band. James covered a broad range in an hour-long set.

James has a talent for reinterpreting cover songs. He skillfully offered compelling interpretations of Bill Withers’ “Ain’t No Sunshine” and Frank Sinatra’s “That’s Life” during the solo portion of his set. Perhaps the most riveting cover was his slow, angst-filled, stripped-down, and violin-led version of Iron Maiden’s “The Number of the Beast.”

James’ strongest and most gripping moments, however, were when he sang his original songs. Gruff and husky, his voice was haunting and his lyrics often featured foreboding images. An electrified violin added to the mysterious atmosphere.

Even after 10 years of recording and touring, James is hardly known, filling only smaller-capacity venues. Perhaps his performance is too soulful and too impactful for mainstream audiences seeking lfeel-good pop superficiality. One thing is fairly probable, however; any serious music fan who attends James’ concert will look forward to repeating the experience.