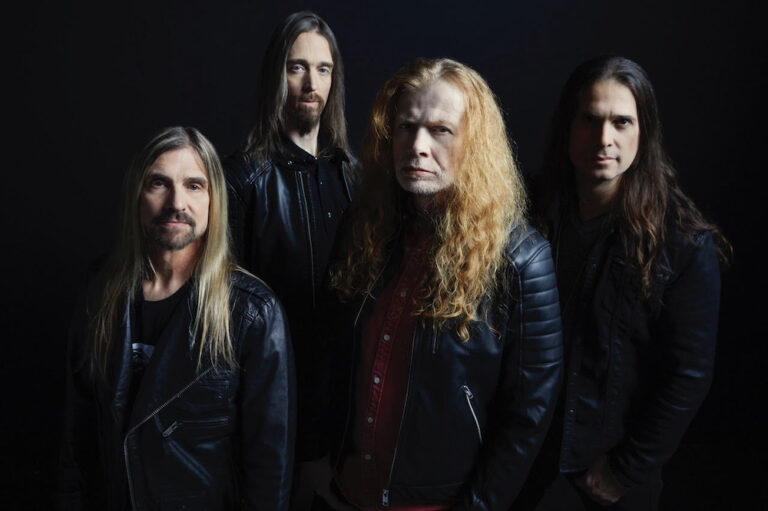 Megadeth – More Connected Than Ever

Megadeth guitarist Kiko Loureiro had plenty of time to prepare for, and contribute to, The Sick, the Dying… and the Dead!. The iconic thrashers’ 16th studio album, released September 2, is their latest metal masterpiece. Loureiro has songwriting credits with bandleader Dave Mustaine on eight of the 12 tracks. That’s a far cry from when Loureiro joined Megadeth in 2016. Three weeks after entering the fold, he was in the studio recording the band’s previous album, Dystopia.

Loureiro has since performed on several tours and become fully integrated into the Megadeth family, first onstage and now in the studio. The six-stringer is a sight to behold live. After witnessing his flawless and aggressive yet dynamic live attack, and the way he weaves in and out of solos with Mustaine, it’s not at all far-fetched to say that the Mustaine-Loureiro team may be the best guitar tandem in Megadeth’s nearly 40-year history.

Mustaine, of course, is a legendary metal figure. The singer/guitarist is a prime architect of thrash metal. His complex and intricate riffs and rhythms; wild, infectious solos; acerbic wit and caustic, snarling vocals; and sharp, powerful and biting lyrics have come to define the genre, and all are in abundance on The Sick, the Dying… and the Dead!. Megadeth is best known for definitive albums like Peace Sells… but Who’s Buying?, Rust in Peace, and Countdown to Extinction. Latter day output such as Endgame, Th1rt3en, and Dystopia see the band continuing to up its game.

In addition to featuring Mustaine and Loureiro, The Sick, the Dying… and the Dead! is the first Megadeth studio album for energetic drummer Dirk Verbeuren. Steve DiGiorgio (Testament) lent his remarkable bass work and bassist James Lomenzo has since rejoined the band.

The album’s opening title track storms the gates with galloping rhythms, biting riffs, and fluid solos. The song is prophetic: it describes the Bubonic Plague and was written just before the COVID-19 outbreak. Additional highlights include “Life in Hell,” a juggernaut with riffs stretching to the horizon, and “Night Stalkers,” which swoops in with menace and features a guest appearance by rapper Ice-T.

“The Dogs of Chernobyl” explores the feelings of someone abandoned in a relationship. “Junkie,” with its precision riffing, would fit nicely on “Countdown to Extinction,” while the frenetic “Célebutante” comes crushing down like an anvil. Album closer “We’ll Be Back” spits gravel and shows that Megadeth is both confident and still hungry. Overall, The Sick, the Dying… and the  Dead! will please fans old, new, and in-between. We recently chatted with guitarist Kiko Loureiro about just that.

There was a six-year gap between The Sick, the Dying… and the Dead! and Dystopia. What accounted for the time in-between?

The Dystopia album was very successful. We won a Grammy for it. Then there was a first leg of touring, a second leg, a third and fourth leg – a lot of legs. So the tour was long, I believe, because of the success of the album. In 2019, Dave was diagnosed with [throat] cancer so that was like, “What are we going to do?” Dave decided to keep going and just start recording the album. Actually, we were about to do a tour with Ozzy [Osbourne] in the summer of 2019 and that was postponed. Because of that, it was like, “Let’s start thinking about the new album,” because it was already two-and-a-half years. Then, cancer, and we pushed back seven to eight months. We were able to start the process of composing the album then. Dave was doing the first stage of the treatment and spent three months composing and recording the demos and all that in Nashville. Then there was a gap. We did a tour in Europe. Then the pandemic, which made things even more difficult. Otherwise, it would have been a three-year gap, which would be natural for a band like Megadeth.

You joined the band only a short time before going into the studio to record Dystopia. On The Sick, the Dying… and the Dead! you have a considerable amount of songwriting credits. What were you able to gain in the songwriting process and assimilating into the band from that time until now?

For me, personally, it’s a big difference. When I joined, it was like two weeks later that I was inside the studio in Nashville and they were like, “This is preproduction for the new album.” I got to know Dave there and the producer [Chris Rakestraw]. Now everything is different. After so many concerts, so many tours, after traveling to so many different places, getting to know the catalog, playing the old songs, and getting to know Dave and the crew and the whole of Megadeth… you are more connected. The music is not easier to play but it’s easier to be open when you have ideas and want to say something. I’m part of this now, I understand, I know what to say, what to not to say, the personalities, what they like and don’t like, and know what to expect. It’s a basic human relationship. To be very creative a healthy environment is very important.

What is your approach to songwriting?

When you create something, it’s like pure intimacy. We always have the fear of being rejected, that if you show that idea and someone is like, “I don’t like your ideas,” it’s like they don’t like you. Musicians are very sensitive. The more you get to know each other the easier it is. It’s like, “Here’s what I have and if you don’t like it, it’s fine.” The collaboration and learning how to be together, to learning what is good for the band, this all helps.

I’m immersed in this Megadeth thing. I can play a riff or a musical idea knowing if it’s right for Megadeth. Then I can write it. I brought a lot of stuff, compilations of riffs and ideas. I know the direction if I work toward pleasing Megadeth, not Dave, not the fans, but the concept of Megadeth. If I work towards that, I will please the legacy and increase my chances that Dave will like it and the fans will like it.

How is The Sick, the Dying… and the Dead! a progression from Dystopia?

I believe what I’m proud about this album is to be able to reach that Megadeth place. Dave is the one that understands Megadeth better than me, of course. He’s the guy that created that style. I feel like understanding my place gives me confidence. The singles, like “Night Stalkers” or “We’ll Be Back,” is with the riffs that I proposed being there, so that is a great achievement for me. “Célebutante” is another one that I really brought most of the guitar parts. Also, I really like the song “Dogs of Chernobyl.” It’s one of the first songs Dave brought and I had the chance to put on the acoustic guitar, create that Eastern European vibe. It was the first song that was ready, and we just had feeling of we’re going somewhere and this place is good. That was a great feeling.

Did you grow up a Megadeth fan?

I listened to Rust in Peace and Countdown to Extinction – all the albums. As a fan, I remember how I reacted to them back then. I remember going to the Rock in Rio II Festival in ’91 and seeing the guys playing “Rust in Peace” in front of me. I had that great feeling watching Dave onstage. That’s my work now: how to transform that feeling into notes.

The band seems extremely confident on the album, and hungry. How would you describe Megadeth’s state of mind right now?

We’re very confident and that’s great. Because of this whole journey, this process, with those breaks, things that you had no control over, the cancer, the COVID, and then we kept going. Dave is very confident and more proud of what we’ve done.  We have the legacy there and now we have the new album.

Do you like touring for long periods of time?

On tour, you’re onstage and have the great moment. Then you have the waiting, the lack of sleep, and it’s hard. But we are comfortable, we have nice hotel rooms, so I cannot complain. Even though you get tired, missing your family and things that you do when you are at home, we have a great environment that helps us to perform better on the album and onstage.

Well, what can I say? I think he’s one of the greatest. He is Megadeth.  I also love his lyrics. The music part has to be great and when it’s combined with great, timeless lyrics then you have songs like “Symphony of Destruction” or “Holy Wars” or “Peace Sells.” They’ll be around forever. I believe the new album songs will be there as well for a long time. They have those two elements: great music and a great message.