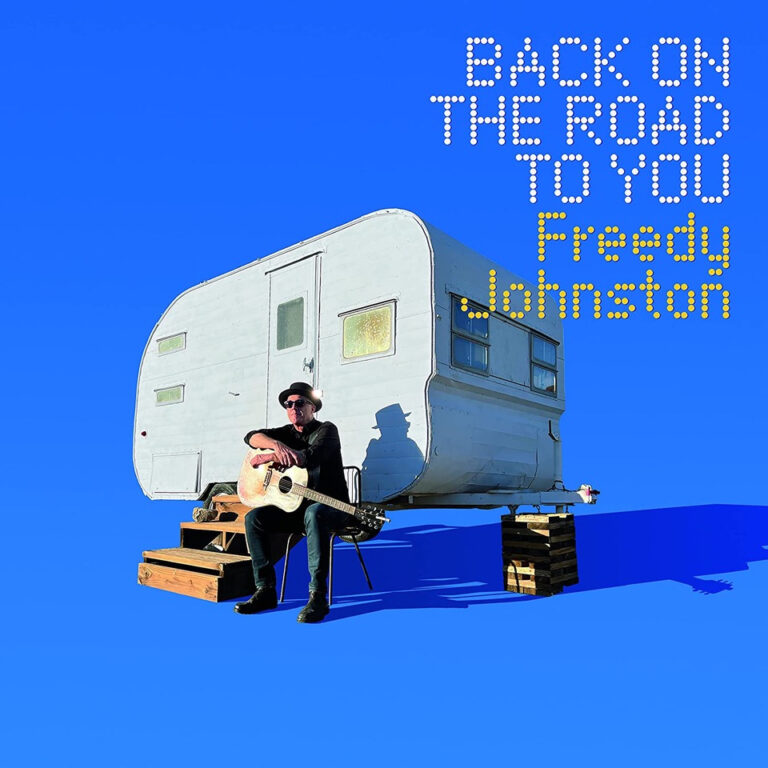 Freedy Johnston, Back on the Road to You. Given her love of late 1960s and 1970s pop and rock, it’s easy to see why the Bangles’ Susanna Hoffs agreed to back up Freedy Johnston on his wonderful ninth album, which also features guest spots by Aimee Mann and Susan Cowsill and a top-notch four-piece backup band.

The charming, 10-track set offers a reminder that you don’t need a fancy production with elaborate studio embellishments to deliver a winning sound. All you need are some passionately sung, tightly constructed songs, complementary instrumentation, sweet melodies, and a compelling voice, which is exactly what we have here. Witness such irresistibly hooked, exuberant love songs as “There Goes a Brooklyn Girl” and “Darlin’,” just two of the several minor masterpieces on this record, which seems destined for a place on Best Albums of the Year lists.

I Draw Slow, I Draw Slow. Once upon a time, the words “Irish music” conjured up groups like the Chieftainsand the Clancy Brothers. They still might but in the rock era, the genre has also come to embrace such acts as U2, Sinead O’Connor, and Van Morrison, as well as the band that produced this excellent but decidedly non-traditional CD.

Led by the brother/sister team of guitarist/vocalist Dave Holden and singer Louise Holden, who co-wrote all the songs, Dublin-based I Draw Slowly additionally features a bassist, a banjo player, and a fiddler. You can hear hints of the group’s Irish roots in some of its music, as well as American country and Appalachian styles and even New Orleans jazz (on “Trouble”). What predominates, though, variously recalls 1960s British folk groups and – on portions of numbers like “Leisureplex” and “Copenhagen Interpretation” – a more folk-focused variation on the Mamas and the Papas.

Jimmy Carpenter, The Louisiana Record. Can’t fit a trip to the great music clubs of New Orleans’s French Quarter onto your calendar anytime soon? Here’s the next best thing: an album dominated by covers of Louisiana-rooted rock, soul, blues, and R&B by saxophonist and singer Jimmy Carpenter. The set, which sounds as if it was recorded live in the studio, features a hot band that includes co-producer Mike Zito on guitars as well as a bassist, a keyboardist, and a drummer.

Party-ready versions of classic material fill the album, which opens with a spirited reading of Dave Bartholomew and Pearl King’s “I Hear You Knockin’,” the song Fats Domino memorably recorded in 1961. Other highlights include dynamic renditions of James Waynes’s “Travelin’ Mood,” which was a standout on Dr. John’s In the Right Place LP; Allen Toussaint’s “All These Things,” which was first recorded by Art Neville in 1962; and Chris Kenner’s “Something You Got,” which has been successfully covered by multiple singers. Carpenter also slips in a few numbers that didn’t originate with New Orleans and its artists but achieved popularity there, such as “Bring It on Home to Me,” by the great Sam Cooke, and “Cry to Me,” the Bert Russell number that Solomon Burke recorded.

Granted, the best-known previous versions of most of the songs on this record are hard to beat, but Carpenter, who lived and recorded in New Orleans for more than a decade, takes a good shot at all of them.

The Commonheart, For Work or Love. This third Commonheart album delivers new material from a Pittsburgh-based octet, but it sounds as if it would fit right in on the monumental Complete Stax-Volt Singles box set, which collects Southern soul, funk, and R&B classics released between 1959 and 1968. Group leader Clinton Clegg – whose early influences range all the way from B.B King to Green Day – is a talented writer of love ballads and sax- and trumpet-spiced high-octane blues. He shines as a vocalist, whether he’s belting out a gritty midtempo rocker like “All I Ever Wanted” or projecting vulnerability on an emotive ballad like “Far Enough,” where his vocals share the spotlight with just acoustic guitar and piano.

Kudos to producer Steve Berlin (from Los Lobos, a band that the Commonheart has toured with). He has done a good job of helping Clegg flesh out his story songs while crafting a sonic backdrop that accents rather than gets in the way of the singer’s soulful vocals.