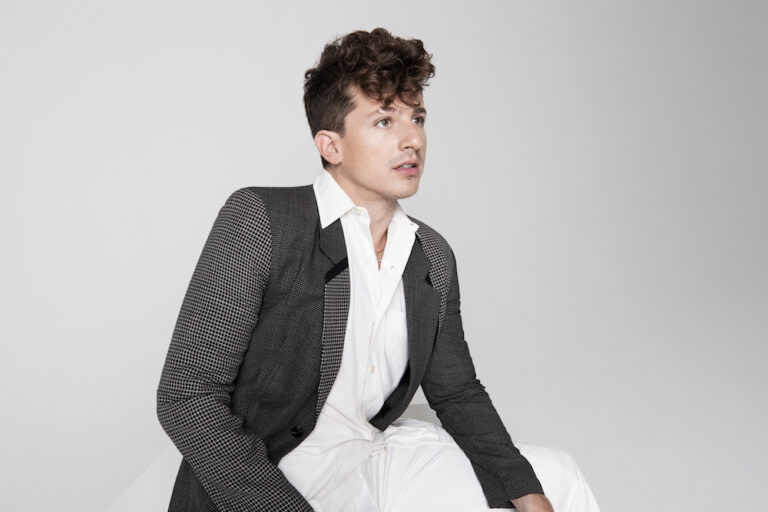 On His Mind & In His Art – A Conversation with Charlie Puth

Charlie Puth exudes musicality. Even as he stumbles around well-deserved accolades, you can feel the precision in the words he choses and the tone he speaks in. It’s a marvelous thing to encounter, especially as kindness and passion is often what follows suit.

“At times I just felt like I said everything I needed to say in that one song,” he tells us about the making of his latest LP, CHARLIE, which a 12 track record, a solid 32 minutes of personality, musicality, trials, and triumph. Time-and-time again, Charlie Puth proves that ability is only half the battle of artistic success. You need drive, hopes, dreams, and grace, but also a genuine, open-minded approach to nerves. Being nervous makes things real… reminds you that you’re human.

Known for his multitude of talents, including a fine-tuned ear and perfect pitch, it’s no wonder Puth is one of the biggest names to come out of Garden State in recent decades. He is notably up there with the likes of Bon Jovi and My Chemical Romance while rivaling the home state pride of The Boss himself and going toe-to-toe on the charts with fellow pop-tinged New Jerseyians, the Jonas Brothers.

As Gen Z would explain it, Charlie Puth creates hits, produces bangers, and writes bops – but that is not all he is or all he does. He collaborates, inspires, and expresses himself; for no matter how uncomfortable you are with doing so, there is a beauty in vulnerability. This new record of his, the self-titled CHARLIE, is the pinnacle of that. You have bouncy and bold pop soundtrack moments intertwined with intricately-crafted narratives that swallow you whole. The singer-songwriter brings this album, as well as his ever-growing discography, to the beloved Count Basie Center for the Arts this weekend; this, of which, we were ecstatic to talk to him about.

You’ve been a household name for some time now and have had varying eras of hits over the last eight years, give or take. Your fans are growing up with you – they watched, and heard, your twenties unfold. How does that make you feel? Do you think about that ever?

I do. I think about how different I personally was four or five years ago, and just how much I feel like I’ve personally evolved into an even better version of myself.

Of course. It’s important to have the ability to reflect and you, as an artist, have things truly out there in the world to listen to and to think back on. For better or for worse, it’s always out there.

Definitely. I mean, the biggest thing I want my fans and people who choose to listen to this album to take away from it is the fact that they can go through life –go through ups and downs just like I did during the creation of this album – and they can put it into art like I did. They can either make light of a heavy situation or simply just talk about a situation. Everything is made into art […] and nothing is impossible.

I’m looking at my notes from my first full, cover-to-cover listen of CHARLIE and I wrote that it is ‘riveting and introspective, worthy of being self-titled.’ I’m glad that you kind of came into that mindset, as well.

Oh, wow. Thank you! I feel like if these songs looked at themselves in the mirror, they would see a reflection of me… presumably wearing a white tank top, like on TikTok.

[Laughs] I think that’s perfect – simple, but effective. That’s actually another thing about this record that’s done right in my opinion: it doesn’t feel too long. It doesn’t drag anything out – positives or negatives. You show what you want to show, inspire how you need to, find some and find some catharsis. People can hear that, but still find what they want to hear on it.

Thank you. Yeah, that’s right. There’s a saying that one sentence should spawn off into 400 different thoughts. I think that’s how a great song is made. Now, I’m not saying this is the best album in the whole world, but, to me, for my story, it certainly colors a very important time of my life. I wanted to be specific, obviously, and talk about what went on during these two years, during its creation, but I want to relate to it most importantly – so that other people can.

Oh, for sure. You have a song like “When You’re Sad, I’m Sad,” which people can take and listen to at any point in their life and kind of see themselves in it, even if it’s not 100% about their exact situation. I find that’s the same with “No More Drama,” which is a perfect album closer, I have to say.

Thank you. That’s the reason why that song is Track 12… after all that I went through, I’ve come to the end and I’ve moved on from all those feelings of bitter resentment and self doubt. I have no more drama in my life.

I’m curious, you know, what songs off of this record are you excited about playing at these shows or are you having a great time performing? Cuz I know artists always tell us how songs kind of take on new meetings and new styles when brought to life on stage. Are you experiencing that or is there anything that stands out to you thus far?

I’m really excited to see how track two, “Charlie, Be Quiet!” translates into a live setting. And based on your reaction, it sounds like you are, too. Yes, it’s an unusual sounding song for me. It’s very guitar based and almost too loud at some points. It’s not mixed perfectly, but I think that adds to the sort of messed-up-ness about it, kind of adding to the charm of it. This is a song coloring my chaotic mind that never seems to shut off – musically, especially, which is why certain parts get loud and some parts get soft as to parallel to how my mind is thinking.

My note for that song is that it is ‘off-the-wall groovy’ and I do think it is!

I appreciate that! My mom uses the word groovy. I’m glad everyone’s bringing groovy back. It’s a good word.

With the right placement, groovy can describe anything… even a concert. We know you have this ‘One Night Only’ show in Red Bank this weekend. Red Bank is pretty much your childhood backyard, so as someone who was also born and raised in New Jersey, does returning to Jersey and playing in your home state feel different to you in any way than another state or any other cities? Is there a new type of pressure or more emotion? Or is it maybe the opposite – more freeing because it is where you grew up?

It definitely feels the most familiar. I recognize people in the audience and I do feel the most love. I seem to get the loudest responses from my hometown shows, but I’m especially excited to play at the Basie this time because I’m not gonna be able to do these shows every year coming up. This is kind of the last time where I’m gonna be playing this size of venue, and I love playing these size venues because I feel like I can really reach out to the crowd and speak to them.

The intimacy of a place like Count Basie is really vital to good songs, musically and lyrically. I love arenas. I love stadiums. Smaller places, though, like amphitheaters and clubs, have their special time and place when you’re there to hear songs or tell stories or build narratives.

Absolutely. I couldn’t agree more. I mean, you said it best, so if I could just copy and paste what you said…

[Laughs] New Jersey, like you said, grants you some really big applause because people are rooting for their own, but also just adore your music. You are someone who takes from their life, their childhood, their upbringing, and brings it to where you are now to create something new. You’ve never really strayed from who you are as an original organic singer-songwriter. Do you ever feel when you’re writing songs, or even performing them, that it’s almost too personal? Songs that have you think, “Maybe I shouldn’t release that. Maybe that’s more for me. I would be too nervous for some of these things to be out in the world – as art or not.”

I think that as long as you acknowledge that there are nerves, you’re good. This is what I’ve learned: don’t ignore the nerves, just like you don’t ignore telling the truth while writing the song. If you wrote it for a reason, don’t now get nervous about performing it or worried what people are gonna think too hard on the message. When we make a song feel like it’s perfect, saying, “This is the next single, this is gonna be the biggest song in my career!” and then it gets put out in the world and people judge it and rate it, it takes a shot at our confidence. We tend to feel that way as humans. You don’t ignore media outlets and you don’t ignore people’s opinions, because you definitely want to make music for the people, but you also have to remember why you made the song in the first place.

Absolutely. Being nervous is probably the biggest thing that you’re going to have to overcome as an artist, but you’re doing it for the art, which in itself shows you care about it… and yourself.

I care about myself and I care about people’s reactions to this music I make. I hope that they can listen to this album like you’ve listened to this album and create their own memories to it and apply their own to the songs and realize that I go through the same things that everybody else goes through.

That’s true! There’s no disconnect there at all; you’re a fan of music and a fan of artists in the same way that we all are.

Oh yeah! I’m a big fan of all your favorite artists that you hear on the radio. I love pop music and I love how it affects people.

A lot of amazing, notable pop music has come out of this place, too. Did anything about the Garden State and its own musical bubble play into this record or any of the songs off of it that you can think of? Because New Jersey’s music scene and overall culture is really its own entity.

It’s definitely its own entity! Rather than saying that it influenced this album, I’d say that Jersey music – from local gigs to musicians who are locally famous and the music stylings of New Jersey like Bon Jovi and Bruce [Springsteen] – has all played a part in different ways. Even from my piano teachers and guitar teachers, it’s always been influential on Jersey, about Jersey. It all started in New Jersey and it’s always been the first major form of influence in any music that I make. Whether it’s this album or the last album or the next album, it always starts from my influences, which is my love of music that originated in New Jersey. Hopefully you can hear it on this album, because you’ll definitely hear it at the Basie and in that live setting.

FOR TICKETS TO CHARLIE PUTH’S “ONE NIGHT ONLY” TOUR, WHICH INCLUDES STOPS IN NEW JERSEY ON 10/23 AND NEW YORK ON 10/25, VISIT HIS WEBSITE!