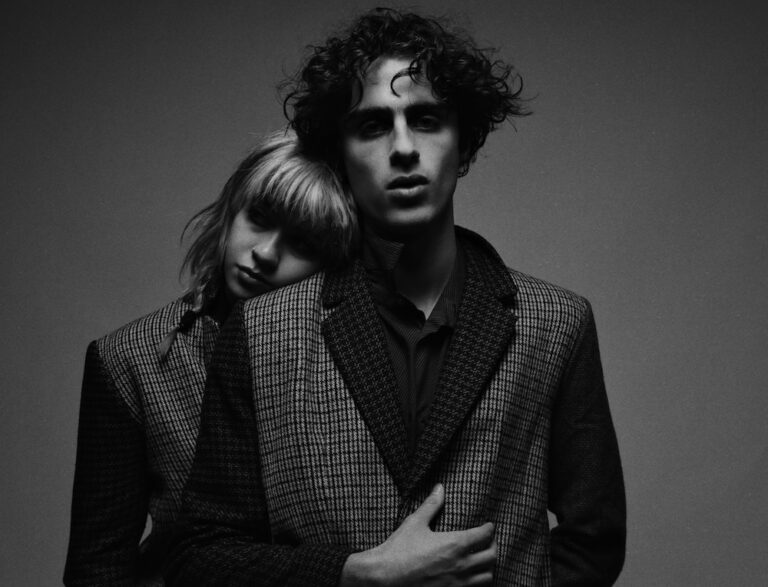 Exploring the Atmosphere with Lowertown

A debut full-length, a sense of self, and a storytelling approach to eletronica? Nobody is doing it like Lowertown.

In 2022, there are more than a fair share of bedroom pop artists and bands hitting the airwaves and filling out Spotify playlists (or Apple Music, if that’s your streaming preference). Few have been revving their engines and shooting lightyears into the future with that sort of sound like Lowertown. They’re similar to your favorite dreamy, space rock acts, but provide a lot more soul – an organic kind that feels raw and real. Lowertown are making feelings and moments fun without losing their heavy handed thoughtfulness and overarching sense of nostalgia. An eclectic, open-minded duo consisting of Olivia Osby and Avsha Weinberg, the band has taken flight thanks to their musical blend of comfort and consciousness; this, of which, has never been so obvious as on their new record, I Love To Lie, and while supporting none other than fellow bedroom pop starlet, beabadoobee. Ahead of the local dates of that tour, we sat down virtually for the pair to talk the creation of “Bucktooth,” making music overseas, and bridging the gap between albums.

I want to talk a little bit about this record. I know it was recorded in London and you’ve done a fair share of recording out that way. How was working over there, especially as an American band with a base in Atlanta? Did that recording process over in London affect the way your album sounds, if at all?

Avsha: It’s definitely impacted it a lot. We’ve been able to see how our music shifted and how what we write shifts as our location changes. A lot of our more aggressive, angrier songs from the record, those were written half in New York and half in London. The more sort of eclectic songs were written there in New York. As we moved to London and started recording, we wrote a little while we were there, and it definitely veered towards sadness again. It was quieter and acoustic, a lot more of an introspective, sort of slow build type. Those songs had a subtle anger rather than the kind of more upbeat angry song. Location definitely just shifts our entire genre that we kind of make or, I guess, the volume that we write in [Laughs].

That makes sense – the folk punk sound balanced with the grunge rock sound. I think the balance is something Lowertown has perfected: this idea of really cool narrative storytelling in the ‘brit rock’ world and the rougher Americana musicality to back that.

Avsha: Thank you, yeah. I definitely feel like it’s our best effort at putting the two together. 100%.

I’m curious if there were any more songs that didn’t make it to this record that you had worked on, were working on, and were interested in. These 11 tracks were cohesive as is, though, so it didn’t need anymore – don’t get me wrong.

Avsha: There is a version of the record with bonus tracks that we may put out with two songs that didn’t really fit with what we were putting together. We might release that later.

There were two big songs – one of them written years ago that was originally Olivia’s that she’d written on her own and we turned it into a duet – and another much more electronic one that is the namesake of the record. The electronic one was written in the studio in London, but it was pushing the genre about it a little bit too much.

Olivia: Like for the album, it just didn’t fit quite right. It’s a really sick song and I think we’ll probably put it out at some point because I think it’s also a good connector to potentially what our music will sound like a little bit. On our older records is electronics that are a lot more heavily involved – synthesizers and stuff like that. This one still has synthesizers on it, on every song, but it’s a lot more acoustic with real instruments and stuff.

Avsha: Yeah, we veered away a little bit from that, but I think reintroducing that back into how we write will be a sort of nice connecting point to our music to come.

It’s exciting to know that there is a song like that that will be coming eventually and we’ll bridge the gap in a way.

Avsha: Hopefully one day on a deluxe edition or something

That would be so thrilling because I adore the way the record was put together – the tracking is timed mesmerizingly.

Olivia: Ah, yay. Thank you. We spent too much time on the track list. Avsha and I are super into micromanaging just about every aspect of our life, our music, and the visual output. When it came to titling the tracks and the track list, we spent… I don’t even know. We spent maybe weeks rearranging it and subtly changing songs around and listening to the whole album as we arranged it saying, “That didn’t make sense. This has too many loud songs in a row. I’m starting to sort of lose it a bit, let’s change it.” We definitely spent way too much time on that and also titling all the songs and making sure the song titles are not dumb or anything [Laughs]. We have notoriously spent weeks on that. We will probably allocate months on smaller aspects of the record production.

The closing two tracks, bleeding into one another, and also “Waltz,” all have such a really amazing dynamic.

Olivia: Thanks, yeah. I really liked the end of that album. I feel like it’s sort of a nice wrap up to all the intensity on it.

Avsha: A lot of the songs were written in a lot of different places and in a lot of different scenarios so we just think it called for a lot of thinking. I think also because you could hear not only auditory changes, but also personal changes between us over the writing of the record, that we had to focus on how we closed it.

What songs are you guys specifically looking forward to taking to the stage and bringing on tour with beabadoobee? There are quite a few that I think could have really, really interesting and vivacious moments in a live setting, like “Scum.” Then again, there is “Antibiotics” which can just rip open the ceiling.

Olivia: [Laughs] We’ve been rehearsing all of them a lot, but I think my favorite one personally to play is probably “Scum” just because the dynamics of that song are so all over the place. It starts out sort of quiet and then the ending when it cuts in and cuts out with all the guitars and everything? I think that’s my favorite part to play. We also just scream a lot on that one and it’s one that is probably gonna be our opener for a lot of the sets that we’re gonna play. I also think it takes people off guard. Like if you’ve never listened to the song or our music, it just sort of gets you eased into this really loud sound that, by the end, you’re sort of in it. I really like that one and I love playing “No Way” just because it’s so long and silly and I can just sort of do a lot of weird vocal inflections in that one. Yeah, those were my two favorites I think.

Avsha: I really like “No Way” because I really like playing the guitar part. Performing it live, it starts to get into droney territory, which is kind of interesting because there’s so much in it that is just not really how I play guitar normally. I’m much more that type that I like hearing individual notes and things changing. I have a very short attention span even when I write. I think it comes out in that song, but the amount of changes ends up turning it into a sort of droney song, which I think is fun.

I also like “At The End” because I get to sing. That one’s awesome. That one’s really, really fun. Liv gets to have her share of moments. She kind of comes on with the guitar and runs around. I run around and look really cool and I get to scream a little bit which makes me feel good. There’s a lot of ups and downs in that song and I really like love when there’s a really big break in a song – and there’s four or five of them in that song. By breaks, too, I mean like it gets really loud all of a sudden and then quiet again.

Those are fantastic choices. People are going to love those here in New York because as you guys definitely know, New York has an energy that cannot be matched.

Avsha: Thank you. I’m really excited to play these live shows for a bunch of New Yorkers. I feel that especially at our release show and in a sweaty bar. I think it’ll be really insane energy. Yeah [Laughs], I’m really excited.

It is exciting, and it’s all encompassing of the overall excitement offered with your sound and style. I think “Bucktooth” was a great example of that. How much time and energy do you guys put into creating the visual aspect of the music, the artwork, even the merchandise and the videos?

Olivia: Thank you. We put a lot of work into the visual aspects of our art. Honestly, it is very important to us and we’re super specific about how people perceive that for music. For that video we got a director who is very outside of our normal style of video. We’re used to using people that are very high production. I would say people who find that it’s more of a contrived story. They would write out treatments and kind of have full scripted things for us. This director, Zev Magasis, that was not his style at all. His style was much more into capturing real life moments and interactions with people so like everything in “Bucktooth” is all real – actual moments and candid reactions. He has such a great eye for things that you would usually just walk past, not even notice, but like he sees beauty in it and was able to capture that really well and yeah.

Avsha: I think that for videos, we focus a lot on them because the visual aspects of the music help people get a full picture. We just think it’s easier to get into bands and to understand the vision of a band when they hit multiple senses. We’ve known that from the beginning and we’ve always been really intense in our visual presence. We definitely work equally as hard on the visual as we on the sound. A lot of our designs, a lot of our merch stuff, is worked on really closely with us. Us and the designers will work really tightly and sometimes Liv will be the designer and she designs a lot of the merchandise. The visuals are really important to me and important for us to be getting the full message of us and our sound across to the listener.

FOR TICKETS TO CATCH LOWERTOWN IN NYC WITH HEADLINER BEABADOOBEE, CLICK HERE!