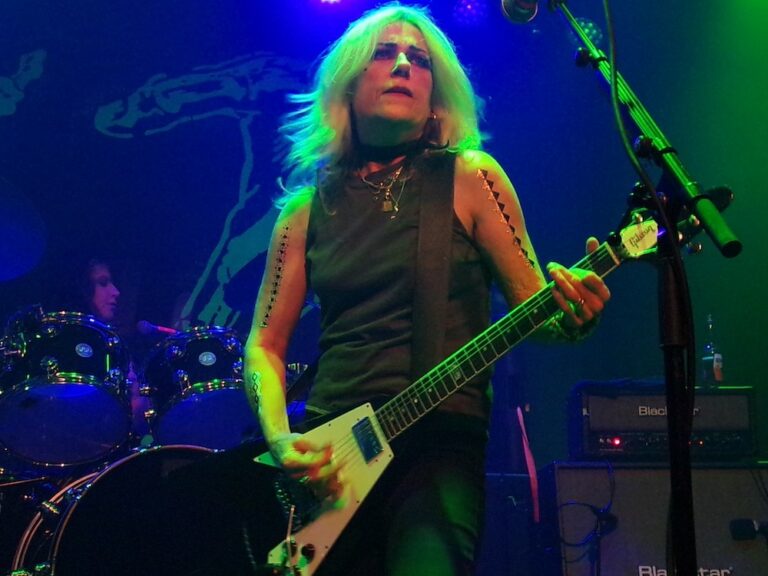 During the late 1980s and early 1990s, L7 was an outlier of both the grunge and riot grrrl movements. Those categories are no longer pertinent. In the 2020s, the band now falls squarely in the broader alternative rock camp.

Founded in 1985 in Los Angeles, California, L7 became an underground phenomenon, peaking in 1992 when MTV and the alternative radio culture latched onto “Pretend We’re Dead” from the band’s third album, Bricks Are Heavy. The band’s popularity slowly waned after that period, leading to an indefinite hiatus starting in 2001. In 2014, the band re-formed in its classic lineup, consisting of vocalists/guitarists Suzi Gardner and Donita Sparks, bassist Jennifer Finch, and drummer Dee Plakas. Since the reunion, L7 has become more of a touring band than a recording band. L7 released six studio albums during the band’s original run and one reunion-era album, Scatter the Rats, was released in 2019. To coincide with the current concert tour, L7 announced a deluxe reissue of Bricks Are Heavy.

L7’s month-long 18-date 2022 concert tour celebrates the 30th anniversary of the Bricks Are Heavy album. The show was designed to play in order all 11 songs from the album, then play an almost equal number of songs from the band’s archives. At Warsaw, L7 performed only two songs, “Fighting the Crave” and “Stadium West,” from its reunion album. The rest of the show was all about reliving L7’s golden days.

Although L7 pre-dated the golden age of grunge, Bricks Are Heavy adopted part of that era’s dominant sound, and it came alive at Warsaw. Melody lines rode waves of chugging low-end guitar hums, with a thick, sludgy bottom driving the speedy rhythms and unrefined vocals giving life to anger and frustration. Lead guitar runs were brief and simple. Gang vocals highlighted the choruses. Arrangements were tight and well-organized. Never mind that on this night L7 flubbed the beginning of “Mr. Integrity” by forgetting a verse and so restarted the song from the beginning.

While the band members spoke of playing two sets, the program actually was one continuous set. The switch at the conclusion of “This Ain’t Pleasure,” the final song from Bricks Are Heavy, was not in the form of an intermission, but simply an instantaneous lowering of an L7 logo backdrop. This second collection of familiar tracks and deep cuts featured two songs from almost every L7 album. The band concluded the evening with a banging cover of David Bowie’s “Suffragette City.”

Part of the charm of L7’s performance was that neither the band nor the music had any slick and polished charm. At Warsaw, the minimalist music was a persistent blunt force. Unlike the recorded works, however, the band members shared amiable anecdotes between every song, making the presentation of both the songs and the musicians more personable and endearing. While Gardner was more stoic on stage, Sparks and especially Finch were visually captivating by liberally flaunting energetic stage dynamics – nothing outrageous, but just enough kinetic action to propel the hard-driving music and engage and animate the audience.

Warsaw tends to book emerging buzz bands, but on this night hosted a band of 50-somethings performing a largely 30-year-old repertoire. Hopefully some of the younger Brooklyn-based musicians were present to learn show dynamics from their precursors.