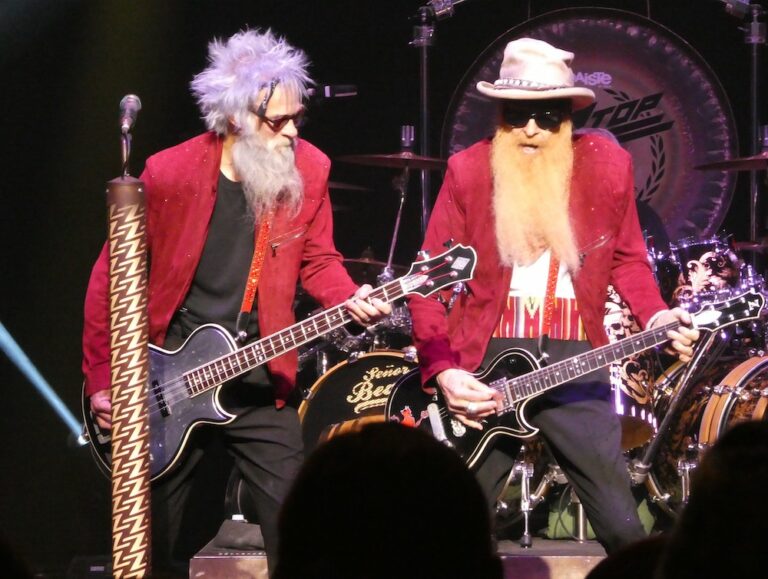 ZZ Top continues to defy the laws of age and time. That Little Ol’ Band from Texas is the longest-running band with an unchanged lineup in the history of popular music. Guitarist Billy Gibbons, bassist Dusty Hill, and drummer Frank Beard played together for 51 years without a breakup or significant hiatus, from 1970 until Hill’s death in 2021.

Peaking in the 1980s, thanks in large part to frequent rotation on MTV, ZZ Top sold an estimated 50 million albums worldwide. The trio has released 15 studio albums, the most recent being La Futura in 2012. The band won three MTV Video Music Awards, and was inducted into the Rock and Roll Hall of Fame in 2004.

Before passing, Hill asked that his technician, Elwood Francis, replace him in ZZ Top so that the band could continue its longevity. Hence, after more than a half century of live performances, a revamped ZZ Top continues raging its blues rock before live audiences. The band’s current tour, which runs through November, is the first to feature the new lineup. The tour coincides with the release of Raw, an album that the band released on July 22. Raw, featuring many of the band’s most popular songs performed live, is essentially the soundtrack to the band’s 2019 documentary, That Little Ol’ Band from Texas.

For years, Francis had been in the wings of the stage attending to Hill. Now he is forefront and looking the part, complimenting Gibbons with his long beard and choreographed steps. Francis mastered the ZZ Top repertoire beforehand and came prepared to improvise on song extensions.

At the Capitol Theatre in Port Chester, ZZ Top launched a 16-song, 75-minute set with “Got Me Under Pressure” from the 1983 diamond-certified album Eliminator. Before long, the band reached back another 10 years with “Waitin’ for the Bus” and “Jesus Left Chicago” from the 1973 album Tres Hombres. The repertoire ranged from the first album with “Brown Sugar” to the most recent album with “I Gotsta Get Paid.” The band drew the bulk of its set from its peak 1980s period, however. There were no new songs because, well, ZZ Top has no new songs.

Sticking to the band’s signature brand of rocking boogie, Gibbons sang appropriately-gruff vocals and wailed on the guitar, playing long and growling leads that referenced the traditions of Delta blues. The playing was serious, but the affect was humorous, with light-hearted lyrics (“Sharp Dressed Man,” “Legs”) and silly sexual innuendos (“Pearl Necklace,” “Tube Snake Boogie,” “La Grange”). Adding to the party spirit, Gibbons and Francis used the furry box-shaped guitar and bass for “Legs” and the bubble machine for “Tube Snake Boogie.” The musicians also wore red sequinned dinner jackets for the final songs.

In essence, even with an altered-line-up, ZZ Top knows what to do on stage to please its audience. ZZ Top’s line-up has a new face, but overall the performance is much as it has been for decades. The band rocks solid music in concert, yet also makes it fun. Hill was laid to rest, but ZZ Top is still tops in rock.