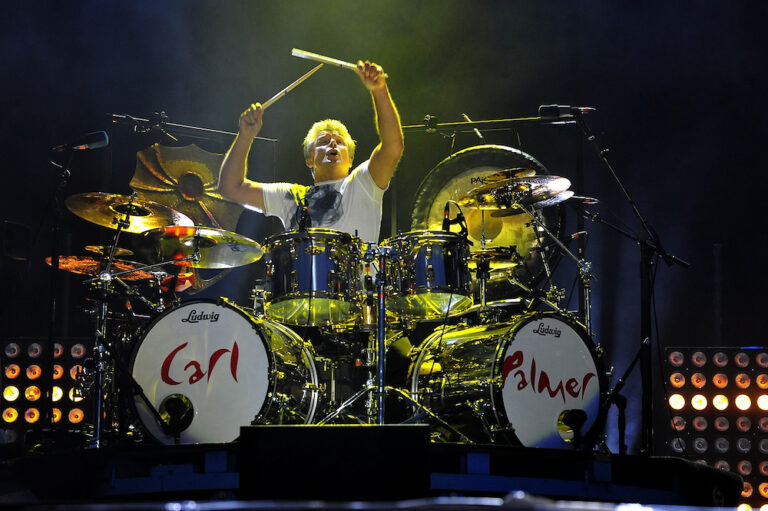 Carl Palmer on the “Most Honest Approach” to ELP in 2022

It turns out that iconic, English progressive rockers Emerson, Lake & Palmer really do put on a show that never ends. In a unique, limited engagement, drummer Carl Palmer will be performing with big screens on each side of him projecting his late band members Keith Emerson (keyboards) and Greg Lake (vocals, bass, and guitar) playing live at a 1992 show at the Royal Albert Hall in London, essentially recreating the concert. Palmer carefully curated the show, searching for the best way to bring his concept of a special and final ELP performance to fruition. It is truly fans’ only way to experience this event. Palmer has said that the tour is one and done.

The trio came together in London in 1970 and turned heads at the prestigious Isle of Wight Festival that same year. ELP landed two Top 10 albums on the Billboard Top 200 chart. “Tarkus,” an ambitious record featuring a 20-minute title track, hit No. 9, in 1971. One year later, “Trilogy” landed at No. 5.

Welcome Back My Friends: The Return of Emerson, Lake & Palmer, includes a stop on November 22 at William Paterson University’s Shea Center for Performing Arts in Wayne, New Jersey. Palmer will perform six songs alongside Emerson and Lake. He’ll also perform additional ELP tracks with his band. The show is meant to be both a treat for longtime fans and an exclusive way to introduce the uninitiated to ELP’s wondrous music and jaw-dropping, emotive technicality. Whereas prog-rock can be an acquired taste, ELP was both a critical and commercial success, selling nearly 50 million albums worldwide. That is a testament to the band’s ability to incorporate melody into its progressive stratosphere, and their astounding live shows.

Fans can also check out ELP’s recently released “Singles” box set. The collection features 12 reproduced 7” singles spanning the band’s career from 1971-1992. We recently spoke with Carl Palmer from across the pond about this, but most importantly, the Welcome Back My Friends. tour

Where did the idea come from to do this very unique show?

It was very, very simple really. It started about two years ago. I started looking at holograms; obviously we all know holograms have got a bit spooky bit of a vibe about them. I went to Canada and visited this company and went through all this stuff and wasn’t convinced. Then I was in L.A., there’s loads of companies there.  I still didn’t think it was the most honest way to portray Greg and Keith by dressing up some actor and superimposing their faces on these people. I didn’t like that. I thought that I can’t rule it out altogether, because maybe this is the way we’ve got to go, so I’ll check out a live concert. I went to a Frank Zappa concert. It was done very well but it still didn’t do it for me. I still felt exactly the same as when I saw Whitney Houston and Ronnie James Dio. It just felt a little bit spooky. It didn’t feel good.

I thought it was time to pass, that there’s not much more we can do, and then I came to the conclusion that the only way you can do this is the most honest way. And the most honest way being you’ve got to find live footage that’s been recorded well and that’s been shot really well. Lo and behold we actually had something like that which we had released; we’d approved it as a band. It was ELP Live at the Royal Albert Hall in London, two nights in a row (the 1992 show was released on CD and DVD). The Royal Albert Hall is one of the most prestigious concert halls you can play in. We did two nights. We had a five-camera shoot both nights and everything was recorded individually and that was the key that got me thinking. We put a DVD together and that was put out in the mid-nineties. It was put out with the record by Sanctuary, who we were singed to. When it went out it was all good and then Sanctuary, within two weeks of the release of this DVD, sold out to Universal and this DVD just got lost in the wash. We sold something like 12,000 copies worldwide, so it wasn’t a lot. I think that was due to the crossover between the two companies. For me that was a godsend, because, to be honest, the less people that have seen it the better it is for me. I got all the recordings, started going through it and I found that this was, number one, the most honest approach because it was Keith and Greg at their very best, looking great, and the sound was superb.

They’d all approved it. All I had to do was sort out what I could reuse again in a concert environment, which would be history in itself, and then drop me in essentially playing live along with them on 12 foot by 10 foot screens on each side of the stage and a bigger screen downstage for vintage footage or to project me on it. This is the most honest approach you could ever take, and I incorporate my band in the show as well.

I managed to get into an editing mode and edit me out mode. Obviously I had to edit me out of it and as much of the crowd as possible because of legal restrictions. I managed to get six songs, possibly the most precious six songs I’ll ever play because this will be the last time you will see ELP actually play together. That’s where we are with it. I got the complete blessing from the Emerson family. His son was very happy and said, “Oh, my dad would love this.” Greg’s wife said, “Please do it.” This is the most honest approach you could ever take and I incorporate my band in the show as well.

What are some of the songs you’ll be playing?

I’ve got “Welcome Back” but only half of the film really works so it starts off with them playing “Welcome Back” and when it gets to the solo my band comes in and takes over quite naturally and then we come back and before you know it I’m playing “Knife-Edge” onstage with Keith and Rick, and then come my band and we’re playing “Hoedown” from “Rodeo Suite.” We’ve got a great version of “Fanfare for the Common Man.” All in all it’s pretty wild. It’s great that I can integrate the two shows now together.

One piece called “Creole Dance” was recorded that night at the Albert Hall. I don’t think it’s ever been on another album besides the live album and DVD. It was a piano solo by Keith. I thought, ‘I’ve got to have it because the music is so good but I can’t just play a video of Keith playing his piano.’ So what I did was arrange some drum parts and some orchestral sounding drum parts to play along with him, which I never did in real life. It’s a little bit special because it’s something that’s never been seen or heard before. I’m looking forward to that.

How did the editing process turn out?

The whole process has taken me nine weeks to do all the editing online and get it all right. I’m looking at seven seconds of “Lucky Man” today that I think we can improve. It’s been a bit of an emotional thing going down that road. I want to be able to pay them back and this is a great way to do it because this is the real ELP. We’ve given it the name, albeit for six songs only, but I say that’s six songs better than nothing.

I would say for the first three days of editing it was emotional. I got through that and as the time went on that kind of wore off and I got down to the job at hand. I had to make this as good as I possibly could. I turned the emotion into a workhouse. That’s not to say when I get into full rehearsal for three days with the full screen that that’s not going to be a little bit emotional, or at the first show.

Will you continue this tour next year?

It’s only 10 shows. We have no inclination to do any more. This is what we want to do. If anything happens in the future so be it, it will be great, but it’s not the priority right now to do that. The priority is to do this the best we possibly can. They would have loved this. They were real techno heads and they just loved technology and this is something really worth doing for them.