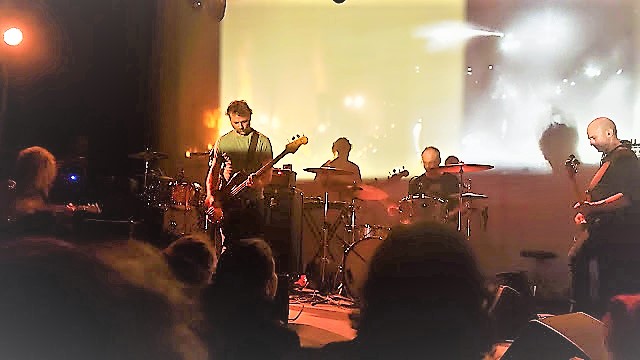 Godspeed You! Black Emperor at Elsewhere on 11/17/22 / Everynight Charley

From the Jay-Z owned Barclays Center to the stage-meets-alley of Brooklyn Bowl, the coveted NYC borough is home to a variety of entertainment venues. One of the latest and greatest in terms of live music? Elsewhere.

At night, this part of Brooklyn appears to be a desolate nowhere. At 599 Johnson Avenue, however, Elsewhere has brought life to an otherwise dead New York City street for the past five years. Formerly a warehouse, like most everything else in the immediate vicinity, Elsewhere is a popular art gallery, event space, music venue, and nightclub in the industrial sector of Bushwick.

The roots of Elsewhere began in the early 2000s in Glasslands, an art gallery and live music club in Williamsburg. That venue closed in 2014. Glassland’s owners, Rami Haykal and Jake Rosenthal, moved their concept deeper into Brooklyn, signing a long lease on a building a few blocks from the Jefferson Street subway station on the L train. Years in the making, Elsewhere opened on Halloween 2017 and celebrates its anniversary every year on that date.

Elsewhere is a 24,000+ square-foot, three-story building with five distinct spaces. The main floor features the Hall, a 1,500-capacity open space hosting live music and disc jockeys. Zone One, a smaller performance space, sits alongside the Hall. In the courtyard, a staircase leads to the Loft, the smallest of the venue’s space, and the Rooftop, a 3,000 square-foot open-air space which opens annually around Memorial Day.

More than an event venue, Elsewhere has become a gathering space for the diverse communities in Bushwick. Elsewhere’s programming is reflective of its communities, ranging from international DJ sets and dancehall icons, to Middle Eastern parties and Asian LGBT+ communities. Elsewhere is a conduit for a more progressive and uplifting culture, elevating collectives like Everyday People and Papi Juice.

In a competitive industry dominated by corporate giants, Elsewhere miraculously has survived as an independent operation. Live music and disc jockeys perform in Elsewhere’s various venues almost nightly. The bookings are diverse, from hip hop and techno to indie pop and art rock. The venue specializes in underground and creative art. Below are a few of the artists who performed at Elsewhere in the past weeks, including Bartees Strange, The Pom Pom Squad, and Pinkshift, respectively.

ELSEWHERE’S CONCERT & EVENT LISTINGS CAN BE FOUND ON THEIR WEBSITE.