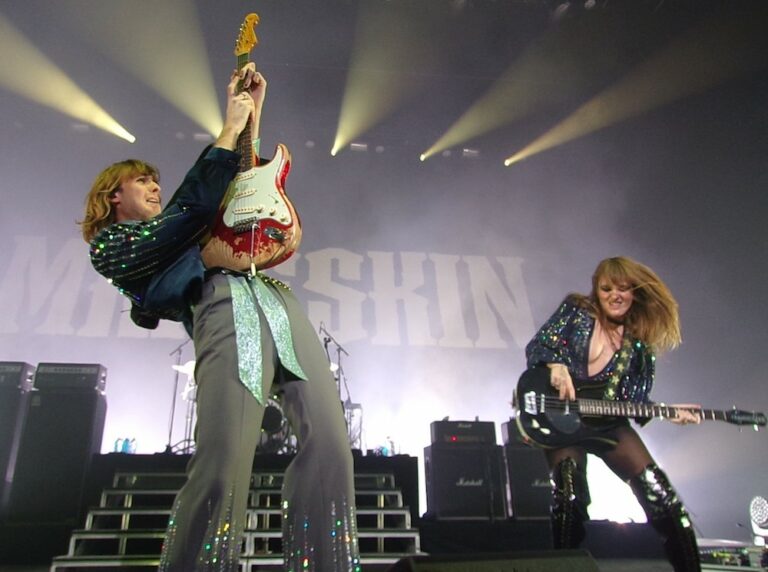 Måneskin at the Hammerstein Ballroom / December 2, 2022

The United States might become the next conquest for Måneskin. The Italian rock quartet already achieved gold, platinum, and diamond sales in Europe, with the current Loud Kids Tour launching its penetration into the American mainstream. Before long, Måneskin may become as huge here as the band is overseas.

Måneskin formed in 2016 in Rome. Vocalist Damiano David, bassist Victoria De Angelis, guitarist Thomas Raggi, and drummer Ethan Torchio launched Måneskin by performing on Roman streets, reaching national fame in 2017 by finishing second in the 11th season of the Italian version of the X Factor television talent show. Måneskin then elevated to international recognition by winning the Eurovision Song Contest 2021 for Italy with the song “Zitti e buoni.” The band has registered an estimated 40 million sales worldwide and will release their third album, Rush!, on January 20, 2023.

Signs of the pending American success are apparent. Before the doors opened at the first of two sold-out nights at the Hammerstein Ballroom, the line of fans wrapped around two New York City blocks. On that line, many parents accompanied their teen offspring; this would be a concert that young rockers could enjoy with their cool dads. A few dozen youth carried homemade placards that they would raise during the concert to deliver their messages to the musicians. In a world overwhelmingly full of redundant pop singers, Måneskin is among the few new artists that are attracting Generation Z youth to the throne of rock and roll.

The concert featured no support act. A little more than an hour after the show was advertised to begin, the venue lights dimmed and Måneskin strutted under flashing lights, looking very much like a glittery glam rock band from the mid-1970s in wardrobe and make-up. With the first song, “Kool Kidz,” from the forthcoming album, the band played to the enthusiastic audience it has courted – youth that want to be the cool kids. The front line of musicians was animated and flashy. Raggi rocked the guitar licks while David constantly encouraged audience response, especially from those pressed against the front barrier. Meanwhile, though most of the audience could not see this, a roadie walked along the photo pit, selecting fans pressed against the barrier for a highly-coveted wristband that later would allow them a stage romp.

The young fans cheered as Måneskin employed a litany of rock star moves on stage. The band even brought the gimmicks into the audience when Raggi raged on his guitar while sitting on David’s shoulder as David took him through the venue floor. As the set came to an end, the opposite happened; members of the audience were ushered onstage to sing and dance while Måneskin closed with “Lividi Sui Gomiti.”

The cool dads in the audience enjoyed the high-energy show as well, because Måneskin’s 18-song set had classic rock roots. The band reworked the Stooges’ “I Wanna Be Your Dog” and the Who’s “My Generation.” Måneskin also covered Lana Del Ray’s “Blue Jeans” and the Four Seasons’ “Beggin’.” (The latter a smash hit single for the band in and of itself.) Much of Måneskin’s original music, whether sung in English or Italian, sounded like it could have been on Aerosmith albums.

Can Måneskin be the band to pass rock music to the next generation? Upon accepting the Eurovision Song Contest award in 2021, David stated, “We just want to say to the whole of Europe, to the whole world, rock and roll never dies!” The American leg of Måneskin’s The Loud Kids Tour is a step in the preservation of rock music in America’s overwhelmingly pop music culture.