ASBURY PARK, NJ—It’s as close to San Francisco that Asbury Park will ever get. Ashbury Park? Too easy.

For Deadheads, the world is divided into two eras: Before and After Jerry. The Grateful Dead was a sociological phenomenon as much as a band, and with Garcia’s death in 1995, a yawning chasm opened which the entire Jam Band genre tried to fill. Different configurations of ex-members, The Other Ones, Ratdog and The Dead have toured sporadically. Now, Bob Weir and Phil Lesh are giving it another go, calling the group “Furthur.” The response of a few shows at small venues had led to a more expansive tour at larger venues, showing how powerful and popular Dead things remain. 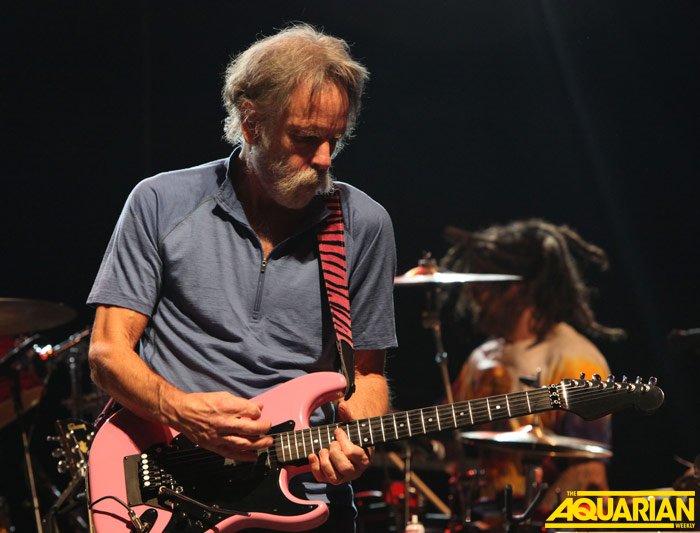 The Convention Hall was an oddly perfect setting for two shows on this December weekend: decaying structure, funky amenities, and bad acoustics oozed nostalgia. If “Fillmore-esque” hasn’t been used yet, well, there it is. An old hall for old music. The huge holiday tree and lights and decorations outside the Hall, really added to the open air market meets carnival vibe that were the hallmarks of old Dead shows.

Outside, it looked like a the last 30 years never happened. An awesomely cliched group of Freaks, pun absolutely intended, showed up from everywhere. This was not the crowd that auditioned for the MTV’s Jersey Shore. Ticket and t-shirt hawking, musicians jamming, sellers selling, anything for a ticket. Inside, the booze flowed and the smoke smoked, the tapers were taping even though there is no tape, and for a little while, it felt quite a bit like an old Grateful Dead show. I doubt much of this would be allowed around a sterile 2009 casino venue. Doubtful. Score one for the fans. Asbury Park is nothing if not Bohemian. This was the place for old school Dead style partying.

The band played two sets with a 60 minute intermission. It may have been needed for the fans to empty and refill themselves, but still, an hour-long intermission is not too long—it’s way too long.

Bobby, Phil and band looked and sounded great; the ocean of humanity did have one positive effect in dampening the echo in the box-o-reverb that the Hall is. Amazing guitar and bass work by Weir and Lesh, along with John Kadlecik, who worked Jerry’s vocal and guitar chores as a member of Dark Star Orchestra. The shows may not have the energy, peaks and valleys of past Grateful Dead shows, but Bobby and Phil are now in their 60s, playing music from a band that’s been around since 1965. From the audiences’ reaction, they’re doing just fine.

The set lists are a Dead fans wet dream. Time and again you are reminded just how good these songs are, and that while this band has extended jams, this is not a jam band. The first of two shows had the band showcasing “Friend Of The Devil,” “One More Saturday Night” and “Wharf Rat.” The second night was an even stronger showcase featuring “I Need A Miracle,” “Estimated Prophet” and the epic “Terrapin Station,” closing out the weekend with “U.S. Blues.” The masses filed out into the cold December air to get to where they were going, or at least back to the Wonder Bar, and the beginning was the end.

The band mentioned Furthur is also a foundation that provides grants for studying environmental issues and funds for assisting those in need in the San Francisco Bay area. Info is at furthur.org.