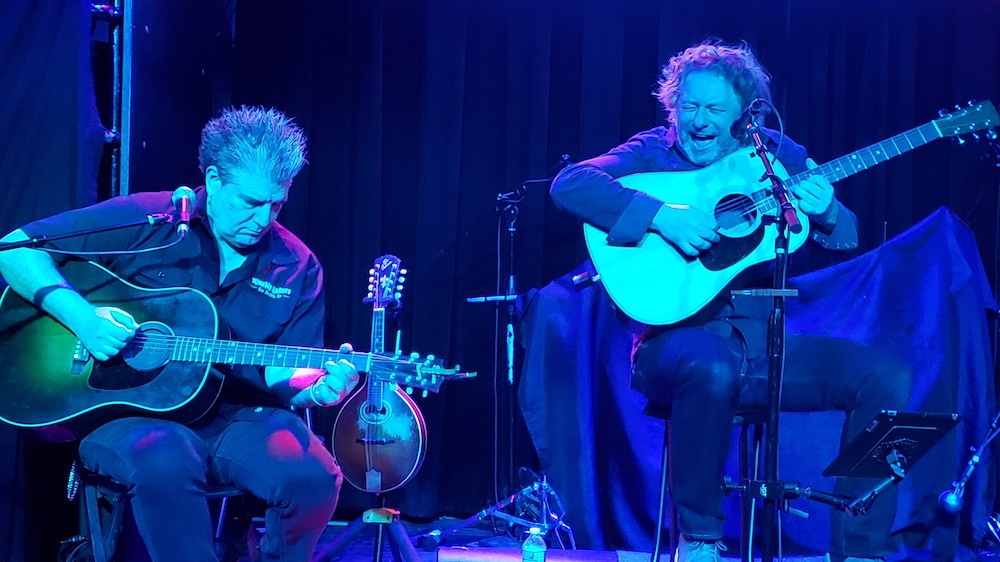 At larger venues, like his recent performances at City Winery NY, James Maddock fronts a full electric band. At smaller dates, including tonight at the Bowery Electric, Maddock often sings and plays acoustic guitar with just David Immerglück of Counting Crows on guitar and mandolin as accompaniment. The ambience of these shows, dubbed the “Jimmy and Immy” concerts, bring Maddock’s songs under a starkly different prism.

Maddock is a prolific songwriter. After parting ways with his early bands, Fire Next Time and Wood, he recorded his debut solo album in 1982, while still living in his native England. Since relocating to New York City in 2003, he has recorded seven studio albums and one EP, reprising many of these songs on three live albums. Under the deep blue stage lights of the Bowery Electric, he drew from many of these collections for an audience of about 35 of his most faithful local fans.

Singing through a raspy, rusty voice, Maddock sang perceptive vignettes that painted ordinary people making common decisions to the best of their abilities, while also peaking under the covers at the struggles of the journey therein. In this simple acoustic setting, the characters in his stories seemed even more vulnerable and conflicted, and ultimately made them more engaging. Almost all of the lyrics were wrapped in hope and beauty, allowing the listener to exhale peacefully. Throughout the 90-minute set, every song seemed like it was his best song.

Immerglück was a valuable player, striking stinging melody lines on his guitar and mandolin. His subtle contributions tastefully understated and bridged Maddock’s vocal parts. On other nights, Maddock’s band offers a rocking context for his songs and draws larger audiences, but these simpler Jimmy and Immy shows unmask the brilliance of Maddock’s work in a far richer format.