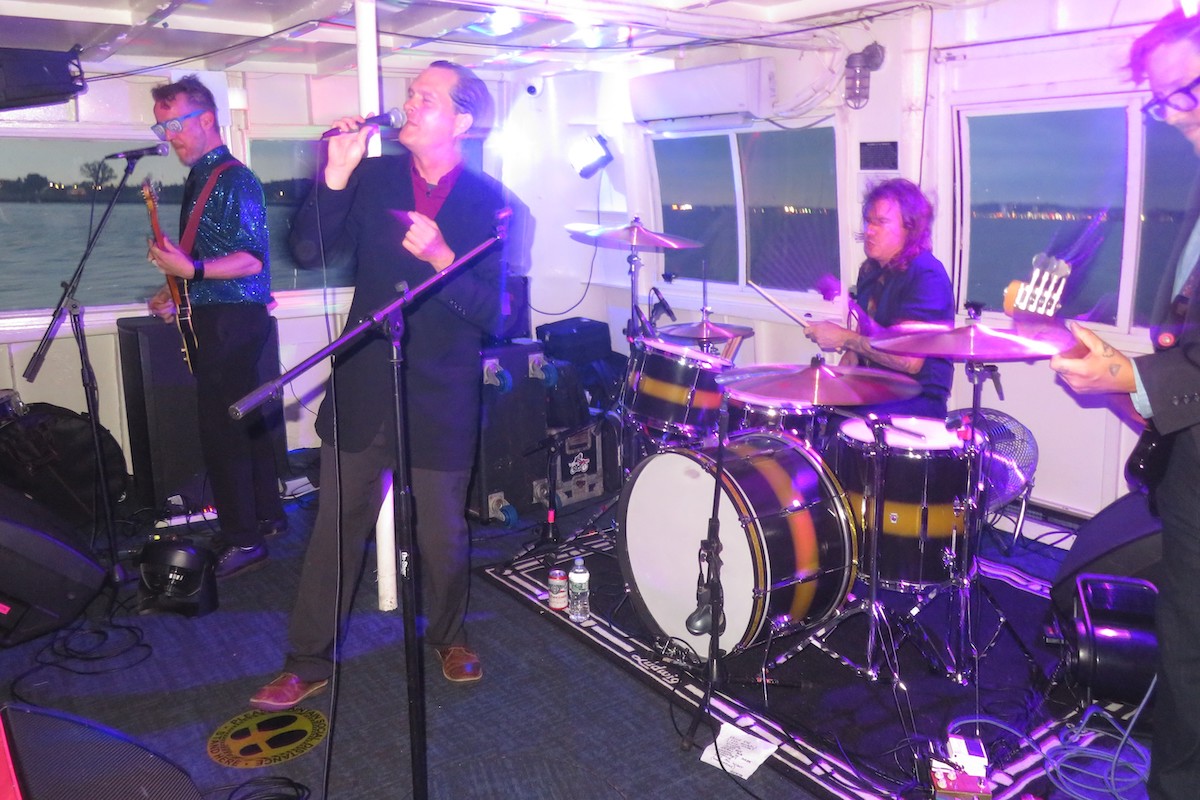 Blinding bolts of lightning flashed in the dark and cloudy horizon behind the Statue of Liberty, yet only scattered drops of rain fell on the upper deck of the Cosmo in New York Harbor. Underneath the outdoor deck, protected from the elements, Electric Six was preparing the front of the inner deck for the staging of a concert. Ironically, the boat was already rocking and rolling fiercely due to the turbulent waters.

With no real stage, the dividing line between Electric Six and the audience was suggested by wires on the floor connecting the band’s monitors to the sound board. This meant that the musicians and the front row of fans stood face to face, at a courteous distance of perhaps 18 inches. Fortunately, the boat rocked side to side. If the boat had rocked front and back, the fans and musicians would have toppled each other with every big wave. Musicians and fans occasionally reached for the overhead beams to stop from tipping with the waves. Moving through the cabin, though, tested everyone’s equilibrium and sometimes required the assistance of those standing still.

One of the members of Electric Six missed the boat. Literally. On this night, Electric Six performed as Electric Five. The musicians were vocalist Dick Valentine, guitarists Tait Nucleus and White Wolf, bassist Herb S. Flavorings, and drummer Dr. J. There was no power shortage, however. The quintet came with plenty of electricity.

“The band has done shows as a five piece on several occasions,” the band later explained to The Manhattan Beat. “This is the first entire tour we have done as a five piece. We have a member of the band who needed time off. When he is ready to go out on the road again, we will gladly have him!”

Electric Six brought the fun along with the funk. Even the titles to the first two songs, “Mr. Woman” and “Bride of the Devil,” demonstrated that this was the launching of a rock and roll party. Song after song, Electric Six took a hook and, through repetition, turned it into a deep rock or funk dance groove. Vocalist Dick Valentine animated the celebration with his light-hearted spirit and exaggerated gestures, even when his louder bandmates overpowered his singing. The front line of fans, including one who flew in from Canada, sang along to almost every silly lyric. Electric Six has released 17 albums in about as many years. The 2003 debut, Fire, which contained “Danger! High Voltage” and “Gay Bar,” is still the band’s largest-selling album. Perhaps the band’s popularity stagnated because the musical formula has remained static over the years. Notwithstanding, that formula was strong enough to keep this rock and roll cruise afloat.