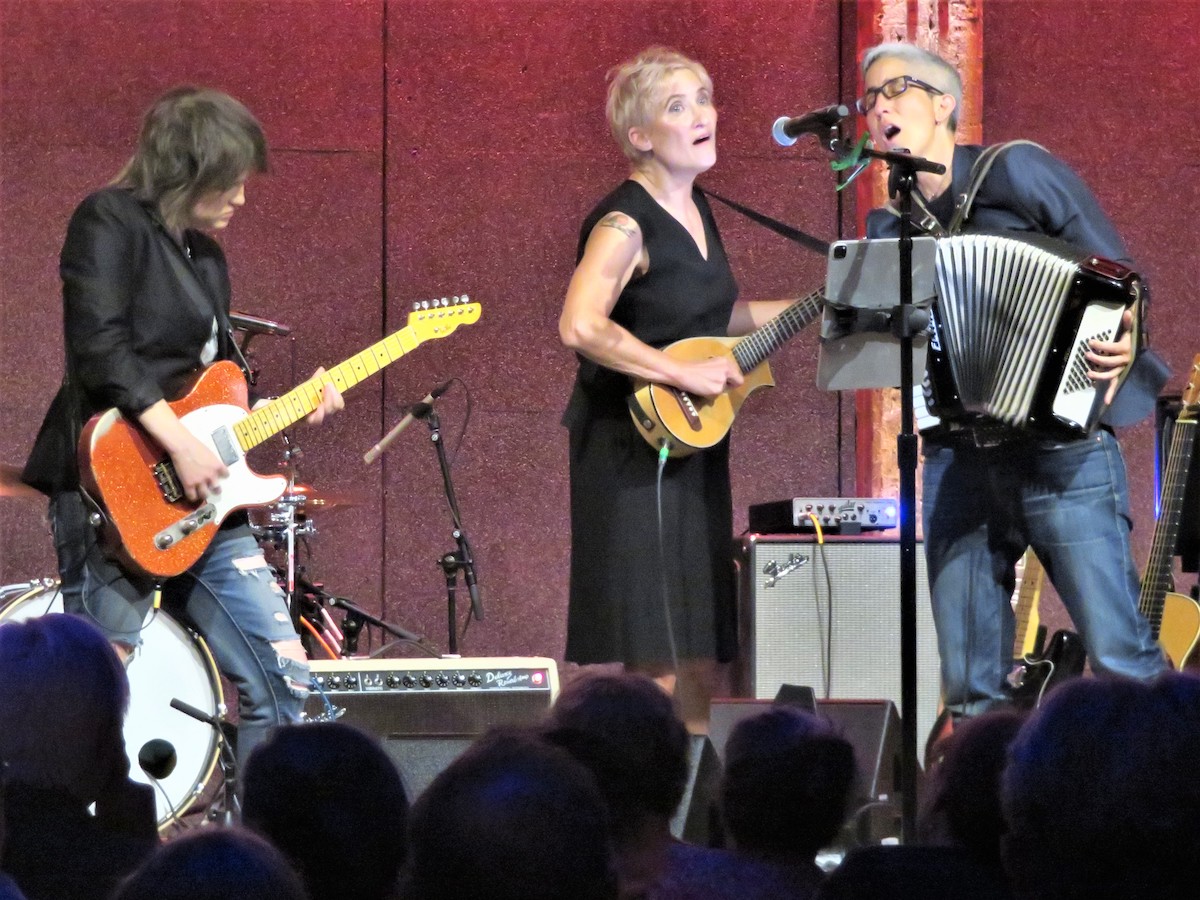 Musicians who hit with a novelty song spend the rest of their lives proving they are more than a one-hit wonder. Jill Sobule, for example, generated curiosity in 1995 for her moderate hit, “I Kissed a Girl.” In 2006, Katy Perry had a huge hit with a different song that shared the same title. Sobule was no longer the “I Kissed a Girl” girl. While none of Sobule’s subsequent recordings achieved the same degree of attention, she cultivated a devoted following that has supported her through her next 10 albums and frequent concert tours.

Sobule began her performance at City Winery NYC on July 15 by carrying an acoustic guitar through the audience to the center of the room, trailed by her guitarist, Alex Nolan, and her accordionist, Julie Wolfe. Sobule then climbed onto a chair and sang her first two lighthearted songs up close and personal without a microphone or amplification for her acoustic guitar. Her two musicians below her accompanied her. The audience, many of whom were still being seated, hushed during the songs and then exploded with thunderous approval at the end of each song.

Ascending to the stage and its amplification, Sobule became chatty, sharing amusing anecdotes and somewhat confusing her musicians by playing songs that were not on their prepared set list. The show in general was like that, kind of free-wheeling and cheery. Sobule exhibited wit not only in her stories but also in the clever lyrics to many of her songs. Even a series of sad songs were so skillfully worded that the lyrics were more intriguing than sorrowful. Her guitarist and her accordionist/pianist added fluid melodies where appropriate to elevate and beautify the arrangements of some of the most bittersweet songs.

Towards the end of the show, Sobule introduced two more musicians, Matthew Schneider on electric bass and Kristin Henderson on drums. Adding a rhythm section to the formula transformed Sobule from a folk-style singer/songwriter to a rocker. She closed that part of the set by leading the full band in a cover of David Bowie’s “All the Young Dudes.” Exhausting their rehearsed repertoire, Sobule concluded by returning to solo work with her acoustic guitar.

Sobule did not perform “I Kissed a Girl.” There was no need. She had already proved her musical worth to her audience.