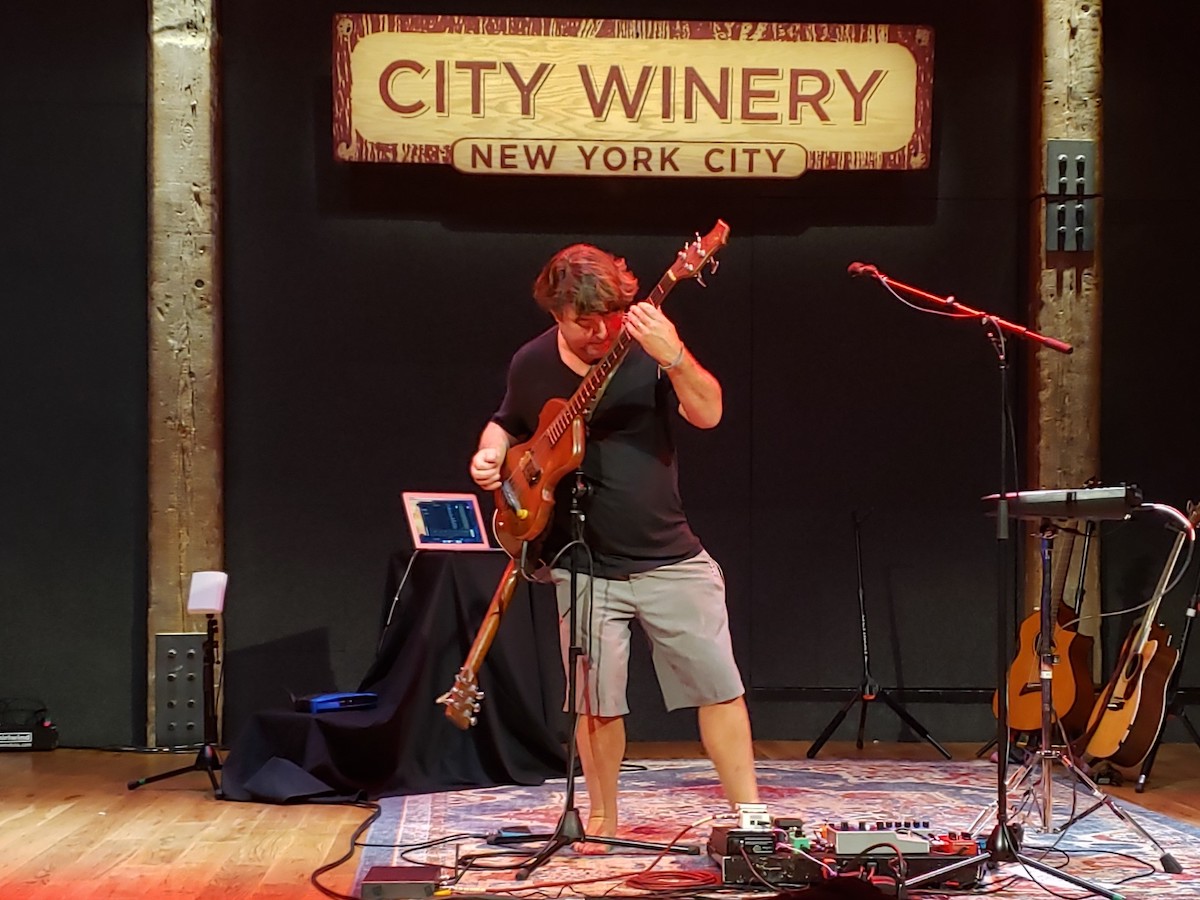 Keller Williams is a solo artist who on stage morphs into a one-man band. At City Winery NYC on July 16, he walked on stage with just an acoustic guitar strapped across his back. In a matter of a few seconds, however, he would be surrounded by rolling waves of dense sound. On his right, a bass guitar stood perched on a stand. On his left at waist level was an electronic pad on which Keller could tap percussion and keyboard sounds. Behind him, a laptop laid ready to provide pre-programmed rhythm tracks. At his bare feet, Keller prepared an array of pedals and effects for looping and distortion. Although Keller appeared to be alone on stage, he soon would be accompanied by a synthetic orchestra.

Williams has a history of playing in bands and collaborating with his musical idols, including Bob Weir of the Grateful Dead, bassist Victor Wooten, banjo player Bela Fleck, and several veteran bluegrass bands. His solo performance, however, did not easily allow room for teamwork, with Williams improvising inventive layers of loops as his accompaniment. Even while singing into his microphone and combining simultaneously both picking and strumming on his guitar, he seemed to be planning his next addition – a bass, keyboard or percussion loop he will add to the song structure.

Williams did all this at City Winery NYC. Williams’ musical inclinations were informed by and rooted in several rural American styles, especially vintage folk and bluegrass, but also by alternative rock, jazz and experimental music. At times Williams appeared to be more of a musical scientist than an entertainer.

Williams has been a Dead head since he was 17 years old (he is now 51), so it was appropriate for him to cover the Grateful Dead’s “Cumberland Blues” midway during his set. Except for the chorus and melody line, Keller created a unique arrangement for the song. Bits of other songs also were given distinct treatments.

Granted, not every move that Williams engineered was a success. The sound occasionally grew muddy for seemingly lengthy periods. From time to time, the effects made his music sound like an extended club mix of a song that packaged tighter might have been more effective. At moments like this, it was Williams’ animated personality that commanded the spotlight rather than the compositions themselves.

Williams is a prolific musician, having released 28 albums in his 27-year career as a recording artist. That is an extensive catalogue to bring to a live performance. That wealth of material, plus all his improvisational work on stage, guarantees that no two Keller Williams concerts will ever be the same.