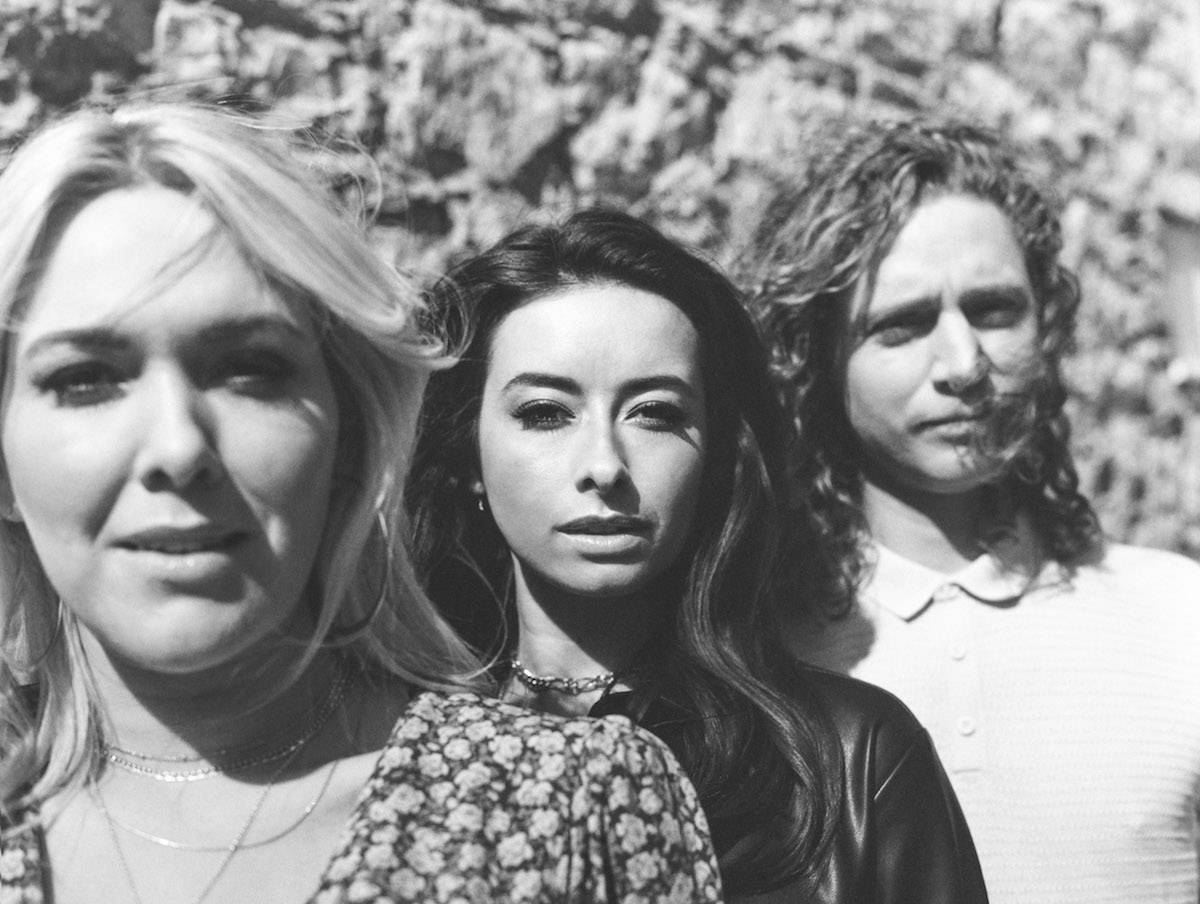 The Wandering Hearts on Their Emotionally-Charged, Luck-Filled Journey to Album Number Two

It’s been one week since The Wandering Hearts’ sophomore record reaches the masses, but it feel like it’s been part of us forever.

You see, the gratifying and enchanting musicianship that this trio simply exudes is all encompassing. Every single song on this hypnotizing 12-track album served up hot with a side of intricately-crafted harmonies and irrepressible nostalgia. The self-titled album is striking from the very start with “Hammer Falls,” but twists and turns in the most alluring and shockingly buoyant manner until it’s closer, the aptly titled “Lullaby.”

The Wandering Hearts’ fresh, overseas take on authentic Americana tunes makes for a wonderfully memorable listen – one that, even in this day and age, is upbeat, sanguine, and soul-stirring. The UK-natives that make up the threesome, AJ Dean Revington, Chess Whiffin, and Tara Wilcox, are reflective musicians whose goal is not to simply make music and create art, but evoke emotion and depict passion. These three are storytellers rooted in the classics, artists based in love, and people plainly made to bring joy to the hearts of music lovers everywhere. As a band, there is a effortlessly build up to their career, but also as musicians, for their soundscapes stem off one another in the most fulfilling way. Cohesive and stunning and nostalgic and new, The Wandering Hearts’ second album, out now, is a whole package, made complete by the three creatives behind it’s melodic magic.

It’s hard to brush off such talent and skill, but even more so when a band is so clearly the breath of fresh air we need right now. Chatting with the group to discuss all things sophomore record and immersive folk-rock-indie-pop-country-narratives only makes you (AKA us) even more fond of the rising Americana stars and their imagery-laden, harmony-loaded songs filling out their ever-evolving catalog.

There are so many layers to the music you make. It’s hypnotizing and mindboggling in the most wonderful way to pick out all the bits of instrumentation and hints of influence. How do you pinpoint your sound or style, if at all? Do you go in with this idea in mind that you are this edgy pop Americana band or is that simply the music that comes out of you all?

Thank you. It’s a real genuine mix of all our influences coming together. We have never tried to be anything specific, it is just the music that we make together. Although, we purposely don’t want to pigeonhole ourselves, as other people will do that for you. We definitely don’t think of ourselves as ‘edgy’!

Now I know that the Grand Ole Opry has played quite the role in your career in such a meaningful way. Can you tell us a bit about the venue, your serendipitous and history-making time there, and its impact on you all?

The Opry has always had such a huge draw as the historic institution it is, as well as all the heroes of ours that have played within the circle. AJ had visited Nashville a couple of years before and went to a show at the Opry and thought, “I have to play here one day.” He obviously didn’t know the break that was going to come our way in the form of Marty Stuart and his incredible invitation soon after. We have played at the Grand Ole Opry a few times now and it has felt similarly magical each time. Everyone there makes you feel so welcome and at home and each turn finds you surrounded by more and more memories and stories of the greats. The whole place, the staff and all the incredible parts of that machine make it what it is – like a living, breathing museum that holds music in the highest regard possible. That trip and those shows were undoubtedly a massive turning point for all of us.

This new album of yours was recorded in Woodstock, which of course has a ton of history to dive into, but especially within the folksy genre. What was that experience like? How did the recording process in Woodstock shape this album?

Recording in Woodstock definitely had a big impact on the shape of the album. We approached the process and the trip confidently, as we had all of our songs finished in our minds, but actually being in the recording mindset was a different kettle of fish altogether. Obviously, working with great producers like Simone and David opened up more veins into the work and helped us find more avenues with which to explore. We had a music room at our house which became an invaluable asset for playing through songs ahead of recording and reimagining them late at night. We even played a couple of shows in town which gave us a feel of how the new music would go down in front of an audience!

The first single you guys released ahead of this record was “Gold.” This song is a gritty, beautiful, and passionate Americana track filled to the brim with harmony and heart. Why was this the song chosen to lead the new era of The Wandering Hearts and this sophomore record?

When we wrote “Gold” we wanted to try to find the words that we felt we needed to hear ourselves. It was in the midst of a pretty difficult time for us all, so exploring the concept of Kintsugi as a metaphorical celebration of finding our own strength seemed such a great fit. It encapsulated our mindset at the time and still stands for our belief that our traumas, injuries and struggles make us stronger.

“Gold,” while on the topic, sort of set the stage for an album created predominantly from the ground up during the pandemic. Was there an obvious effect or shift on the Wandering Hearts artistry due to the state of the world?

We actually managed to get the album recorded just as the pandemic really hit, so in terms of artistry, it wasn’t impacted at all. But what has been really interesting to us is the fact that a ton of the songs have taken on new meanings post-pandemic. “Gold” and “On Our Way” in particular were written when we were collectively dealing with a lot of big stuff, but singing them together recently, after so much time apart, they resonated in a totally different way. It was really emotional.

You guys paint all these lovely poignant pictures with your music and this new LP is set to be no different. In your own eyes, what do you hope fans and music lovers alike take away from this robust and rousing record?

Well, firstly, thank you for saying such nice things. We are honestly just so excited that people are hearing this record and it’s resonating with them. We hope that it gives people a bit of hope. We turned to music a lot during lockdown and it got us through some tough times. The throughline of this album is one of hope, resilience, vulnerability, and looking out for one another, so if this can give people some kind of relief from everything, then that’s a pretty special thing. Acoustically, we were really inspired by the music we listened to growing up, from Fleetwood Mac and Simon & Garfunkel to Joni Mitchell and The Mamas and The Papas, so if there is a little nostalgia to be had, we hope you enjoy it.

You’ve had immense success over the course of your career, over the last few years, but especially in the past few months. While it is deserving, the timing is surprising given the circumstances. What do you look forward to most about a bit more normalcy coming back and this newfound, largescale, dedicated fandom coming out of the woodwork to see you all and appreciate your sound?

Without question, just getting to play music again is the dream. That’s been the hardest part of the past 18 months for us. We love writing songs and it’s been great to spend time with our families and have some downtime after a busy few years, but playing for an audience again and being able to say thank you for all the unwavering support will be the most incredible thing…. Not to mention watching other musicians play – we’ve so missed gigs!

For us, each song of yours feels like a whole new world. What comes first, the rhythm and beats or the lyrics and storytelling? All of it is done to perfection, but is there a method that you all have?

Each song is entirely different. We don’t have one method and we get inspired by lots of different things. “Gold” was inspired by a gift Tara was given that was inscribed with the Japanese word ‘Kinsugi’ meaning something that is stronger and more beautiful for having been broken. “Dolores” was written after Chess read an article about Dolores O’Riordan and needed to talk about how it had affected her. “Tell Me When I Wake Up” came after AJ stayed up drinking ’til the very early hours of the morning with our friend Robin Howe and they started jamming. It wasn’t until the next morning when he found the drunken voice note he realised there was pretty cool song there.

However the song starts, it always comes down to the three of us to sit with it and work on it until we’re all really happy with how it’s sounding. It takes time, but we’re really proud of how we work and what we’re doing. We know how lucky we are.