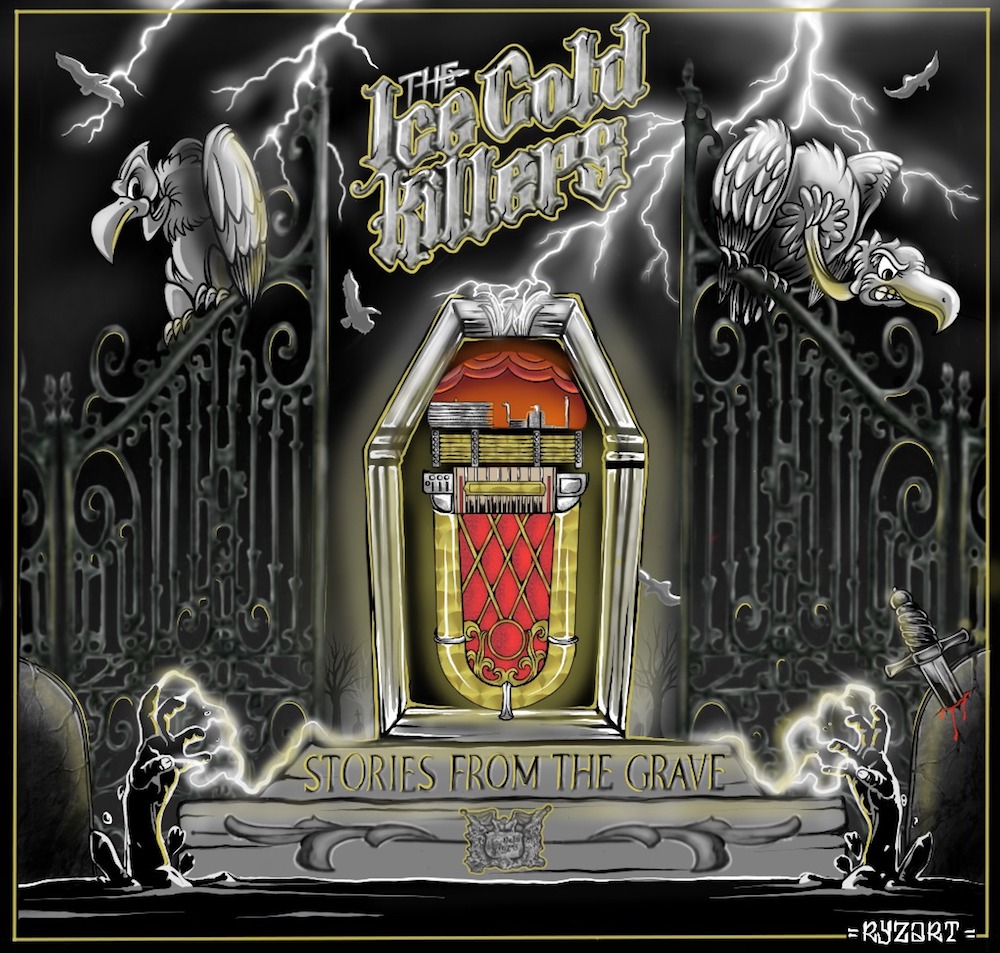 It is fairly well known in the entertainment industry that sequels to beloved movies are rarely as good, let alone better, than the original film. The same goes for spin-off series based on revered television programs – they are notoriously not as well-recieved as the show it stems from. With music, though, the outcome is often a bit better. Artists and bands that follow up a truly cherished and well-respected piece of work with another release largely have more success and growth than in other facets of art and culture. A prime example is The Ice Cold Killers.

The New York rockers released their sophomore album today, August 27. This record, aptly titled Stories from the Grave, is surprisingly soulful and remarkably charming for it being no more and no less than one mind-blowing and face-melting song after another. It’s an evident step up from their last record, too, Laughin’ with Sinners… Cryin’ with Saints.

That is what The Ice Cold Killers do best, though, as an on-the-rise, lustrous punk rock group. Overwhelmingly sensational qualities relating to industrial metal instrumentation and semi lo-fi progressive vocal tones round out this record. It precisely elevates the gritty, unrefined stylings of this band. Rock and roll is clearly in the blood of the four multi-talented musicians that make up these NY rockers. The hardened quartet use the general basis for the genre as the foundation for what they make. While a casual listener of The Ice Cold Killers may not realize it, there are only two guitars, one bass, and a set of drums creating these earth-shattering and room-filling tracks. The foursome layer beats, riffs, and lyrics to shape punk into something that can be relevant and dynamic in 2021.

Every single one of the 10 songs on Stories from the Grave have an immense energy that is simply indescribable. It’s hard to tell if the energy comes from the musicality at hand, making you want to get on your feet and mosh like it’s the eighties and you’re at CBGB’s, or if it’s because of the chilling, yet truthful storytelling that is underscored by said muscaility.

Simply looking at one of the singles from this album, “You’re Dead To Me,” there is a narrative being discussed that doesn’t even need to be well-rounded to make its point – although it is and it does. We’re living in a world where life is far from permanent and everyday is unexpected. Raw and invigorated with that message, as well as the feelings of anger and anguish, The Ice Cold Killers crafted “You’re Dead To Me.” Society says it’s alright to cut off toxic people from your life as a form of self care, so what this band did is show the evolution of that concept through song.

People might be dead to you and that’s a tough pill to swallow, but if it’s for the best… it’s for the best. Then the band set this to Ramones-esque music, making it even better and almost a more appreciated form of self care. High octane guitars, a thumping bass, and uptempo angst shines a light on the truth about being yourself and surviving in this temperamental, stressful world.

It’s almost rare to see a band be so forthright with the emotion and grit laced into their songwriting these days. Life is short and people are sensitive. There is suffering and division, heartache and vengeance. That is modern life for you. The Ice Cold Killers are this vintage anomaly, though, where their wisdom and age (and their classic influences) give them a leg up in this overtly responsive social climate. They are saying what they need to say, screaming what they need to scream about, and creating whole albums that bring back this once adored wave of Dead Kennedys style inflection, RKL-inspired honesty, and Clash-like punk rock.

The vocal performances are unironically smooth and yet still heavy in terms of the depth the words carry and the practically melody-less production. It seems that the mixing and mastering of this sophomore release creates a professional atmosphere for a garage-like band. This album is very much conducted in a way where the songs flow together one after another and still individually stand on their own as fighting words and battle cries. Almost too dramatic runs on electric guitars shape these grunge meets punk soundscapes, which are, in fact, entertaining and unrestrained.

Although stimulating, at times these songs can feel a bit much, like nails on a blackboard except done through shredding on an instrument. It’s not cringe-worthy. It is just intense and possibly the most enjoyable in a predominantly live setting. Not every song and album by any artist on the market is made solely for the purpose of listening through headphones and streaming on one of the various digital platforms out there today. The Ice Cold Killers are sonically sound and rip-roaring and this latest record is just one example of that.

However, a big part of what makes their music so enticing is how rousing it is vocally and instrumentatlly. You hear a song like “I’ll Only Dance With Death” or “War Horse” [Tracks two and eight respectively] and are immediately brought back to the nardcore world of 1980s False Confession and even the more mainstream frills of early nineties Sublime – two groups who killed it in a concert setting. Concurrently, you also have the closing number, “Killer On The Loose,” which could almost too easily be slipped into the tracking of Guns N’ Roses’ Use Your Illusion I or II as softer, more harmonious song, but still rough around the edges in a nostalgic, heart-tugging way.

That closing number, as well as “Insomniac” and “We Are The Enemy,” are set to be fan favorites off the second Ice Cold Killers album. The independent punk rock band with a vintage leg up on the rock and roll competition and a variety of instrumental and production abilities did hit the nail on the head with Stories from the Grave. We know that for certain. It’s an album meant to be heard in person while out at a club with the band on stage being as intense, driven, sweaty, politically exasperated, abrasive, and (clearly) masterful as they are. Coming off of their debut LP, 2018’s Laughin’ with Sinners… Cryin’ with Saints, the heavy, rowdy, fun, and reflective Stories from the Grave is next level, setting a grand stage for what’s to come from the self-proclaimed slayers of rock.

THE ICE COLD KILLERS’ STORIES FROM THE GRAVE IS OUT NOW ON ALL STREAMING PLATFORMS! KEEP UP WITH THE BAND BY CHECKING OUT THEIR WEBSITE!