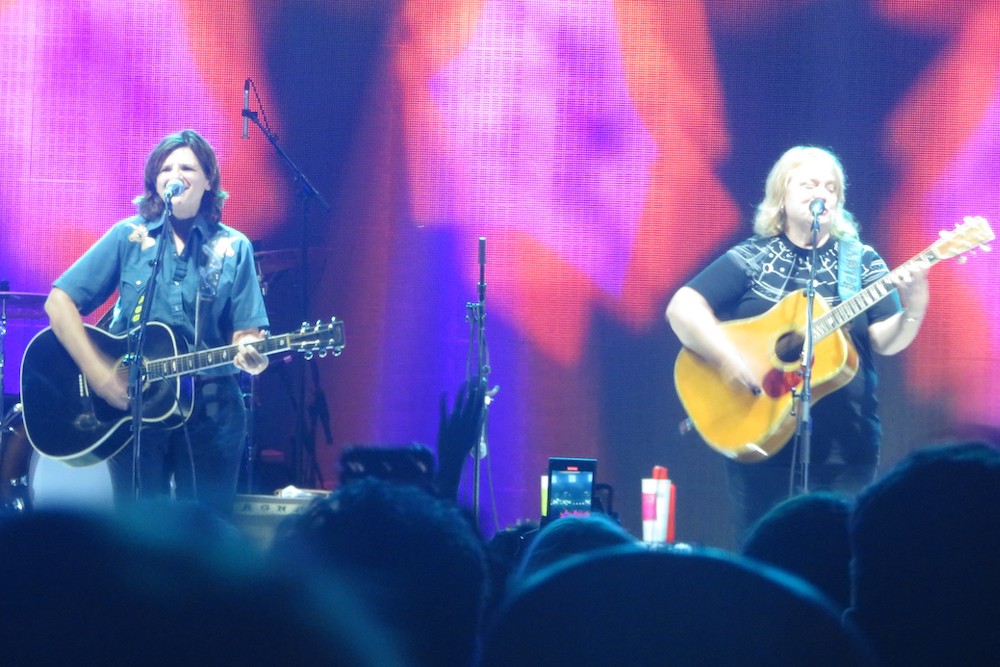 Despite being fully vaccinated against COVID-19, Emily Saliers of Indigo Girls was diagnosed with COVID-19 in August after attending a writer’s workshop. This led to a two-week quarantine and several postponed and canceled concerts. About the same time, Indigo Girls’ guitar tech contracted COVID and unwittingly infected another crew member.

Indigo Girls announced online the postponement or cancellation of several late August and early September concerts. The band cited the reason for these actions as due to “an abundance of caution and concern for the safety of the band, crew and most importantly our fans.” Neither Indigo Girls nor its management specified at that time that anyone had been infected.

The shows must go on, however. Recovered and perhaps now doubly immune, Saliers rebounded from her quarantine by once again climbing aboard the tour bus. Amy Ray, the other half of the duo, who also is vaccinated, made a personal decision on the side of caution. Ray is driving herself to many of the concerts in an effort to avoid contagion. In ongoing safety measures, Indigo Girls and the road crew reportedly are doing rapid tests daily and PCR tests every third day.

Indigo Girls have been labeled a folk rock band, and that seemed to apply at SummerStage in Central Park, with most of the musical instruments being acoustic, albeit with amplification. In actuality, the songs had a more diverse range of sources, including country, blues, and rock, yet Ray and Saliers established that primarily they are singer-songwriters. Known to write independently for the most part, their paralleled lyrical reflections on life and commentaries on contemporary society bonded them to each other and to their audience.

Indigo Girls had a string of gold and platinum albums from 1987 to 1997, and most of the live repertoire came from these more commercially successful years. The set also included three songs from Look Long, the duo’s 15th and most recent studio album, released during the pandemic in May 2020, and one song from the previous album, 2015’s One Lost Day, as well as a few cover tunes. Indigo Girls played for an hour and, following a brief set change, Ani DiFranco and her two musicians, who received a rousing response earlier in the evening with their own hour-long set, joined Saliers, Ray, backing vocalist Lucy Wainwright Roche, and violinist Lyris Hung onstage for a four-song encore. The ensemble performed John Prine’s “Angel From Montgomery,” DiFranco’s “Which Side Are You on?,” Ray’s “Tear It Down,” and “Closer to Fine,” Indigo Girls’ best known song.

At SummerStage in Central Park, where all in attendance, including employees and volunteers, had to show proof of vaccination in order to enter the premises, Indigo Girls showed no evidence of residual COVID complications. Saliers and Ray seemed at the peak of their strength and even bolstered each other throughout the performance. Their trademark vocal harmonies were as powerful as ever. Wainwright Roche and Hung, who has performed with Indigo Girls since 2012, accompanied and supported Indigo Girls all evening. Midway through the set, all four stepped aside to allow Bitch to perform for a few minutes. DiFranco joined Indigo Girls for the encores. With so much activity on stage and a sold-out crowd below, there was hardly a reminder that we are still in a pandemic.