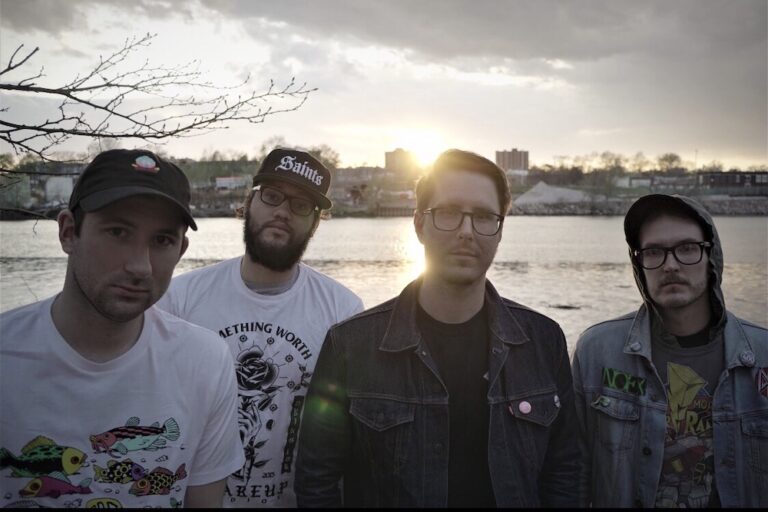 Old Currents Prepare for the Year of Their Lives

It’s Monday. “Here, You Throw This Away” releases on Friday. That gives you only a handful of days to prepare yourself to a new single from Old Currents. You need to get on that. This is your chance.

There’s a lot to look forward to in 2022 – Robert Pattinson making his debut as Batman, Paul McCartney’s 80th birthday, the Bob’s Burgers movie, “22 (Taylor’s Version)” being played on on an inescapable loop, and the new music-induced rise of Old Currents.

Old Currents are a band who don’t go out of their way to be memorable, but certainly are. It’s why anticipating this new era of theirs is something we are already beginning to do. We are just days away from the lead single for their new album; the latter of which is coming our way later on in the spring. It’s not too early to be excited, because their sound takes time to unravel, interpret, and delve into fully. That, right there, is how and why they will become one of the most memorable bands of the new year. We’re ready for that journey… and so are they.

“Here, You Throw This Away” is out for the world to hear in just about two weeks. What about this song and this release do you think sets the stage for your forthcoming album release?

We think “Here, You Throw This Away” is a perfect preview to the entire album. It really showcases all the elements that make us, us. We set a lot of goals for ourselves before we got into the studio, and with the help of Chris Badami, we did exactly what we set out to do and we are too excited to share it with the world.

The accompanied video for this first single shows us both a performance and a narrative working together to tell the story of the track. With this song and this video, what message do you hope fans new and old are to take away?

In the grand scheme of things, we want fans old and new to see that we’re a serious band, with serious aspirations of taking this beyond the garages and basements that made us. We want people to see that we want to truly take things to the next level and will do everything in our power to do just that. As for the song and video, we wanted to show that you shouldn’t just throw away your friends when they need you most, despite how much of an inconvenience they’ve become. You should always be there to lend an ear and be there for them when they need you most. And we think Danny Flaherty (lead actor and director) and Eric DiCarlo (co-director and cinematographer) really helped us bring that idea to life.

We know that this album of yours is set to be titled The Glory, The Defeat. What can you tell us, if anything, about this piece of music and how its title plays a role in it?

Each song on The Glory, The Defeat is a story from a moment in our lives. Recollections of our highs and our lows, and the journeys in between. “Here, You Throw This Away” is focused on one of many antagonists (or protagonists, depending on your perspective) one may encounter along the way.

Something very much worth noting is how the band name, Old Currents, perfectly describes the sound you create. It is fresh, new, and current stylistically, but is old taking inspiration from a variety of well-known, established bands. We hear Sublime in your work just as much as we hear Jane’s Addiction and Less Than Jake. How did this band name come about and do you think it represents you as much as we think it does?

Well funny enough, when our lead guitarist Joe Bernechea came up with the name Old Currents that was one of his reasons, so you hit the nail on the head on that one. Old Currents originally went under a different name (an old name of which we don’t speak anymore… -_- #cringe). But the second reason was this band is quite literally the current incarnation of our old band.

While on the subject of influences, it’s really intriguing to hear so many sonic elements filling out this original style you’re building here. Where do you look to for influence, whether it be for a single like “Here, You Throw This Away,” or an LP as a whole?

Oof, how much time ya got? We look to anything and everything for influence. From the bands we grew up listening to, to people we’ve met, and odd situations we’ve found ourselves in over the years. Each member of Old Currents actually has a very different catalog of musical influences. From pop punk to indie, country to hardcore, to whatever helps you get through any given day. We really like to let the listener tell us who they hear when they listen to us.

You must be proud of this foundation you are building for this era of Old Currents, especially kicking it off with “Here, You Throw This Away.” Rip-roaring yet sentimental and oh-so-relatable, what you’re doing is fun and universal. Why create music and art that is widespread and pertinent over something more niche and fluffy, so to speak?

Interestingly enough, we don’t really have a grand plan for our music and the subsequent videos, art, or merch. We view our art as a living thing – almost like a plant. We give it what it needs to grow and try to objectively look over it as it grows to try to create the best representation of our thoughts and feelings on any given subject. The relevancy is a just happy accident.

This alternative rock adventure you’re starting will really be taking off in 2022, so as 2021 comes to a close, we’d love to know if there is anything from the past year or so that you are bringing into the new one? Also, aside from a record release in the spring, what about 2022 is already exciting you?

2021 was really hard for us. Not playing music really takes a toll. So we’re bringing a “play every show like it could be your last” attitude into 2022. That being said, 2022 cannot come fast enough for Old Currents. We’re mostly just excited to play shows again and bring that pre-COVID music community back to its former glory. Plus we can’t wait to have the opportunity to play these new tracks, and eventually the full album for our friends, family and fans. The Glory, The Defeat is more than just a collection of 12 songs. It’s the beginning of a new chapter for the band, and we really want to emphasize this… It’s only the beginning.