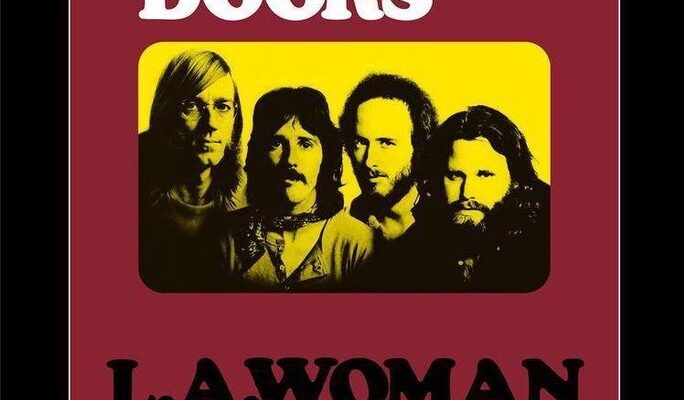 On The Record: The Doors’ ‘L.A. Woman’ (50th-Anniversary Edition) plus Rod Stewart & a Holiday-themed Anthology

Like all its predecessors, April 1971’s L.A. Woman – the sixth and final studio album by the original Doors – achieved Top 10 sales chart status and has now become the subject of a 50th anniversary deluxe edition. The numbered, limited release includes three CDs, a vinyl LP, and a booklet with notes by Rolling Stone’s David Fricke and Bruce Botnick, the group’s longtime engineer, who co-produced the original album with the group.

The band, which took a side trip into orchestrated, pop-flavored material on 1969’s The Soft Parade, returned to blues-based rock on 1970’s Morrison Hotel and continued in that direction on L.A. Woman. The group’s longest record at nearly 50 minutes, it contains some of their best performances, not the least of which are its two hit singles, the propulsive “Love Her Madly” and the foreboding “Riders on the Storm.”

The album, which the quartet recorded in just six days, is also notable for incorporating a few firsts. It was the first Doors album not produced by Paul A. Rothchild, who quit the sessions after dismissing “Riders of the Storm” as “cocktail music” and saying, “I can’t do this anymore,” leaving the band and engineer Botnick to fill his role. Moreover, the record features a second guitarist, Marc Benno, who had been collaborating with Leon Russell in the Asylum Choir and who played rhythm parts on four tracks so that Robby Krieger could deliver his solos live rather than overdubbing them later. The album also incorporates contributions from Jerry Scheff, Elvis Presley’s bass player.

Though the record has been reissued before on several occasions, the well-packaged 50th anniversary edition is the most comprehensive version to date. The first of its three CDs houses Botnick’s new stereo remaster of the original album (which the vinyl LP also contains) plus two bonus tracks: a demo of the record’s “Hyacinth House” and the recently discovered original demo of “Riders on the Storm.” Discs Two and Three, which have a combined playing time of more than two and a half hours, consist entirely of previously unreleased material from the L.A. Woman studio sessions. That mostly means rehearsals and alternate takes of the album’s material, but you’ll also find a few blues covers, including B.B. King’s “Rock Me Baby,” Allen Toussaint’s “Get Out of My Life Woman” (the 1966 Lee Dorsey song), and snippets from Big Joe Williams’s “Baby Please Don’t Go” and Junior Parker’s “Mystery Train.”

Serious fans may note a few regrettable omissions. A previously released surround-sound mix of the album and a session song called “Orange County Suite” are missing. (The former appears on a DVD included with a limited edition 2006 collection called Perception; you can find the latter on 1997’s Box Set and 1999’s Essential Rarities.) Also not included is a new Dolby Atmos mix of the LP by Botnick, which for some reason is available only for streaming.

There’s still plenty to savor here, however, starting with extended variations on songs that wound up on the finished album, including about 21 minutes of “Love Her Madly,” 18 minutes of “Riders on the Storm,” 23 minutes of “Been Down So Long,” 27 minutes of “The Changeling,” and three tracks totaling 33 minutes devoted to the title number. While there are occasional tedious moments on these recordings, most of this material (and especially the “L.A. Woman” and “Been Down So Long” renditions) is downright thrilling. This session work, which is loaded with improvisation, is frequently wilder and more energized than the familiar recordings and permeated with reminders of just how talented all four Doors really were.

Sadly, L.A. Woman proved to be their last LP. In July 1971, less than three months after its release, Jim Morrison’s girlfriend discovered him lying dead in a bathtub in Paris. The remaining Doors did go on to make a few more albums, but don’t hold your breath waiting for big anniversary editions of those. They had their strengths thanks to three strong players, but it took the full quartet to make Doors magic.

So, to quote a line from their debut LP, “This is the end.” But what an end L.A. Woman is, especially in this 50th anniversary edition.

In his brief liner notes for The Tears of Hercules, Rod Stewart proclaims, “I believe this is by far my best album in many a year.” Alas, it isn’t – at least not to these ears – though it has its moments.

You can sense trouble right from the slight opening track, “One More Time,” the album’s first single. One of eight numbers co-written by Kevin Savigar, who co-produced the CD and its three most recent predecessors, the song starts well enough, with acoustic guitar and Stewart’s inimitable raspy vocal. But things go downhill as the beat picks up, backup singers chime in, and the song heads for MOR territory.

The lyrics, which conjure up Stewart’s macho late 1970s releases, don’t help. “The sex was immense,” he sings, addressing an old girlfriend, adding that while he doesn’t want to settle down, “you’ll always be on the speed dial.” Also contributing to an unfortunate image is the accompanying video, which finds the 76-year-old singer joined by three women who appear to be about 50 years younger and who sing choruses about how they want to have sex with him “one more time.”

The musically cluttered six tracks that follow all disappoint to varying degrees. They include a workmanlike, unexceptional cover of Grand Funk’s “Some Kind of Wonderful”; the Studio 54–ready “Gabriella” and “Kookooaramabama”; the shlocky “All My Days”; a tribute to the late singer Marc Bolan called “Born to Boogie”; and the awkwardly written “I Can’t Imagine,” in which Stewart suggests that he’s now monogamous because while he has sung his songs all over the world and “met some pretty girls” his “youthful days for now are gone.”

If you haven’t bailed out by this point, you’re in for a bit of a treat, because the album takes a musical U-turn for the last five tracks. The title song – by Marc Jordan, who also co-wrote such earlier Stewart numbers as 1991’s “Rhythm of My Heart” – is an attractive ballad that includes evocative lyrics about the end of a love relationship. “Hold On,” which quotes Sam Cooke’s “A Change Is Gonna Come,” is another amiable ballad, and the autobiographical “Touchline” paints a moving picture of Stewart’s father. Although overloaded with instrumentation and backup vocals, his cover of Johnny Cash’s “These Are My People” also has its charms. Then there’s “Precious Memories,” the album’s best song, which is redolent of doo-wop and features an excellent sax solo.

Songs like these leave no doubt that Stewart remains one of rock’s most appealing and distinctive singers. Some of the other material, though, suggest he needs to relisten to the best tracks on his earlier standouts – 1971’s Every Picture Tells a Story and 1993’s Unplugged…and Seated come to mind – and rethink his approach. For starters, it might be time to try a new producer.

Highlights Abound on a Holiday Anthology

Though the digital-only Holiday Rambler includes an excellent version of “Blue Christmas” (performed by Erisy Watt with Jeremy Ferrara on guitar), the album mostly eschews seasonal classics in favor of impressive new originals by artists on the American Standard Time label.

Granted, the set includes a few sub-par novelties, such as A. Farley Jones’s avant-garde “Christmas Wash” and the Workshop Lawn Gnomes’ “Santa Got a Sunburn.” But highlights abound, including “Too Broke to Go Home for Christmas,” where Ryan Curtis sounds reminiscent of Tom Waits; Meredith Lane’s sweet “The Winter Song”; Andy Dale Petty’s instrumental “Golden Flour”; and Laith’s melancholy “Forecast.” Also: Caitlin Jemma’s version of Joni Mitchell’s “River,” which mostly echoes rather than adds to the original but nevertheless ranks among the prettiest songs on the record.