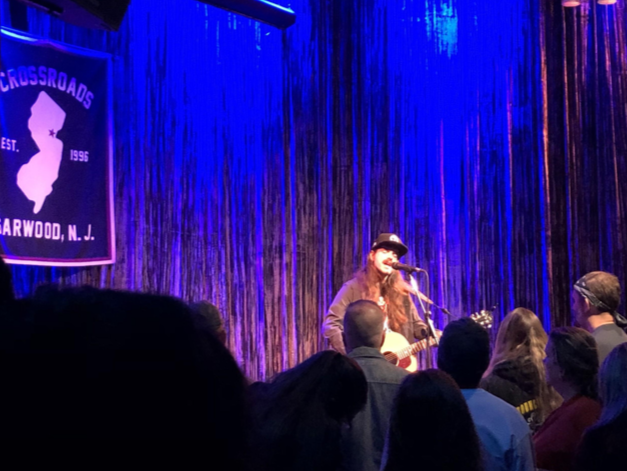 Allow me to preface by saying Lucero is one of my favorite bands, since they came on my radar in 2017. And when I saw them in October, it was one of the best concerts I ever saw. However, frontman Ben Nichols did a solo show the other night, and it was the complete opposite. This pains me to write, but the rose-colored glasses are coming off.

When Lucero returned to New Jersey last time, I stood front row. Every member of the band was firing on all cylinders. Every note was pure and sounded just like their albums. The five musicians above me were so in-synch and giving a performance I have yet to see contested. I had a visceral emotional release that night and cried several times during the show. The price of admission was covered tenfold. Solo Ben, though, I wanted to cry for a different reason.

Ben returned to Crossroads in Garwood, NJ for his third annual January solo show (would’ve been fourth, but COVID was an issue in 2021.) He brought along with him Jared Hart, New Jersey native and member of Mercy Union, as an opener.

Jared took the stage shortly after 9:00 p.m., opened up his stickered guitar case, and began with a humble thank you. He played a Gibson acoustic guitar with his long brunette hair under a black baseball cap and a neatly trimmed mustache. The first song began with an interesting blend of chords and pinch harmonics, but his vocals are his true calling card. He can belt out notes with a yowl that caught my attention in the first few seconds and retained it for his entire set. The power in his raspy voice is so hefty that even when he stepped away from his microphone, the volume stayed just as loud. There is a certain amount of vibrato in his tone that should not be discounted. In between songs, he told stories of New Jersey life, such as being kicked out of the Tropicana [Casino] (“I retain innocence!”).

One thing I noticed about Jared is his humility. Several fans in the audience were singing along to his songs – and he knew them by name. He dedicated songs to Sabrina, Andy, and a few others. Throughout his 45 minute set, he kept cracking jokes with them and saying they’ll catch up with a drink after his set. I like when artists have a rapport like that with their fans. A couple in my vicinity were crying during “The Guillotine.” His second to last song was “Money Changes Everything,” a Cyndi Lauper deep cut. Before he exited the corner stage, he told us his plans for the new year: “If I can get some new tunes out and play Crossroads, it was a good year.” He exited the stage to palpable applause. Never heard of him prior, but I’m a new fan.

After a brief intermission, Ben hit the stage around 10:15 p.m., with a bottle of bourbon and a bucket of ice in hand. His band, Lucero, falls somewhere in the ‘crossroads’ of country, alternative, and folk punk. Nichols asked where fans came from – Maryland, Ithaca, Knoxville, Mississippi. He assured everyone he had a setlist and would be sticking to the setlist… until someone called out “Raising Hell,” which he said wasn’t on the list, so “that’ll go first.” This, “Texas and Tennessee,” and “Went Looking For Warren Zevon’s Los Angeles” were the first three songs he played and they were sharp… but it all went downhill from there.

Ben began to drink from his bourbon and all cheered in the crowd. The crowd continued shouting song requests at him; while he was tuning for a song, actively playing, or just ended a song. Not only that, but a fan named Katie suggested a song for him to dedicate and he attempted to play the intro, forgot how it went, retried it, forgot again, and eventually gave up. Maybe next year, Katie.

That was not the only time that happened. Nichols stumbled through many of his songs. Ironically, he played his “falling trilogy:” “I’ll Just Fall,” “And We Fell,” and “Took the Fall.” Not only did he stop and start for those three songs because there was active concern that he may topple over. He tried sharing many anecdotes, but they trailed off like his songs. It didn’t help when fans sent up shots and drinks to the stage, which he accepted and drank.

According to Setlist.fm, he played 29 “songs.” What that website doesn’t consider is the fact those weren’t full songs, but mere fragments of attempted tunes. Rehearsing the melody on stage and relying on the crowd for lyric reminders was his norm. It is a problem when your fans are shouting to play something-literally any song and you have real difficulty remembering songs that are in your repertoire for over two decades. At no point did he ever really have his act together. Like I said prior, three – maybe four – fully performed tracks. The crowd dispersed steadily throughout the set.

Many of Lucero’s songs are drinking tunes, but the problem with writing drinking songs is the expectation to keep up the pace. I’m shocked that a lifelong musician had a rookie night like this. It’s bizarre; my favorite and least favorite concert experience were from the same artist. Every artist has had a bad night. This… was a trainwreck. If anything good came from this show, it is that I have added Jared Hart to my radar.