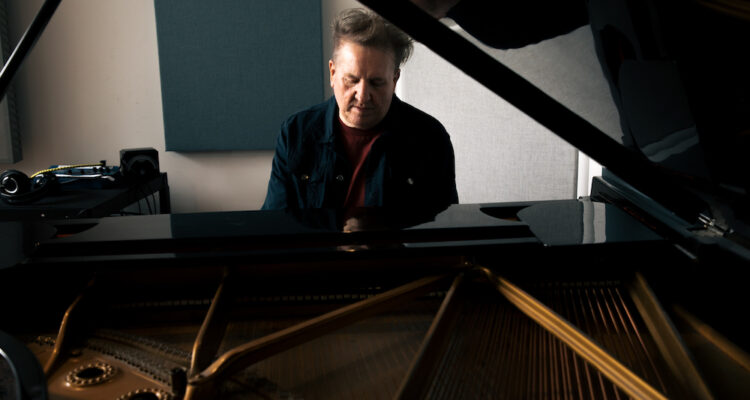 “Set a Few Things Up” is a command and a suggestion, but it’s also the new single and music video from Pierce Turner.

An Irish bloke who put down some deep Big Apple roots over the years, this singer-songwriter has a sound and a style that is vintage and homegrown in the most superb way, but still holds your attention today, in the modern age, as if it is this creative endeavor that is shiny and new.

Wholly unrefined  with an understated amount of rock and roll grit, the performer comes across as refreshing – the complete opposite of manufactured. Turner is a professional and a dedicated artist, which is a proven fact given his track record of collaborations and inpenetrable artistic relationships, but there is something so raw about his work that it’s easy to feel like a song such as “Set a Few Things Up” is a command given to you, the listener, as a direction that you can understand and should be following. His established musicality as a classic rocker with contemporary taste and extensive influences come to a head in 2022 with this release – which, as the third single, sets the stage for the forthcoming LP on February 25, Terrible Good.

(Saint Patrick’s Day, March 17, is another date to keep in mind, as you might want to ‘set things up’ so that you can head over to Joe’s Pub for the album release show! It’s going to be a full band and a full set!)

Fans new and old can get ready for that with “Set a Few Things Up” and follow along to the effervescent, Robert Smith-esque track as if Turner is playing it just for them. And yet, we have to drive home again that the song emotes an intimacy and reality that makes everyone feel part of the experience. The brand new music video, which we are honored to premiere today, is just as anchoring and, surely, just as fun. It’s riveting, cinematic, crafty, and lighthearted. There are colors and harmonies, NYC ‘easter eggs,’ and more within the intricate, lively illustrations that conglomerate everything that makes Pierce Turner, Pierce Turner.

Mark Lerner and Nancy Howell of The Mark of Nancy crafted the video with love and a keen eye for what makes a song like “Set a Few Things Up” a monumental movement… on top of being a rocking song.

“Set a Few Things Up” reminds listeners that everyday is new, everyday is real, and everyday is up for the taking. If you’re anything like Pierce Turner, that day is a chance to rip into something musical with no qualms about the outside world. Uniquely his own boss of both his art and his day, he knows that sometimes you have to take the time to chase your dreams, and other times you have to let yourself rest. Why can you do that? Because as this single and its accompanying video explains: Tomorrow will come again and be there for you to start anew with an electric guitar in hand (or whatever else inspires you in the moment), so set up what you want for tht day and live in the moment until then.

“Being a musician is a dodgy way to make a living, just like anyone who is self-employed I suppose,” explains Turner about how his life morphed into such a song like this one. “But it is a portable job, so there is always a gig around the corner that gets us out of trouble, so long as there is a guitar or a piano to play, I can make a few bob.  Being a songwriter requires a certain amount of living outside the box I suppose, the trouble is, sometimes you live there too long, and then you have to get up, shake yourself, and set a few things up. Hunt for a gig.”

Doing what you’re passionate about and paying attention to what makes your days fulfilling, now more than ever, is vital to the joy you feel and the productivity you can have. Pierce Turner is an eloquent songwriter and a true folk rock star for all generations to jam to and learn from. He understands balance and reflects that in a track like “Set a Few Things Up!”

Balance is what makes him real. He is a musician and a rock star, as previously described, and he is a regular New Yorker, too, spending half the year in the city making connections and sharing his wide array of interests with the people he meets. (A musician and solo artist is just one aspect of who Turner is. He has also worked in movies and film scoring, operas, and other influential, melodic projects.)

Pierce Turner is living his truth and doing those exact things, working with people he is inspired by to make music that inspires others. Gerry Leonard, the guitarist known best for his time with the late, great, interstellar star that was David Bowie, is a collaborator on this new single. Leonard is an art rocker in every sense of the word. Together, Turner and Leonard teeter on the edge of glittery, atmospheric progressive music, and still have a basis in folksy, ambient, and eclectic Irish rock – both being Irishmen who set up camp in New York.

One of his previous releases, “Where It Should Be,” has this bluesy storyteller essence. It drives home that idea that we can do and create anyting as we explore our day-to-day and share ourselves with others. It is these two songs that discuss how fleeting life is and how important sculpting our own path and passions can be. His tone as an artist builds out that idea in a Johnny Cash meets The Cure sort of way. Reflective fifties and sixties artistry with the production quality and electricity of the eighties illuminate where Pierce Turner is going and what he wants to say in his jam-worthy music.

“SET A FEW THINGS UP” IS OUT NOW WHEREVER YOU LISTEN TO MUSIC! PIERCE TURNER’S NEW ALBUM, TERRIBLE GOOD, IS OUT ON FEBRUARY 25! MORE INFO ON TURNER AND GERRY LEONARD’S SHOW AT JOE’S PUB IN MANHATTAN ON MARCH 17 CAN BE FOUND HERE!