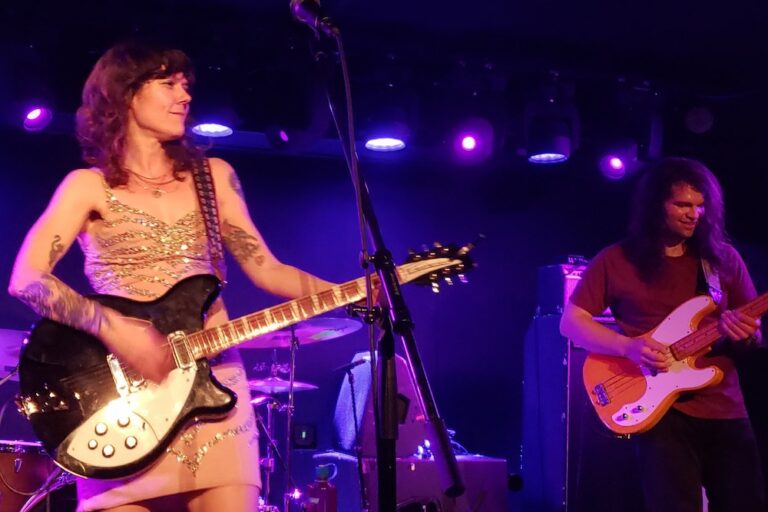 Lilly Hiatt received her first guitar, a 1953 parlor-size Martin acoustic, from her father, singer-songwriter John Hiatt, when she was 12 years old. She wound up singing in the school choir and began performing solo in her senior year of high school. Shortly thereafter, she left the farm in which she was raised in Nashville, Tennessee, to attend university in Denver, Colorado. She graduated In 2006 with a degree in psychology. Music was already her calling, however. While in university, she had joined fellow students in a jam band, Shake Go Home, and after graduation, the band moved to Nashville, Tennessee and recorded several EPs. Hiatt literally went in another direction and relocated briefly to Austin, Texas, where she recorded her debut 2012 album. She returned to Nashville in 2013. Hiatt released her fifth and most recent album, Lately, on October 15, 2021.

Following an impressive set by the support act, the Harmaleighs, Hiatt climbed on stage, strapped on a guitar and, accompanied by her three-piece band – guitarist Josh Halper, bassist Robert Hudson, and drummer Luke Fedorko – started to rock the room. At first, the concert seemed like it was going to be a country music show, but before long the band demonstrated that it was well-rooted in rock and roll. Hiatt bounced around the stage as the guitarist’s solos grew longer and more dynamic.

Hiatt sang in fine voice, and with an authenticity that hinted she had lived her quest-filled lyrics seeking deeper meaning from an ordinary life. The lyrics, sometimes panoramic, studied loneliness and human behaviors, a little bit dark, a little bit disturbed, but nevertheless, hopeful. At times, her reappearing southern drawl gave the lyrics a tad more personality.

Hiatt’s music sounded like it might be too country for the rockers and too rocking for country music enthusiasts. Nevertheless, there is bound to be a wider audience of in-betweeners. Lilly Hiatt may yet make her mark in the music world.