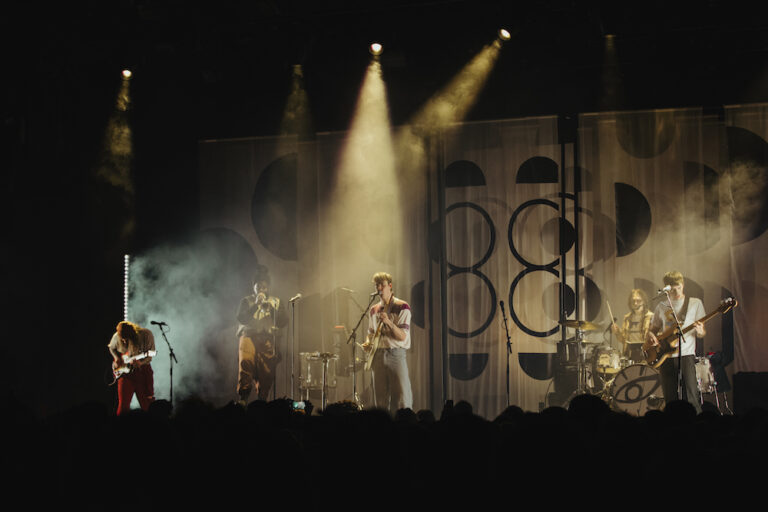 The Hippo Campus Gallery: Stunning on Stage & Off

Nicole Conflenti knew the Brooklyn Steel lighting would be perfect – and it was. When Hippo Campus took the stage on March 1, the photographer knew just how to capture them shining – right under those epic, industrial spotlights.

With three million monthly listeners, Hippo Campus is proving that indie bands are so much more than what people expect them to be. The term ‘indie’ originated as an abbreviation or slang term for independent – a band free of any label or corporate overhead – but over time it has evolved into an adjective for a certain sound and style of music. Think: slightly off-key guitars, subtle production, vulnerable songwriting, and a not-too-mainstream take on melodic experimentation. In reality, though, that just scratches the surface of what an ‘indie band’ can do.

Florence + the Machine are ‘indie.’ COIN is ‘indie.’ BENEE, Bon Iver, Death Cab for Cutie, and even Fiona Apple fall in this increasingly robust and talented group of ‘indie’ artists. Hippo Campus is, appropriately, right up there with all of them thanks to their simply rocking, feel-good, nostalgic, cohesive, sonically and visually enchanting songbook. Photographer Nicole Conflenti used her heart and her camera to depict that at their live show last week in Brooklyn, New York – as you can see here:

KEEP UP WITH HIPPO CAMPUS BY CHECKING OUT THEIR WEBSITE! FOR DETAILS ON HOW TO CATCH THEM ON TOUR, CLICK HERE!