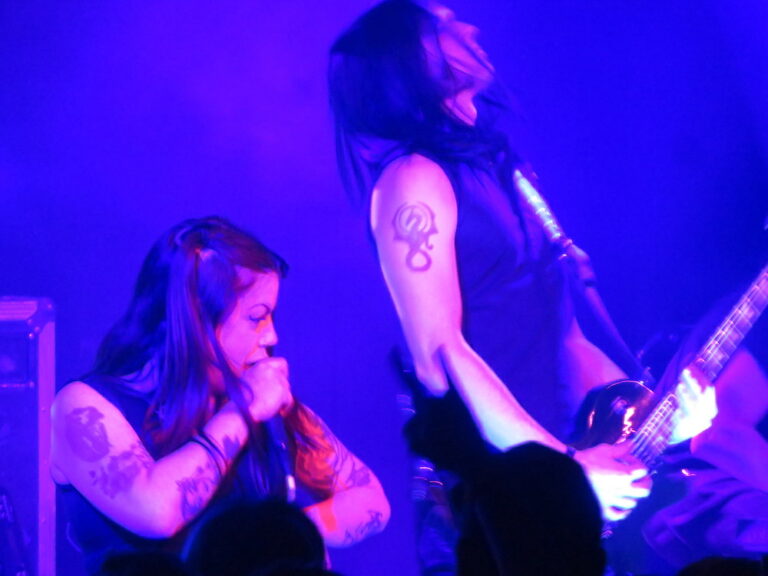 VampireFreaks started in 1999 as a social networking site for goths and punks, grew into an online and physical store (2008-2011), and produces events for its unique subculture. VampireFreaks has been faithful to the Birthday Massacre since the Canadian band formed in 1999, even hosting meet-and-greet parties for the band at the East Village store more than a decade ago. VampireFreaks launched the Birthday Massacre’s long-delayed 28-date 2022 tour by booking a headlining concert at le Poisson Rouge.

Fans of the band heard the first performances of four songs from the band’s ninth and most recent album, Fascination, released on February 18. Since the band was unable to tour in 2020, the set at (le) Poisson Rouge also debuted three songs from that year’s Diamonds album. All but the band’s debut limited-edition album were represented in the evening’s repertoire. The band also performed a cover of Limahl’s “The NeverEnding Story” from the 1984 film by the same name.

The Birthday Massacre’s sound was driven by bone-crunching riffs eased by contrasting synthesizer and vocal melodies. The music stayed on the lighter side of darkwave and the darker side of synthpop, with the power chords sometimes leaning toward a 1980’s arena-rock revival. A wash of atmospheric keyboard work softened the impact of the aggressive guitars.

Perhaps unknown to the band, the show was beset by a couple of failures. The red, blue and violet lights on stage never brightened enough for much of the audience to really enjoy a good look at the musicians working their magic on stage. Secondly, the instruments were turned up significantly louder than the vocals. The audience could hear Chibi’s vocal melodies, but comprehending lyrics was impossible.

The Birthday Massacre will return to Parsippany, New Jersey on April 1 to perform at the Dark Side of the Con, North America’s largest annual goth convention / festival. The band will follow with extensive international touring. This will include treks across South America, the United Kingdom, and continental Europe.