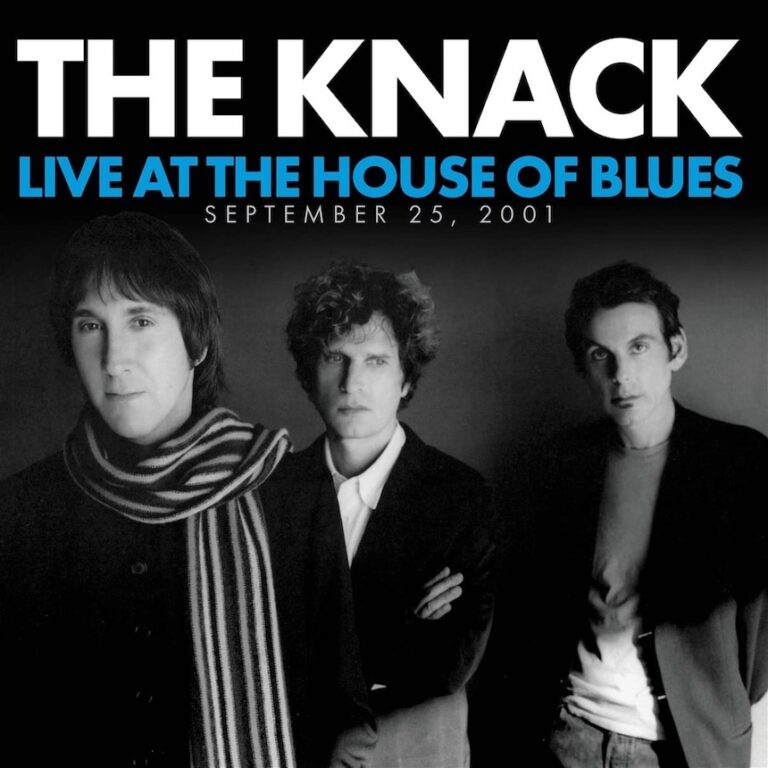 On The Record: The Knack’s ‘Live at the House of Blues,’ plus Ann Peebles, Barney Bentall, & Steven Casper

The Knack rocketed to fame shortly after forming in 1978 when a series of club gigs in Los Angeles prompted nearly a dozen record labels to make offers. The group wound up signing with Capitol – reportedly for more money than the company had ever previously paid to add a band to its roster. The bet at first appeared to pay off when the quartet’s debut album, Get the Knack, ranked among the bestselling LPs of 1979, and its first single, “My Sharona,” not only topped the charts for more than a month but captured the No. 1 spot on Billboard’s list of the year’s biggest hits.

It was all downhill from there, however, with a sophomore LP peaking at No. 15, a third album making it only to No. 93, and subsequent releases not even charting. The band, which split up in 1982, did reunite four years later and continued to perform and sporadically record for nearly three more decades, until guitarist and lead singer Doug Fieger’s death in 2010, but it never came close to repeating its initial success.

That success was, in fact, just a distant memory by the time the Knack gave the 2001 performance preserved on the new Live at the House of Blues. However, you’d never know that from this 76-minute concert, which features Fieger and fellow original members Berton Averre (vocals, guitar) and Prescott Niles (bass, guitar), plus then-new drummer Dave Henderson. Sounding as ambitious and energized as if they were auditioning for their first record deal, the four revisit the Knack’s glory days, devoting eight of the show’s 18 songs to material from their decades-old debut album: “Good Girls Don’t,” “Let Me Out,” “Oh Tara,” “(She’s So) Selfish,” “Siamese Twins (The Monkey and Me),” “That’s What the Little Girls Do,” “Frustrated,” and, of course, “My Sharona.” They also deliver eight numbers from later LPs and a few covers.

Don’t buy this set for those covers. The Knack’s reading of the Monkees’ “Last Train to Clarksville” is fun and well suited to the group but adds nothing to the original. As for a medley of (believe it or not) “Tequila,” the Champs’ 1958 hit, and the Doors’ “Break on Through,” you must give the band credit for attempting such a strange blend, but its version of the latter number is particularly awful, especially by comparison with the original.

To these ears, the rest of the album is a mixed bag that shows the Knack deserved neither its quick ascent nor its equally rapid decline. On the negative side are its manic, percussion-driven rockers, typified by “My Sharona” and its attempted clone, “Baby Talks Dirty,” both of which become tiresome in a hurry (though the former boasts a good, long guitar solo). But the band’s more melodic and well-hooked power pop, such as “Oh Tara” and the harmonica-spiced “Good Girls Don’t” (heard below in its studio version), holds up to repeated listens. Like the Raspberries hits, which they somewhat recall, those numbers do a good job of describing teenage lust and angst while tempting you to sing along.

Ann Peebles & the Hi Rhythm Section, Live in Memphis. Most discussion of Willie Mitchell’s Hi Records focuses on the fabulous Al Green, but the label boasted another multitalented singer in Ann Peebles. She has a good showcase in this 40-minute CD of a 1992 concert, which preserves her only live recording with the famed Hi Rhythm Section.

Highlighting the 10-track program are gritty, soulful readings of such numbers as Earl Randle’s “I’m Gonna Tear Your Playhouse Down” which she first recorded in 1973 and which provided a 1984 hit for Paul Young; “(You Keep Me) Hangin’ On” (the Ira Allen/Buddy Mize number, not the Supremes song); “Part Time Love,” which gave Peebles an R&B Top 10 hit in 1970; and the concert finale, “I Can’t Stand the Rain,” which she co-wrote and which became her biggest pop hit in 1973.

Barney Bentall, Cosmic Dreamer. Canadian singer/songwriter Barney Bentall, who is best known for his work with his 1990s band the Legendary Hearts, has a winner in the understated Cosmic Dreamer, his seventh solo album. The set, which includes nine sweet and bittersweet ballads and two covers, focuses almost exclusively on emotions, which the lyrics imaginatively and evocatively describe. Like such artists as Nick Drake, Bentall on this album manages to keep you engaged without ever raising his voice or heading into uptempo territory. Backing him are his co-producer, Adrian Dolan, on piano, keyboards, accordion, mandolin, mandola, and fiddle; a bassist; a drummer; and a handful of talented guests.

Among the many fine originals here are “Potter’s Wheel,” a portrait of a woman that finds the artist sharing vocal duties with Ruth Moody of the Wailin’ Jennys; the poetic “Cody Road,” which limns a quiet moment between two friends; “Why Are You So Sad,” which offers help to an unhappy friend; “Oh Foolish Me,” in which the singer laments the end of a romantic relationship; and “Not Standing Up to You,” which could be a teenager’s farewell letter to his parents. Also excellent are two well-chosen covers: “Shadows,” by fellow Canadian Gordon Lightfoot, and Bob Dylan’s “You’re Gonna Make Me Lonesome When You Go,” which features emotive vocal contributions by an Italian singer named Valentino Trapani.

Subjects range from hopefulness (the title cut) and loneliness (“So Damned Hard”) to Casper’s mother (“By Your Side”) and partying (“Howling at the Moon (Wine and Weed”)). Those tracks are all excellent as are the set’s two covers: the traditional “Motherless Child,” one of the CD’s few mellow moments, which features gospel singer Linda McCrary Fisher; and a danceable rendition of Dylan’s classic “Absolutely Sweet Marie.”