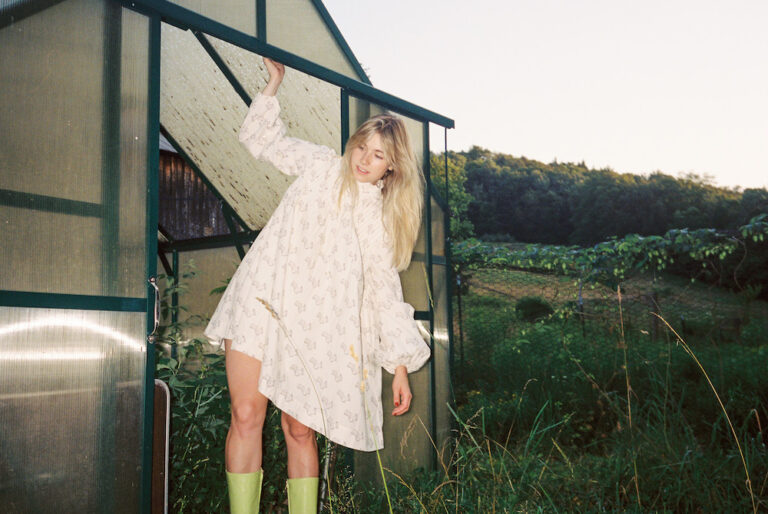 About the Vibes with Kate Bollinger

If every dream of yours had a soundtrack, they would all be to the tune of Kate Bollinger.

Kate is a storyteller. The nuances of her musical being are wrapped in a warm, knit blanket and cozied up by a fire. Whether it be a fireplace in the dead of winter or a fire pit in the peak of summer, your most storybook moments and memories fall in line with at least one song from this rising popstar. Honeyed melodies are who she is, folksy harmonies are what she’s made out of, and unsuspecting narratives (yet riveting, for sure) are able encapsulate the two.

She is sweet and demure, looking at art like it’s oxygen and breathing it in every moment of the day. Wry lyrics and emotive vocals play on another flawlessly, giving way to a collaborative, but immensely personal Bollinger and her roots in freeing songwriting and creative direction. As a headliner this time around, fans are going to be able to experience that firsthand as Look At It In The Light – her brand new EP – has it’s full, well-deserved, quaint moment on stage. We were able to have a quick chat recently with Kate Bollinger herself about all of that singer-songwriter goodness.

I do want to talk about the EP and I do want to talk about New York, but I am going to start off by asking you about what it has been like to go on tours with bands like Real Estate and artists like Faye Webster, but now having your own headliners embark on. What are you learning on your own for these shows and what have you taken away from the opening slots?

It’s been such an honor to tour with all of those bands and it’s been really special. I’ve been excited to have been able to tour with such different acts and kind of see all of the different ways that you can put on a show between Real Estate and Faye Webster. […] One thing that I actually want to avoid is sort of being pigeonholed and thought of in one way or as a person making one sort of style of music. I’ve loved getting to tour with all of these different types of band. That’s been really cool for [diversity]. Then I’m just really excited to headline my first tour and sort of see who comes out now, because I think that’s something you don’t really get to understand until you are headlining since the crowds that you’re going to as an opener aren’t really your own necessarily. I’m just excited to meet everybody and see who comes.

It’s hard not to admire how aware you are of pigeonholing in music and art. I think that is so important these days and having listened to you on Spotify, I can see that you’re able to be found on such a cool variety of playlists that people are making firsthand. Everything from a playlist titled “badass” to a playlist titled “Totally Stress Free” feature your songs… and I think there was one that was “sleeping in a fairy garden” and another, simpler “bedroom pop.” For you, has anything stood out when it comes to the songs yours and where you’ve heard them or where people have discovered you?

Yeah. I mean, the playlist that you mentioned, the fairy one was really cool to see ’cause I think my sound has kind of been evolving and I’ve been more inspired by folk music and I think it’s headed more in that direction a little bit. It’s kind of cool to see that people are picking up on that and and responding to it.

Definitely. I think that they are because even just looking at your aesthetic outside of listening to your sound, it feels very cohesive. It’s all ‘Kate,’ all the time.

Thank you. I’m glad it’s cohesive. I think that’s something I’ve always sort of been aware of and I haven’t felt like – at least early on – haven’t that my style was very cohesive because I do have so many different influences. I wanted to work them all into what I was doing and I wanted to somehow include all of them, so at the beginning it all felt a little bit random. I’m glad that it feels cohesive coming out on the other side.

Another thing I did want to talk to you about is Look at it in the Light, of course. You co-produced that. I heard you were kind of hands-on with this outside of just the singer-songwriter aspect of making an album. How important is that for you to really be a part of the process to create your vision and make these cohesive packages for your fans?

I think it’s really important to be involved in every step of the process. In the past I’ve been a little bit less sure of my vision, I guess, and I mean… I’ve always been there, obviously and I’ve always had a pretty good idea of what I want things to sound like, but I think for this EP, I had a really strong preconceived idea of how I wanted things to sound. I don’t think that was really the case in the past. With that being said, I also had an idea of how I wanted things to go, but then we also ended up doing a lot of just experimenting in the studio. The band was there for a few days – maybe four days or five days – then after they left John, who produced the EP with me, just stayed at the studio for a few extra nights to sort of overdub and add little things, just kind of play around with different sounds and stuff like that to make it [mine]. I definitely want to be that involved from this point on.. I just think it’s so important.

As I said earlier, it is a package deal sort of record; each one of these six songs and how it flows in and out of each other.

Ok, good. Yeah, that’s good to hear. I have somewhere in one of my notebooks like three pages of all different tracklists trying to figure out what the order should be. Because with the songs, I wrote all of them, and many more that didn’t end up making it onto the EP, all within the same probably six months of each other. They weren’t necessarily all liked and it wasn’t obvious that they were going to all be a part of this project, but when I started arranging them, it kind of became clear that these six sort of were about the same things and had some kind of thread running through them. I’m glad that that comes through.

Is there a song or two that you are the most excited to bring to life on stage, specifically in New York or just on tour in general? Because I do always hear that not every audience is the same and you have a sizable discography coming together. With that catalog ever-growing, is there a song that really you can’t wait to show off to your fans – one that you’re really itching to play at one of these headline shows?

Yeah, but the song that came to mind isn’t out yet, so I’ll tell you about that song. It’s called “Running” and it was going to be on this EP that I wrote it probably probably like a year-and-a-half ago now or something, but it still feels new and I’m just really excited about the way that my band sounds playing it. I’m looking forward to playing that one live and then also the title track – it’s a special one that I really like playing.

KATE BOLLINGER PLAYS AT ELSEWHERE IN BROOKLYN ON WEDNESDAY, JUNE 15. FOR TICKETS AND DETAILS, CLICK HERE! LOOK AT IT IN THE LIGHT IS AVAILABLE NOW WHEREVER YOU LISTEN TO MUSIC!