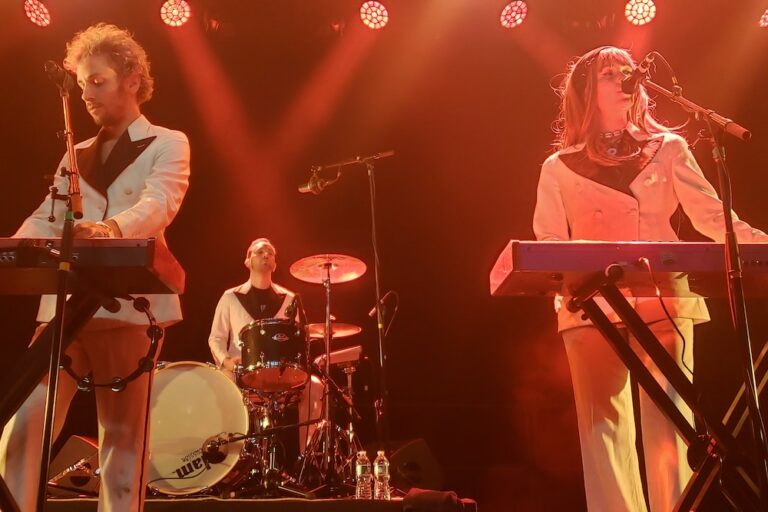 France Rocks Summer Fest may be the largest festival of French music in the United States. The fifth annual celebration features electronic, jazz, world music, and pop/rock artists at 15 live music events in Brooklyn and Manhattan throughout the month of June. A rare stateside appearance by La Femme, a psych pop act from Paris, was among the most anticipated shows, selling out Brooklyn Steel in advance of its June 5 performance.

Formed in 2010, the then-unknown band toured the United States with only 3,000 Euros on hand to promote its debut EP. This proved to be a clever marketing strategy back home, as the French audience was intrigued that one of their bands was on an American tour, so why did French pop fans not know the music? The band developed a following and released its third album, Paradigmes, on April 2, 2021. La Femme presently consists of keyboardist Marlon Magnée, bassist Sam Lefevre, guitarist Alexis Molenat, drummer Noé Delmas, and vocalists Ysé Grospiron and Nina Giangreco.

Local band cumgirl8 and an Australian who lives in Paris, Sam Quealy, performed outstanding indie-rock sets as support acts. During the final intermission, stage hands aligned a line of four simple and identical keyboard stations along the front line; a guitarist, bassist and drummer would perform from the back line. Six musicians came on stage wearing what looked like vintage prom tuxedos. Yes, the band had a light-hearted sense of humor.

La Femme performed a breed of synth pop that sounded like updated new wave music. The band incorporated elements of the 1960s underground pop movement in Europe called yéyé. Some songs leaned towards garage rock, others to surf rock, tropicalia, and even big band influences. Male and female vocals intertwined, sometimes in unison, other times as contrasts. The vocalists almost exclusively spoke and sang in French.

Playing songs from all three albums plus a few extras, La Femme seems to specialize in two styles of pop music. Much of the music was soft, hypnotic, slow-burning or moderate-tempo, with a few brief attempts to jar the easy-going pulse. The band also played a fair amount of faster-tempo songs that sounded like deep cuts from the B-52’s eighties catalog.

The musicians’ movements were limited somewhat in space due to the fixed positions of most of the instruments. Nevertheless, the musicians swayed in place to the rhythms and energized the audience through ongoing engagement. By the end of the show, several of the members took off their jackets and the bare-chested Marlon Magnée did a stage-dive into the audience.

A vast sea of fans from front to back and side to side bobbed to the music throughout the show. La Femme is a party band, and the band succeeded in providing the soundtrack to a fun evening to several hundred French expatriates. Viva la France!