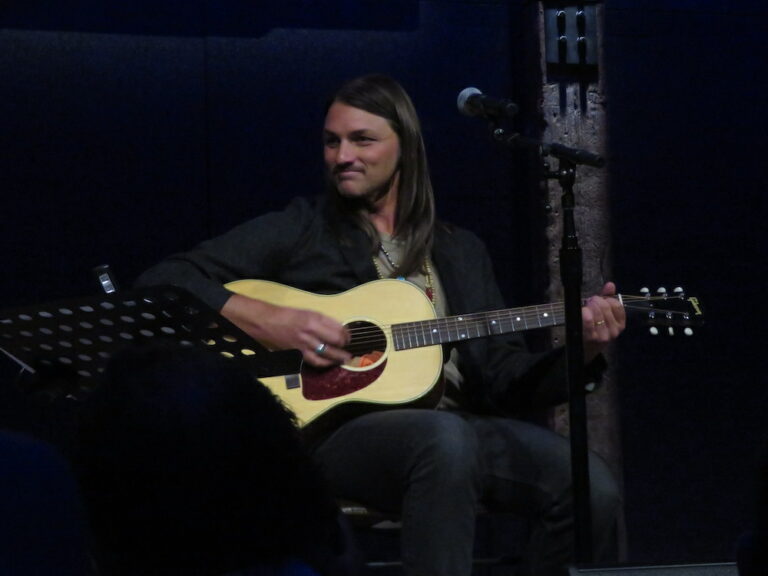 Name recognition firmly in place, Duane Betts gained the immediate interest of classic rock fans when he entered the music circuit. After all, he is the son of Dickey Betts, a founding member and longtime guitarist of the Allman Brothers Band. The younger Betts continues to prove his mettle, currently on an acoustic tour with two former bandmates in the Allman Betts Band, guitarist Johnny Stachela and bassist Berry Duane Oakley.

Born and raised in Sarasota, Florida, Duane Betts learned to play drums as a youth, then switched to guitar at age 12. In 1994, at age 16, he began his public performances, jamming with the Allman Brothers Band in concert. Looking to launch his own trajectory, he relocated to southern California and led two short-lived bands, Backbone69 and Whitestarr. He then spent a decade in his dad’s band, Great Southern. Duane Betts formed Brethren of the Coast in 2014, toured in Dawes in 2015, and played in another short-lived band, Jamtown, a tentative supergroup that also included G. Love, Donovan Frankenreiter, and Cody Dickinson.

In 2018, Betts released his debut EP, the six-song Sketches of American Music, and toured as a guest of the Devon Allman Project. By the end of that year, he and Allman, son of the Allman Brothers Band’s late organist, Gregg Allman, formally announced the formation of the Allman Betts Band. This band also included bassist Berry Duane Oakley, the son of the late Allman Brothers Band founding bassist Berry Oakley, and guitarist Johnny Stachela. The Allman Betts Band recorded and toured extensively behind two albums, 2019’s Down to the River and 2020’s Bless Your Heart. This year, the Allman Betts Band announced a hiatus. Betts is preparing to record a second solo album, to be released early in 2023.

After an intermission following an opening set by Charlie Overbey, casually dressed Betts, Oakley and Stachela came on stage and sat on chairs. Betts and Stachella strapped on acoustic guitars, and Oakley an electric bass. Simplicity would be key. The floor was not littered with distortion pedals and other electronic wizardry. All indications were that this would be a cool, breezy and relaxed set. The music they played would be back-porch homey and not be masked by a larger electric band.

The trio opened the set with “Downtown Runaround” from Betts’ EP before turning the program into a tribute to southern rock. Betts and his two accompanists performed numerous songs either composed by or made known by the Allman Brothers Band and the Allman Betts Band, along with covers of familiar songs by Bob Dylan, the Grateful Dead, the Black Crowes, and Billy Joe Shaver. Betts also introduced new songs that he said will be included in his forthcoming album.

Throughout the evening, Betts provided most of the lead vocals, with Oakley also singing lead on a few songs. Betts and Stachela traded lead guitar licks, frequently in unison for Allman Brothers Band-style twin guitar leads. Oakley’s bass was subdued, just loud enough to be heard gently. With no percussion instruments in the mix, the only beat keeping was done with the strumming of the three stringed instruments.

The show included several surprises. “Althea” was a deep cut from the Grateful Dead catalog, known only by the biggest Deadheads. Betts and Stachela played the leads on the Allman Brothers Band’s “In Memory of Elizabeth Reid” on acoustic guitars, giving the song a depth – and difficulty – previously unheard. Several new original songs showed promise, even though they likely will be electrified when recorded for Betts’ forthcoming album.

The southern rock fans that populated City Winery NYC saw their favorite music in an unusual laid back and easygoing format. The experience might not have been totally satisfying, but the intimacy of the evening was uniquely singular and may never be repeated. Although the audience gave rowdier support to the cover songs, it might be a wise step for Betts to feature more originals in future concerts in order to merit his own songwriting credentials.