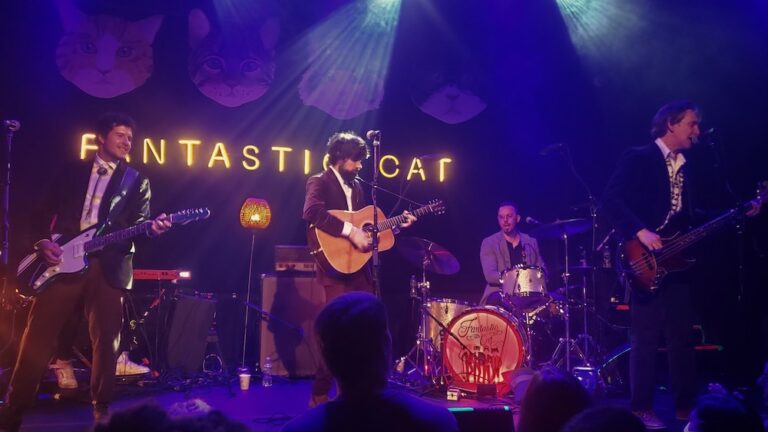 Mike Montali, Don DiLego, Brian Dunne, and Anthony D’Amato know the New York City singer-songwriter circuit all too well. Admirers of each other’s work, on occasion they even performed in various pairings on those stages. One night in 2019, sitting together in the dressing room of one of these clubs, Montali and DiLego began the conversation about seriously forming a band comprised of like-minded songwriters. They asked a waitress what should the new project be called and she said Fantastic Cat. A New York City supergroup was born.

In 2009, Montali co-founded Hollis Brown, a local circuit band which continues to record albums. Since 2001, DiLego has released several albums under his own name and has played the local circuit in Don DiLego & the Touristas. D’Amato also released his first album in 2001, while in college. Dunne worked as a solo artist and began releasing albums in 2015. Now bonded as Fantastic Cat, the collective released its debut album, The Very Best of Fantastic Cat, on July 29.

On the album’s release night, Fantastic Cat headlined its biggest area show at the Bowery Ballroom. Here, the band demonstrated what they offered as a tapestry. Rather than being a songwriters circle, where each musician would showcase their works, Fantastic Cat played ensemble, supporting one another’s contributions. The four musicians switched instruments often – with none of them really proving to be especially adept as a drummer – and periodically had other local musicians, including string and horn players, supplement their arrangements. Halfway through the performance, the core four showed the path that led to this project when they moved into the audience to perform an acoustic mini-set on the venue’s floor. In this setting, each played a song from their pre-Fantastic Cat days, accompanied by their new collaborators.

The combined power of the principal players in one program was beyond what each had presented in the past in their individual projects. Each of the four had come to this project with personal paths already forged, and they built strength upon strength. Montali’s rhythm & blues roots, DiLego’s rock and roll bent, Dunne’s folk inclinations. and D’Amato’s countrified style all complimented each other to make for an Americana-tinged alt-folk-pop sound. Each brought out his own best songs and reinforced them with gang participation and a CSNY or Traveling Wilburys harmony.

The musicians strived to create a unique Fantastic Cat identity, yet this has not yet been fully realized. The rotating lead roles made it too easy to perceive of the show as a showcase for four emerging composers. For Fantastic Cat to sound more fully like a band, additional meshing will need to form, and this can only happen organically, by the group continuing to work together. The outlook is extremely promising.