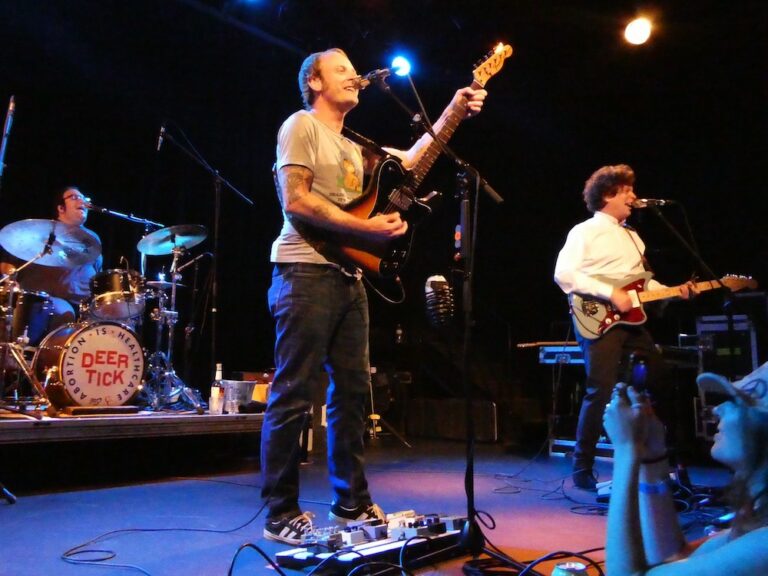 Deer Tick is a turbo-charged rock and roll band that curves primal garage rock by swimming in alt-folk and alt-country influences. For what is essentially a bar band, the quartet is remarkably versatile, comfortably swinging from explosive bangers to introspective, sensitive folk-rock ballads. Few bands find produce this balance live.

The roots of Deer Tick originated as a duo in 2004 in Providence, Rhode Island, then evolved into a solo project for vocalist/guitarist John McCauley, and finally stabilized as a band by 2007. The quartet presently consists of McCauley, guitarist Ian O’Neil, bassist Christopher Ryan and drummer Dennis Ryan. Following seven studio albums from 2007 to 2017, Deer Tick released its most recent album, Live from Fort Adams, on July 30, 2021.

At the Music Hall of Williamsburg, Deer Tick introduced one new song, a Rolling Stones-styled song which may not have a title yet. Otherwise, the band performed songs from all seven studio albums. Cover songs ranged the wild gamut from Jimmy Reed and Santo & Johnny to the Replacements and Nirvana.

Deer Tick’s set was comprised mostly of high-energy bangers that were meant to sound loose and sloppy but actually were structured rather tightly. McCauley’s passionate and rough vocals pushed the few ballads to an in-your-face stance. O’Neil, the newest member of the band, electrified the songs with his soaring guitar leads.

Once upon a time, Deer Tick was a quieter band. This is no longer the case. Weathered and gritty, Deer Tick’s appeal at this concert was in how the band ping ponged between harder rockers and softer folk-country-flavored compositions, feeding edgy twists of alt-country and bursts of noise into the blend. Deer Tick’s original Americana sound has shaken hands with raucous garage rock and roll and the audience has benefited from that alliance.