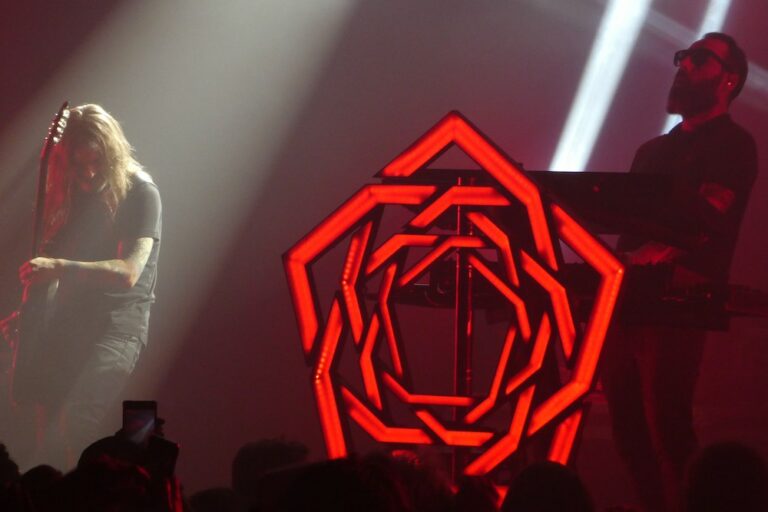 Carpenter Brut is the stage name of Franck Hueso, a darkwave synthesizer composer from Poitiers, France. Combining 1980s-style synthwave with industrial and heavy metal, he seductively welcomes his listeners to the dark side with his macabre instrumental music. This year, his music has grown even darker.

On April 1, Brut released the Leather Terror album, the second installment in his Leather album trilogy, following 2018’s Leather Teeth. Together, the two albums form the beginning of a soundtrack to an imagined movie set in 1987. The inspiration for the first album was rooted in a science fiction story of Bret Halford, a shy American teenager who fell for a cheerleader who preferred the school’s star quarterback. Angry, Halford attempted to create a concoction that would allow him to control everyone, but the concoction instead disfigured him, He then planned to seduce the girl, and all other girls, by becoming Leather Teeth, the singer of a glam-metal band, Leather Patrol. For the second album, Halford is both a rock star and a ruthless avenger who inflicts vengeance on those who hurt him. While the album Leather Teeth was in parts a celebration of 1980s glam rock, the extended plot on the new Leather Terrorgrows more malevolent, documenting the rise of the protagonist as a serial killer. Only Brut knows how the story will conclude on his next album, the closer of the trilogy.

The problem for the audience at Brooklyn Steel was that while the recorded albums have guest artists who help guide the story, the live show did not have this advantage. Joined on stage by guitarist Adrien Grousset and drummer Florent Marcadet, both from the French metal band Hacride, the trio performed strictly instrumental music. This presentation did not require the audience to follow anything other than the music as it was performed.

Brut has elected to remain fairly anonymous. Little is known about him outside of his music. Even on stage, the band was dimly lit from behind, with no spotlights above or in front. Instead, extremely bright flashing and swirling lights. pointed into the audience, reduced the stage presence of the musicians to mostly silhouettes. The band did not provide much to look at on stage anyway, as the three musicians remained fixed at their stations, perpetually staring down at their instruments. Brut never spoke to the audience; this was intentional, as the stage crew placed no microphones on the stage. The sole interaction with the audience was when Brut repeatedly strolled closer to the edge of the stage, gesturing to the audience to respond with cheers.

Even without vocals or the Leather story line, Carpenter Brut’s instrumental music was compelling. This was intricate music, cobbled together as musical movements or suites. Brut built his compositions on dark and aggressive aesthetics and they soared to crescendos majestically. At the music’s foundation, the tempos were speedy and, with the colossal thickness of the instrumentation, the combination was gripping. On top of that core, the dense electronica, the hard rocking guitar leads and the thunderous drums created an innovative path for loud and heavy rock music to travel.

Carpenter Brut is among the dark synthwave acts that are fusing the gap between electronic dance music and heavy metal. The audiences can swing to the music or enter the mosh pit.