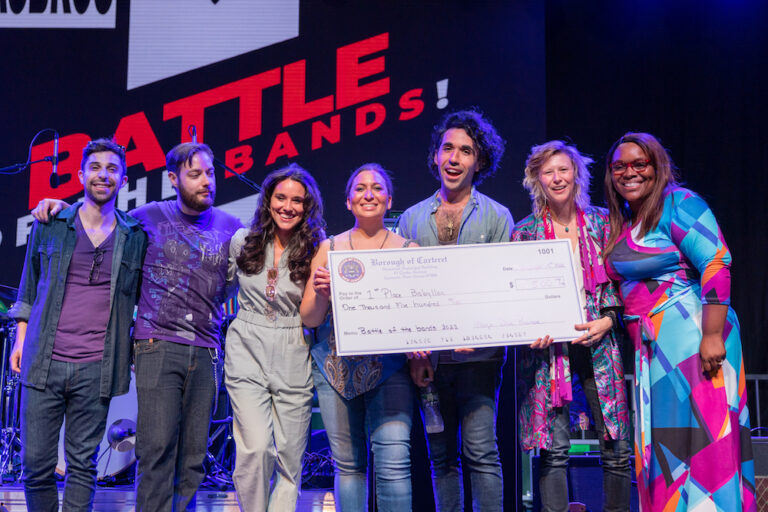 The multi-hyphenated talent of Polina Antoni Kanin is the singer-songwriter-guitarist of funky, soulful blues-rock outfit Babyllon and the founding producer-engineer of PowerBush Records. Her New York City-based act, which has been described as “if Amy Winehouse and Led Zeppelin had a baby in New Orleans,” recently won $1,500 as the first-place band winner of the Carteret Battle of the Bands. In the midst of a cultural and economic renaissance, the blossoming borough also provided $1,500 to a solo first-place winner, New York City’s folky dream-popster Elizabeth Winterbourne, as well $1,000 each to two second-place finishers: singer-songwriter Mel Rose and the energetic trio This Island Earth, both from North Jersey. Organized by the Carteret-based Central Jersey Arts Council, the September 18 band battle closed the borough’s annual five-day Charity Carnival, which included its 46th annual Ethnic Day featuring a performance by Grammy-nominated hit makers Gin Blossoms.

With her winnings, Polina said she plans to help finance the vinyl pressing of Babyllon’s forthcoming sophomore LP, “Collide,” which on November 15 – her birthday – follows the 2017 debut album, Heart Attacks and Southern Roses, as well as several singles. In the following interview, I chatted with the busy singer-songwriter-guitarist-producer-engineer-label owner about winning the Carteret band battle, her forthcoming album, and her band’s affinity for makin waves.

Why did you want to enter the Carteret Battle of the Bands?

I noticed this opportunity while I was promoting the international concert Babyllon will be playing in the U.K. I thought it was an excellent opportunity to connect to a community and have a chance to play and share the music with what seemed like an awesome community-connected event. By no means did I think we would win a competition, and a few of the members are new to Babyllon, which felt so exhilarating to be on stage with them.

Members for this particular show were: Cara Jaye, saxophone; Will Saparano, bass; Nick Potters, drums; Alyssa Muniz, vocals, and Michael Hernandez, guitar. Babyllon has a revolving door of musicians that play the material I have produced wherever they are capable. I think they are astounding musicians, and some people have multiple projects so it’s a very flexible band, which can have multiple positions being taken by multiple people, but, of course, it’s my dream baby so I am always at the helm of the ship.

How did it feel to win?

It felt incredible. It was very unexpected. We loved all of the bands that played and all of the energy they brought, loved connecting with the other musicians! To know we can share the love of healing through music — and know that others feel it — is the best gift of all.

Besides winning the Battle of the Bands, what did you think of the Carteret Charity Carnival as a whole?

It was so full of life! The production of the entire event was fascinating; such a professional, warm, welcoming event. We loved speaking to the people leading the event, as well as enjoying our time there during the day with our families and loved ones and community members.

What inspired the name of the band and its spelling?

The spelling with two ‘L’s’ is for love and life. The inspiration came from a conversation I was having with a close friend one day, that music, like the town of Babel, was a place where after trying to reach heaven, the people of Babel were struck with the inability to speak the same tongues. They, at the time, were left with a common language, the language of music, which heals us all. This is why I named Babyllon Babyllon so that every time you come to a show, you are welcome to embrace a common language of love and movement and healing.

How would you describe your music?

I have been told it sounds like if Amy Winehouse and Led Zeppelin had a baby in New Orleans.  I love that because I love funk and movement and rock ‘n’ roll and loud unforgettable revelation. To me, it’s like going to church.

Who has been the greatest influence on Babyllon, why and how?

The biggest influence on Babyllon were the powerful women and men of music who wanted to create healing and make an impact through the craft of sound.  People who wanted to end suffering are the people that influence me to create the sound and healing of Babyllon.

What other artists would you compare Babyllon to on the ‘for fans of’ tip and why?

Some say Joan Jett & the Blackhearts, Stevie Ray Vaughan, and if Adele was a brass band. I love her music, by the way.

You own your own PowerBush label, which records and releases all of Babyllon’s music. Do you work with other artists as well? If so, who and what’s coming up for them?

I record Babyllon and other various musicians in remote studios, depending on the budget in the hopes of growing PowerBush Records to have its own studio one day. Recently, Max Feinstein released a record I had the pleasure of co-producing entitled ‘Redefine.’ Shortly after that release, I started recording ‘Collide’ for Babyllon, which is set to release at the end of this year. I like to know when I am producing someone that my help will help deliver the soul of each song to create the biggest impact for that songwriter’s vision and emotion. I am always looking for female songwriters/artists who would like to take their career to the next level under PowerBush Records. Booking@powerbushrecords.com for inquiries.

Babyllon released two singles this year, ‘All Your Love’ and ‘David and Goliath,’ which followed several other singles, as well as the 2017 debut LP, ‘Heart Attacks and Southern Roses’. What release will be next for Babyllon?

The singles ‘All Your Love’ and ‘David and Goliath’ are part of this year’s release entitled, ‘Collide,’ which features Nick Potters and Will Saparano, drums and bass from the Carteret Battle of the Bands. The album is set to be released Nov. 15, 2022, my birthday.

Will the $1,500 you won from the Carteret Battle of the Bands help finance your next release?

Yes, absolutely. This check will help to pay for the vinyl pressing for the album! Thank you!

How else will you utilize those band battle funds?

Some of the funds will help fund music videos for the singles ‘All Your Love’ and ‘David and Goliath’.

When and where will you be performing?

I have a few shows planned, mainly Queens Sounds in the United Kingdom, Oct. 11, along with a monthly show in the New York City/New Jersey area. I am currently looking for female acts or female-fronted bands to book shows with for the duration of the 2022 season. For inquiries or suggestions, please email me at Booking@powerbushrecords.com with the name of your band, some links to listen to, and your location.

I want to take a special moment to thank the universe for this amazing night. To thank the universe for sobriety and for the support of this wonderful community towards LGBTQ+ members and women in the music business. If anyone is in need of support, I want to mention I take pride in advocating for women in all fields, especially in the music business, in any business, and in life. The best gift from life that we have is the ability to help each other without thought of anything in return. Love one another, create beautiful art, and connect with people around you. I’ll see you in church!