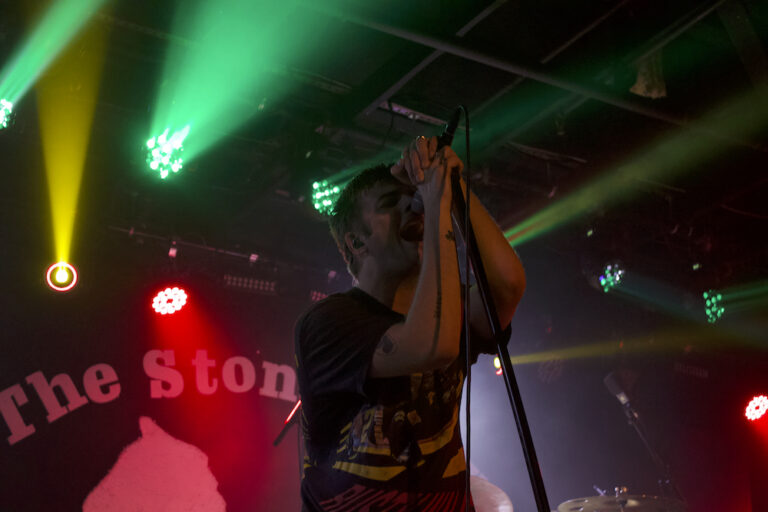 Fontaines D.C. and Wunderhorse at the Stone Pony: A Proper Post-Punk Party

The rain did not let up over Asbury Park when Irish post-punk newcomers Fontaines D.C. swung by The Stone Pony for a sold out show on October 5. The gloominess of the overcast was a perfect complement to the band’s dreary, dark tunes.

Formed in Dublin in 2017, the band consisting of guitarists Carlos O’Connell and Conor Curley, bassist Conor Deegan III, drummer Tom Coll, and vocalist Grian Chatten has been on a ferocious rise to fame. Their debut album, Dogrel, was released in 2019 and won the Mercury Prize. Then they followed that up with 2020’s A Hero’s Death which earned them a Grammy nomination for Best Rock Album. And on their third album, Skinty Fia, from earlier this year? It reached No. 1 on the UK and Irish album charts.

This show was originally supposed to be held at The Wonder Bar, but the tour was postponed, which saw the band grow even more, so the rescheduled date so a venue upgrade. The Stone Pony it was. Their crowd was very fashion-forward, including two young punks – Josh and Declan – who came to see “one of the best bands out of Ireland.” Cheers to them for having great taste.

Opening for Fontaines D.C. was another young band out of the UK named Wunderhorse. Helmed by singer-songwriter Jacob Slater, he and three accompanying musicians hit the stage at 8:00 p.m. Hidden behind a thick haze, the band played a blend of shoegaze and punk for a strong half- hour set. Jacob and his guitarist played TelecastersStandouts from their set including their single “Leader of the Pack,” and their final song, which saw Jacob shouting for his mother to “look him in the eye.” The song began with a lone guitar and snare, then swelled in intensity. He ended that song with a powerful, hearty final scream before walking offstage to droning feedback from their amps. Great set. For less than a year since formation, they’ve got some chops.

Fontaines’ stage setup was pretty simple: a few micstands, a drumset, and an Irish flag. They hit the stage and struck up “Televised Mind,” a bass-heavy punkish jam from A Hero’s Death. Grian was wearing a NASCAR shirt for driver Rusty Wallace and danced around the stage with a tambourine. The comparisons between Grian and Joy Division’s singer Ian Curtis are astonishing, because he has the voice, mannerisms, and frenetic energy of Ian Curtis. (Some of the photographs I captured of him are surreal.)

Following that, the band played “A Lucid Dream” and “Hurricane Laughter.” The five members of Fontaines D.C. are a well-oiled machine; every note sounded like their studio recordings and their ability to focus on stage is worth noting. Conor’s thrumming bass on every song reminds me of Peter Hook from Joy Division and New Order.

Their set included a healthy mix of all three albums, including fan favorites of “I Don’t Belong,” “Too Real,” “How Cold Love is,” and “Skinty Fia.” For the duration of their set, Grian shimmeyed across the stage with restlessness. He picked up the tambourine for several songs (and threw it down when he was done with it).

The last three songs were a brawny lineup – “A Hero’s Death,” “Jackie Down the Line,” and the encore of “I Love You.” They only played for an hour, but not a second of that time wasn’t productive. Fontaines D.C. is the best of post-punk in recent years for a multitude of reasons. Firstly, their music is in a time capsule from 1982. Additionally, their nonchalant attitude to their success is very punk of them. I mean, the lead singer wore a NASCAR tee and Adidas track pants for a sold-out show! Looking past appearance and focusing on their musicianship, Fontaines D.C. is an impressive quintet with a bright future barreling toward them.