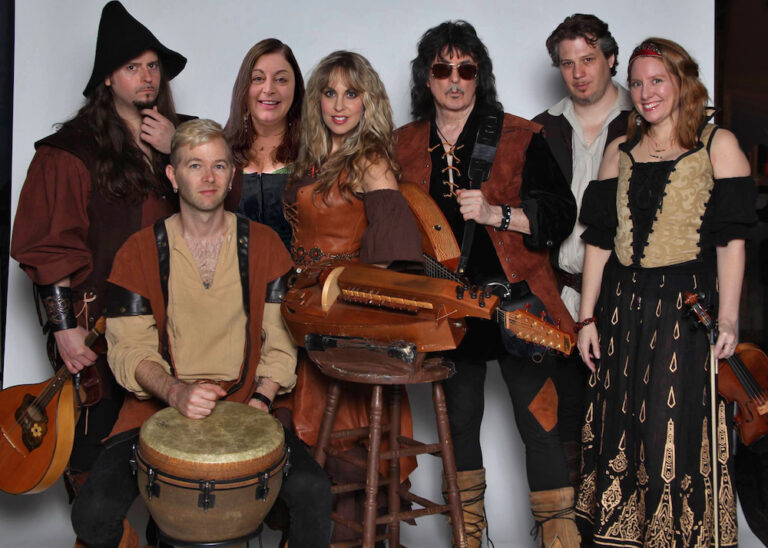 Ritchie Blackmore and Candice Night has made the old new again and the new old again… wait, does that make sense? Well, it doesn’t matter if it does or doesn’t, because on tour and on recording, the music they help make is balanced and creative and filled with mystic and magic.

Over the last 25 years, Blackmore’s Night has created a community that puts artists and audiences on the same level. Every person involved in the Blackmore’s Night production – on stage and off, in the studio and at home – make it what it is today, and what it is today is an act rooted in authentic musicianship, medieval events, and camaraderie. The band would be nowhere without the fans and they are gracious on that account and others. Sure, Ritchie Blackmore, one of the two front-people of the group, is a household name for his time with Deep Purple and Rainbow. However, this is not Deep Purple nor is it Rainbow. It’s a serene blend of folk pop and orchestrational rock. Blackmore riffs and runs on guitar (and a variety of other instruments) like a wizard – that’s the magic. Candice Night, the other front-person, is the human embodiment of a harmony. She personifies the act of harmonizing and does so time and time again – that’s some more magic. What’s mythical are the influences: the renaissance era, times long before people were debating whether to stream a song on Spotify or Apple Music. (If you’re a Blackmore’s Night fan, you’re probably keen on physical media – vinyl, CDs, and the like… as you should be. It’s part of the ethos of this mythical, magical band and the glittering soundscapes they create.

The Aquarian chatted with a mellifluous Night to talk all things 25 years of fronting a band with immense musicality and personal ties, as well as honing in on what makes this group worth spending an evening or two with. (Blackmore’s Night comes to Atlantic City, New Jersey and Patchogue, New York on the 11th and 18th, respectively.)

You can read our interview with Night right here, right now, which will grant you even more insight into how she helped a hard rocker start an indie band and shift his musical trajectory… which has since become mythical and magical, as mentioned above.

There is an elegance to the rock and roll Blackmore’s Night makes and performs. What do you love most about these songs, this project, and these shows?

The songs are timeless. Many of them are from a bygone era, updated with new lyrics and arrangements. They are infused with olden – as well as modern day – instrumentation that make them hit the heartstrings of people with an emotional depth so that they still remain relevant in today’s times. They allow us, musically, to escape the stress and pressures of these times that feel overwhelming, returning [us] to a simpler time. The positive energy that we give from the music, and receive in turn from the fans, is electric. And the fact that the songs are timeless and also reach out to fans of all ages, gender, genres? We are breaking down walls and boundaries. In the concert venue when attending our shows, it’s like being in our home and sitting with friends. The melodic music has fans singing along or taking them on a musical emotional journey. […] It’s really a family show. Children up through grandparents attend as there is something in the music for everyone. We love what we do and no two shows are ever the same. Never knowing what songs are going to be played keeps us all on our toes… audience and band included! I love that the songs and the shows allow us to live our fantasy: one foot in the past and one foot in the now, creating our own reality as we go, and braving our own path through the enchanted woods for others to come along on this journey with us… even if it is just for a night.

What is the process for you Ritchie to kick start something? Who comes to who in terms of planning, creating, and laying the groundwork for a new record or tour?

Usually when we are writing new songs, Ritchie will come up with the melody line. Whether it’s inspired by a song from hundreds of years ago or a completely new original idea. He comes tome and asks me to sing his idea over his acoustic line. Then once we have a key worked out I usually go somewhere – a walk through the woods or on the shoreline or a drive – and just absorb the song. It basically tells me what it wants to be about. It’s really about channeling the melodyline and being open to the story it wants to tell. Once I have crafted the lyric we have our producer from LA come out and we go into our home studio and record it, fleshing out the rest of the instrumentation there. I play all the woodwinds that you usually hear: renaissance and medieval double reeds, gemshorns, pennywhistles, and recorders, as well as lead and backing vocals. Ritchie does all the guitars, hurdy gurdy, mandolas, mandolins, and nyckelharpa. Then we have the rest of the band come in to do their parts of violins, drums etc. We do probably six tracks and then take a break from it and go on tour. When we return from tour we revisit and see if we need to change anything or if not we move ahead with the next group of songs.

FOR MORE INFORMATION ON BLACKMORE’S NIGHT ON TOUR, VISIT THEIR WEBSITE!